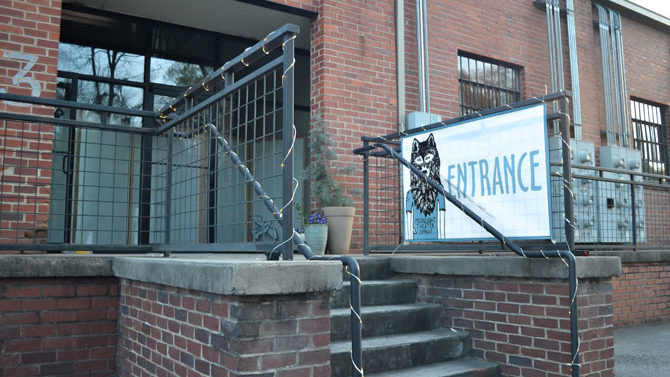 Nestled in the historic Leathers Building in Pulaski Heights, Moonlight Theater Company brings fun, play and laughter to Athens in a way locals may not have seen before. As the group’s website says, “We curate the playful, the silly and the downright stupid.”

Comedic actor Chase Brantley founded Moonlight Theater as a way to bring a unique brand of comedy to the Classic City. As he explains, it was not entirely intentional. “I really didn’t plan to open [a theater], but it came from this need to perform,” Brantley says.

Since its opening early this year, Moonlight Theater has presented more than 130 shows, averaging three to four a week. The artists range from local performers to touring acts from all over the country. Moonlight’s main goal, Brantley explains, is to accommodate artists willing to “take risks, be creative and play with the audience.”

Brantley, along with fellow Moonlighters Nicholas Hemerling and Michael Burgos, studied comedy and clowning at L’École Philippe Gaulier, a performing school in France. This type of clowning, however, does not involve makeup or a big red nose. Rather, it involves a method of comedic acting that uses more physicality and movement than you would traditionally see in a stand-up routine.

“The way we perform is more about playing with the audience,” Brantley says.

Whereas a standard stand-up comedy routine consists of a set of jokes delivered to the audience, the actors of Moonlight Theater use audience reactions and interactions to guide their performance.

“If you’re loving what you’re doing, then the audience loves you. A lot of what we’re pursuing is pleasure on stage,” Hemerling says.

The style of comedy performed by the Moonlight founders is popular in Europe, where the routine hews more closely to improv and skits, using movements and methods of play to create games and scenes.

“We know what our plan is on stage, but it carries a feeling of improvisation and being loose and fresh… like there’s almost a blurred line of if it’s scripted or not,” Burgos says.

Burgos has been traveling the past few years for his show The Eulogy, which he has performed all over the world. He is currently performing and touring his show Tiramisu.

Moonlight Theater has also made efforts to support traveling artists by starting a residency program to accommodate performers from outside of Athens. The program not only gives those artists a space to work on and showcase their craft and the opportunity to book shows at other venues, but provides them with free housing, a travel stipend, a weekly food budget and two shows a week.

Along with hosting seasoned performers, Moonlight also supports those wanting to learn more about the art of acting by offering comedy classes inspired by the teachings of L’École Philippe Gaulier. These classes are held on Sundays from 4–6 p.m. for ages 13 and up.

Next up, on Dec. 13–14, Moonlight Theater will present the second weekend of “When I Was Zorro,” a show by Swiss comedian Leo Mohr filled with “magic, cross-dressing, and top-level trickery,” followed by a Christmas-themed performance to close out the year. For more info, see the theater’s website, moonlighttheatercompany.com.