Planned Walk of Fame Will Highlight the Athens Music Scene 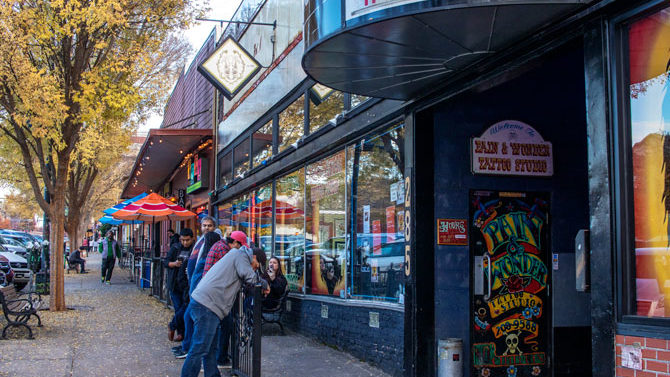 With all of the history that the Athens music scene holds, it may seem odd that there isn’t an obvious celebration of the scene downtown. Soon, that will no longer be the case.

Several weeks ago, the Athens-Clarke County Mayor and Commission approved the installation of a proposed “walk of fame” in downtown Athens. The walk will include plaques designed by a local artist dedicated to notable musicians, yet to be chosen, who got their start in Athens. The plaques will be placed on the sidewalks of Lumpkin, Clayton, Pulaski and Washington streets—an area where a number of music venues are located, including the Georgia Theatre, Morton Theatre, Flicker Theatre and Bar, the 40 Watt Club and Caledonia Lounge.

The project is a very long process, according to Didi Dunphy, the program supervisor at the Lyndon House Arts Center, who has been working on the development of the walk of fame. Since being approved by the commission, the walk has moved on to the next step of the process.

“We just met with the citizen user group that convened last week to review the artist submissions that we received from the call for art for the plaque, and the winning artist was selected,” Dunphy says, adding that the artist’s name will not be made public until early next year.

Once the chosen artist has made any revisions necessary, the ACC Commission will then vote on that design. Then, meetings will be held concerning the fabrication of the plaques for the walk. At a musical education event at the Lyndon House on Jan. 9, three presenters will talk about the heritage and history of African American music contributions. On Feb. 13, the first 10 people, bands or records to be honored will be announced.

While several popular musicians may come to mind when thinking about Athens’ musical history—R.E.M., the B-52s, Widespread Panic, Drive-By Truckers and the Elephant 6 collective, among others—the walk of fame aims to focus on some of the not so well known musicians who made notable contributions to the scene, according to Dunphy.

Others have been working alongside Dunphy, including Linda Ford, director of business services at the Athens Downtown Development Authority. “The ADDA received a tourism product development grant from the Georgia Department of Economic Development to go towards the walk of fame, so that was very exciting,” Ford says.

According to a press release from the Georgia Department of Economic Development, they have awarded “more than $64,000 in tourism product development grants to seven new and expanding projects across the state.” The grant is an effort to support and encourage Georgia’s tourism industry and promote new tourism products, such as the walk of fame.

Not only will locals and visitors be able to walk among the plaques and read as they go, but they will also be able to interact with the plaques through an app that will be launched along with the walk of fame. The app will have information, pictures and music from each plaque available at one’s fingertips.

According to Dunphy, they are planning for the first 10 plaques to be put in around June of 2020. Over time, however, more plaques can be placed along the walk.

In London, the first stone was recently installed in a similar walk of fame inspired by Hollywood Boulevard, honoring The Who. Up to 20 stones will be laid each year between two music venues, The Roundhouse and KOKO, in the Camden neighborhood. Nashville also has a music walk of fame in its downtown featuring such artists as Johnny Cash, Loretta Lynn, Jack White, Dolly Parton and Hank Williams Sr.