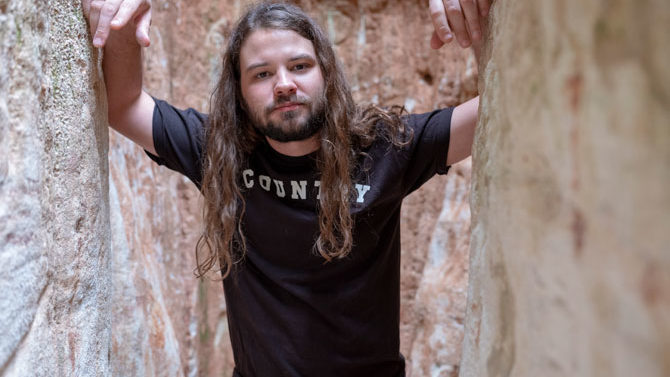 Ellaville native Brent Cobb didn’t come out of nowhere with 2016’s Grammy-nominated Shine on Rainy Day or its Southern-rock-inspired 2018 follow-up, Providence Canyon. Instead, his current status as one of country music’s best roots-bound singer-songwriters follows 12 years on the road, plus an unexpected bonding experience with a cool, older relative from out of town.

Cobb’s journey was fast-tracked by a chance first encounter with third cousin Dave Cobb, a Roswell native with roots in Atlanta’s music scene. For country music and Americana fans, he’s the successful producer associated with the meteoric rises of Chris Stapleton and Jason Isbell.

“Dave and I met in ’05 at his grandmother’s funeral,” Brent says. “I had to be a pallbearer for my great-aunt Christine. I knew her growing up. She was from where I was from.”

Word spread among the music-loving Cobbs that the relative few knew from Adam worked in Los Angeles as a record producer.

“I was skeptical, as we are sometimes about outsiders in the South,” Brent adds. “I was 17, nearly 18, and I asked him what he’d produced out there. He said Shooter Jennings’ Put the “O” Back in Country. That was my first favorite album of my late teens. When he said that, I couldn’t believe it.”

Brent gave his new favorite third cousin a copy of an early set of acoustic demos, planting the seeds for an ongoing working relationship.

“[Dave] and his wife were driving back to Atlanta to get on a plane to go back to L.A., and his wife talked him into listening to that little six-song demo,” Brent says. “He did, and two days later, he and Shooter called me on the phone. He’d played it for Shooter, and they wanted to fly me to L.A. to record a record.”

This fertile family connection behind 2006’s No Place Left to Leave and Brent’s subsequent albums continues a Cobb family tradition dating back to the regional folk roots of country music. “There’s an old picture of Dave’s grandfather and all of my great-uncles sitting there with their guitars and fiddles,” Brent says. “It’s a pretty cool old picture.”

Despite that early break and songs recorded over the years by Miranda Lambert (“Old Shit”) and Luke Bryan (“Tailgate Blues”), Brent’s story over the past decade-plus revolves around constant touring, not Music Row or Hollywood hobnobbing.

Last year, Brent opened for Lambert and Jon Pardi on the Livin’ Like Hippies tour. He also spent parts of 2017 and ’18 on Stapleton’s All-American Road Show tour. Much smaller venues replace arenas and amphitheaters when the younger Cobb cousin headlines. This crowd-size roller coaster is a common ride for Brandy Clark, Lori McKenna and other songwriters to the stars who also deliver fantastic solo albums and live sets.

Yet a mix of cool confidence and down-home humility allows Brent to keep his topsy-turvy tour situation in perspective. “I treat every crowd the same,” he says. “I’m glad to play in front of 20 people as much as I’m gracious to play in front of [a large crowd]. I’m grateful to play for anybody who shows up, really. Playing on those big stages, I try to treat it the same. I’m just glad to be there.”

As a good country songwriter should, Brent writes about what he knows: his roots and his relentless tour schedule. This shows on Providence Canyon, one of the best mixes of old-time country and Southern rock since fellow Georgia native Travis Tritt first hit the big time 30 years ago.

Named for the South Georgia landmark dubbed the “Little Grand Canyon,” the album celebrates Lynyrd Skynyrd’s appreciation for the Deep South’s beauty and John Denver’s fascination with the open road. For instance, “King of Alabama” commemorates murdered country singer and former University of Alabama football player Wayne Mills from the perspective of a fellow Southern boy and road dog.

With a bigger, bolder sound developed after months on the road with Stapleton, Brent’s current live set can either wow crowds of 20,000 or leave barflies wondering why these captivating story-songs never get played on the local country station, depending on the situation.