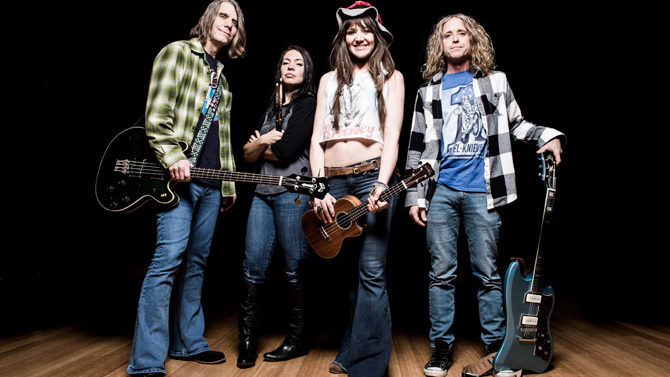 A few weeks back, it looked like Athens would get a double shot of Raelyn Nelson. Willie Nelson’s granddaughter was slated for two local appearances at the Georgia Theatre: May 4 with comedic duo mmhmm and May 10 with her country-rock outfit the Raelyn Nelson Band. Unfortunately, Nelson and fellow mmhmm member Hannah Fairlight, a musician and actress known for her part in the Pitch Perfect films, recently decided to shelve their outlet for bawdy, twangy joke-songs.

Don’t fret if you were amped for some lowbrow laughs. The Raelyn Nelson Band’s blend of Loretta Lynn’s homespun wisdom and Cheap Trick’s contagious hooks leaves plenty of breathing space for its namesake to inject doses of her prior band’s absurd yet adorable humor.

“I think, my whole life, I’m just trying to be funny and trying to do something funny,” Nelson says. “If you see a Raelyn Nelson Band show, it kind of comes with it.”

“When I was a little girl, my daddy died,” she says. “I spent a lot of my childhood crying and stressed-out that everyone else was going to die. I hit my late teens, and I was like, ‘Man, I’m tired of crying. I just want to laugh at everything. I’m going to find the humor in anything.’”

Nelson grew up on country and gospel music, and those childhood influences still shape her songwriting, as heard on the single “Mama Cry.” She became a converted rocker after meeting her current bandmates.

“These guys opened the world of rock and roll to me,” she says. “They’re just a bunch of old rockers. When we started playing together, it was totally different from what I was used to. It was the only actual band—other than string band in high school—that I’d played with, and it was a lot of fun. It’s loud, we move around, and it’s way more fun to me than just standing there and singing a song.”

This countrified take on rock involves more than turning up the Nelson family’s outlaw country tradition to 11. Nelson plays electric ukulele, adding a folk element and a fun gimmick to her band’s stage show.

“[Guitarist Jonathan Bright has] a studio in his backyard in Nashville,” Nelson says. “We were writing songs and recording them over there, and he’d just finished up a Replacements cover album that was all done in ukuleles. He had like 17 ukuleles around the studio, and I started picking them up in the down time, and he taught me some chords. I couldn’t think of another country band or a rock band where somebody’s fronting it with a ukulele… We just had to figure out how to get it loud.”

By incorporating a small instrument into her big musical dreams, Nelson found yet another way to keep things funny. “You cannot not have fun when you’re playing uke,” she adds. “Plus, I can do a lot of cool rock moves, because my instrument’s tiny.”

As for how one of the most famous icons in American culture fits into the picture, Nelson says she writes songs on a guitar her grandfather gave her at age 14. That guitar has survived a fire, proving to be nearly as resilient as Willie’s worn-out Martin N-20, Trigger.

Willie’s impact on the Raelyn Nelson Band goes beyond that guitar or the group’s regular appearances at his famed Fourth of July Picnic. He’s selfless with his limited free time and hard-earned wisdom.

“He’s always told us, ‘Don’t be an asshole,’” Nelson says. “That’s his motto, and he lives that, for sure. He’s always for the underdog. If we’re having a conversation and somebody’s bitching about someone, he comes through with this wise proverb that’s like, ‘We should be on this guy’s side because of this.’ He should’ve written books of the Bible or something.”

The younger Nelson could easily develop into a wise sage in her own right, considering how she developed a sunshiny disposition in the face of tragedy—an attitude she shares through her own quirky blend of classic country storytelling and party-rock exhilaration.