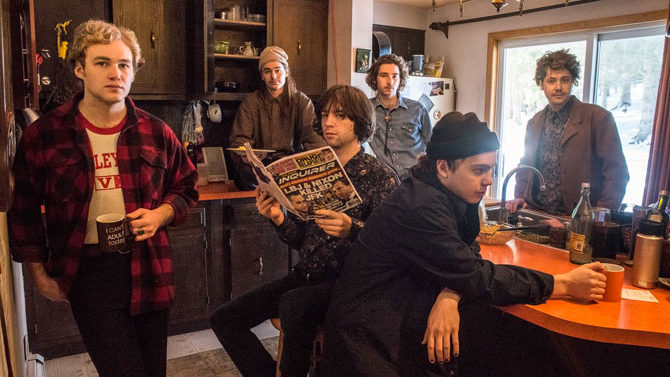 Put on your birthday suits and surf through psych-rock waves in a bluesy sea with The Nude Party Friday, Oct. 12 at Nowhere Bar. The New York-via-North Carolina band blissfully totters between British Invasion and classic Southern rock, leaving listeners singing and swaying along to every chorus.

The group made its debut in 2016 with the Hot Tub EP, and while it’s only seven songs long, it’s a full-throttle trippy rollercoaster ride of lo-fi garage rock. In July, the guys brought a self-titled album to the table that’s sizzling with rhythm guitar and retro delay. Single “Chevrolet Van” highlights lead singer and guitarist Patton Magee’s easygoing sing-speak drawl, which is underscored by twangy bass tones. (Not to mention the hilarious video that goes along with it, which makes the music that much more fun.)

The Nude Party is a conglomeration of childhood friends and stepbrothers who came together musically during their freshman year at Appalachian State University in Boone, NC. At the time, they were just college students interested in throwing killer parties, but today, they tour all over the country. Magee says what’s changed the most since 2012 is “we learned how to play our instruments. There were six of us, and we all just needed to pick an instrument. It just so happened that no two people wanted to play the same one, so it worked out well for everybody.”

Initially, there was more to the band’s name than just kitsch. At a mystical abode in the Carolina mountains known as the 505 House, the group held transcendental ragers with music and, yes, full nudity. As the group has gained more traction over the years, it’s had to get rid of this part of the spectacle, but the name stuck.

The Nude Party strives to produce a contagious and authentic sound that creates a visceral bond with the audience. Its members say they put their heart and soul into their work and wouldn’t want it any other way. As rock and roll has declined as the modern mainstream genre of choice, Magee says, “If you’re doing it now, I think you’re just doing it because you love it.”

Last year, the sextet moved to the Catskills and has been working with Oakley Munson of Atlanta’s Black Lips. Magee says Black Lips “were recording their last record upstate and needed a new drummer, so we came and filled in, joined the band and figured we might as well find property up there. We’ve got a big house for all of us to live there.”

Living in a town of 900 people, most of them older folks, is a very different experience from the college town The Nude Party knew and loved. The band may not always have people over like it did at its party house, but it does play occasional local shows around town. “We do it more just for fun, ’cause it can be a lot of fun,” says Magee. “Nobody plays up there, so people are pretty stoked.”