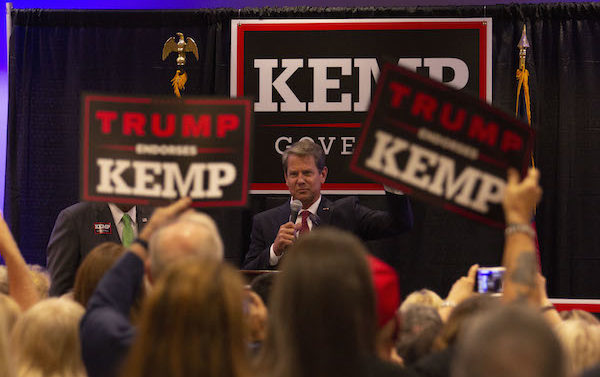 Amidst a swarm of police and protesters, Donald Trump Jr. came to town on Tuesday. It was kind of a thing.

The Classic Center was packed out with GOP supporters—and about 100 protestors who later walked out en masse. Meanwhile, a small group of protestors gathered on East Washington Street in a fenced-off area police set aside. 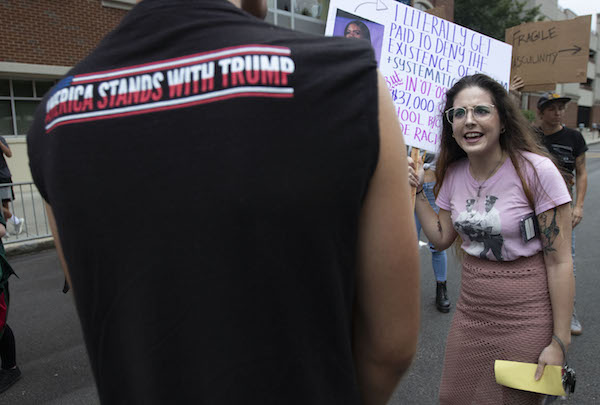 After local Republican House candidate Houston Gaines led the Pledge of Allegiance, Guilfoyle pumped up the crowd by referring to the state as “Trump Country,” talking about building the “big, beautiful wall” and saying “the only knee we take is at church,” in reference to NFL players like Colin Kaepernick protesting police brutality.

“[Kemp] is willing to put it all on the line again—for you, for the hardworking men and women of Georgia that want to make sure that they have great paying jobs, that we end those job killing regulations that the Democrats had in for so many years,” Guilfoyle said. “No more from job killing Democrats, community organizers passing out pamphlets. We want real hard working Americans to make sure we have our military strong, that they respect our law enforcement, the fine men and women that serve.”

While Democrat Stacey Abrams was campaigning in San Francisco, Kemp said he was on a five-day tour in Georgia. “California money can’t buy a Georgia race,” he said.

The crowd of Kemp supporters erupted in cheers when Don Jr. was introduced. He opened his speech by bragging about being on the phone with Herschel Walker, whom he said was “a family friend.” (The Georgia football legend played professionally for Trump’s New Jersey Generals in the short-lived USFL.) 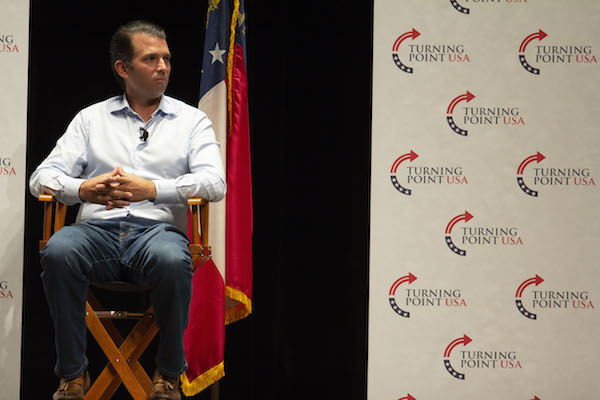 Trump Jr. spent much of his speech attacking former President Barack Obama for his handling of the economy and lack of business experience. “He never signed a front of a paycheck. He never made payroll. He never had someone’s livelihood and their families’ well-being depending on his success. How can we expect him to do anything? We shouldn’t have, and we didn’t,” said Trump Jr., whose father filed for bankruptcy six times.

Then he moved on to foreign policy—moving the U.S. embassy in Israel to Jerusalem, pulling out of the Iran nuclear treaty and launching an air strike against Syria.

“Former president: ‘We drew a nice red line in Syria.’ They slapped us in the face. We drew another red line, and then they did it again,” Trump said, mocking Obama. “Well, they tried doing that to us, so we sent 57 Tomahawk missiles into it… I love target practice.”

He concluded his speech saying Georgia “needs a fighter” and “a guys with guts and conviction to do it… We need guys like Brian Kemp in the governor’s office.” 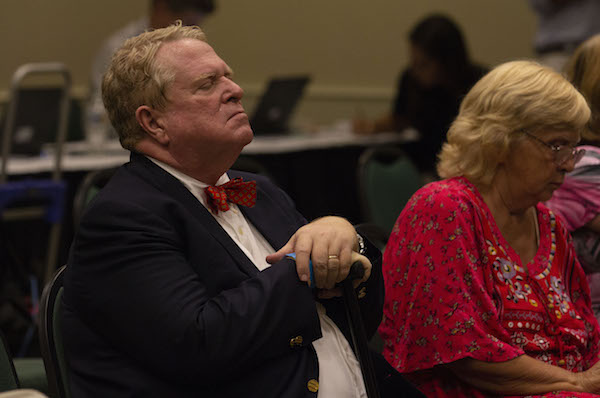 Kemp supporters at a $50-a-head rally for the gubernatorial candidate.

Kemp’s brief appearance was met with a mix of cheers and boos. “I know some of my dissenters are here tonight,” Kemp said. He took another stab at Abrams for fundraising in San Francisco and criticized Sen. Elizabeth Warren, who was in Georgia to campaign for Abrams.

Before the Turning Point event, roughly 100 protestors dressed in black marched from the Arch to the Classic Center. The protestors, most of whom were students, sat in the back of the first floor of the theater.

Kaela Yamini, president of the UGA chapter of the NAACP, said she helped organized the protest. 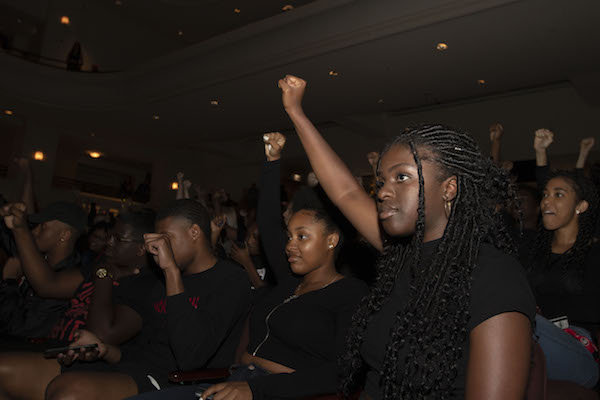 Protesters inside the Classic Center theater.

“We decided to come out because we feel that some of the participants on the panel have views that are very offensive to a lot of people here,” Yamini told Flagpole. “We just want to let them know we’re here, and we don’t necessarily support what they’re saying. We’re not coming out of a place of violence or a place of anger. Just to show we have a voice here, and we understand what’s going on. We don’t necessarily agree with them.”

Owens called the protestors “petulant children who need attention” and asked when the group would leave.

The panel continued on with their discussion, but protesters began screaming over the panelists. An argument broke out between two men. Police broke up the fight, and some protestors were asked to leave.

Trump Jr. said last week that he was scared for his sons more than his daughters after the Kavanaugh hearing. The panel repeatedly went back to the “character assassination” of innocent men. “Toxic masculinity doesn’t exist. Toxic femininity does,” Owens said.

Since 2016, TPUSA has maintained a “professor watchlist” that lists college instructors whom they believe “discriminate against conservative students and advance leftist propaganda in the classroom.” 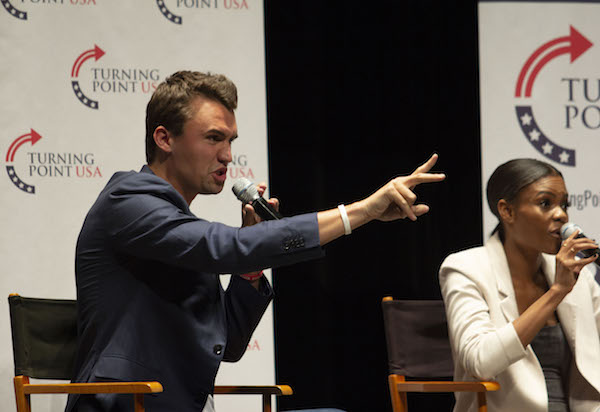 Kirk asked the crowd of students if they have ever felt judged or were graded differently by a professor for being conservatives. A majority raised their hands.

Owens, an African American, said black history is being taught wrong. She left college thinking Republicans were racists, when “it was the other way around,” Owens said.

Moving on, the panel said celebrities are only voicing their support for Democrats for attention and specifically referred to Taylor Swift encouraging fans to vote. “Taylor Swift doesn’t know anything about politics,” Kirk said.

Yet, “the biggest hero in America right now is Kanye West,” Owens said. West has drawn criticism for his support of Trump, a bizarre Saturday Night Live appearance the week before last and calling for the repeal of the constitutional amendment banning slavery. He is scheduled to meet with the president on Thursday.

Owens later clarified and said the statement was “hyperbolic” after a student mentioned men and women who serve in the U.S. military. Comparing West to Swift, Owens also said “Kanye West has not told people who to vote for,” despite wearing a MAGA hat publicly.

While attendees were asking questions, the protestors raised their fists in a black power sign, then walked out of the room while the rest of the crowd chanted “USA USA USA.”

A mix of students in support and against the panelists’ views spoke out and asked questions. Most notably, a few students said rhetoric used throughout the event was “hateful.”