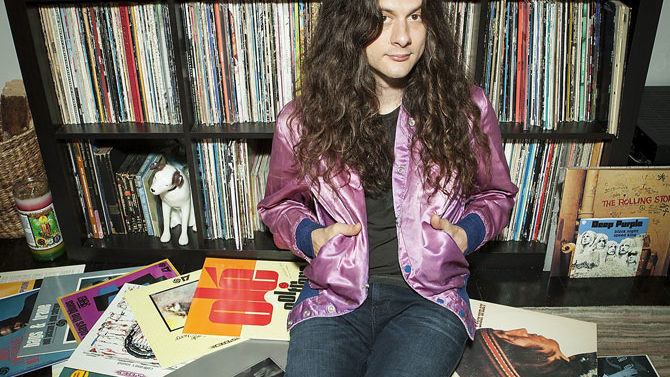 Compared to the bleary, blurry home recordings released at the beginning of his career, Kurt Vile’s most recent record, 2015’s B’lieve I’m Goin Down, is a much more polished effort. Even now, though, everything the 37-year-old guitarist makes seems to maintain the slow drag of a lit cigarette resting on the rim of an ashtray, a smoldering little sun burning brightly in the dark, creeping almost imperceptibly to its terminus.

Vile hasn’t hit the filter yet. With each of his half-dozen full-lengths, he’s sold a few more records and played slightly bigger venues. There hasn’t been one breakout moment, but day after day, he works his way farther up a ladder, getting closer to the blinking “Rock Star” sign at the top.

Though his music draws heavily on working-class heroes like Springsteen, Dylan and Neil Young, it’s that steady, hard-earned ascent that gives Vile his blue-collar bona fides. He’s watched others leapfrog him to stardom overnight, but he’s content to stay the course.

Vile’s last record sold better than any before it, and ended up near the top of numerous year-end lists. The first track on the album, “Pretty Pimpin,” hit No. 1 on Billboard‘s Adult Alternative chart. Success is hard to quantify in the music world, but this was a tangible milestone.

“That never happened to me before.” Vile says. “I [have seen] my fans change on this record. We’ve had to make some crew adjustments and become more professional. We had a bus in America for the first time. All those kinds of little things.”

The current state of the music economy all but necessitates a working-class ethos, regardless of genre or style. Aside from the hustle and sacrifice required to “make it” as one up-and-comes, most folks need another job to finance their artistic pursuits. As a solo performer working his way up through the Philadelphia DIY scene—where bands play in the same burnt-out warehouses and factories yesterday’s laborers labored in—Vile’s work was easy to frame in a blue-collar context.

Maintaining that approach as his profile has risen is a testament to its authenticity. Though he tours plenty and recorded B’lieve in 10 different places (including the Athens studio of his touring drummer, Kyle Spence), Vile still spends most of his down-time in the Philly area, near his family and the “roots-slash-psychedelic record-nerd scene” he emerged from. He has his sights fixed on the future while perpetually keeping his past in mind.

“The thing I like about the early stuff is that it’s like a real moment captured, letting your guard down, recording in your house, not knowing what’s going to happen tomorrow,” he says. “[There’s] a lot of passion in those little pop songs. I’m trying to get back to that. I’m setting up a home recording studio. But I don’t want it to sound shitty. I like the idea of capturing those recordings at a little higher fidelity, but letting your guard down. Capturing the vulnerability. I’m still working that in, keeping my roots there.”

He doesn’t seem surprised by his rising profile—just the opposite, actually—but he’s not content yet, either. He speaks with the air of a train passenger, gazing out the window to take in his surroundings, all the while feeling a little restless, knowing he’s not yet where he wants to be. He is as cognizant of his destination as he is of his point of departure, even if both can get a little fuzzy.

“I want to be a little more popular and sell a few more records each time,” Vile says, “but I want to put some things out myself on the side, or get more involved with show biz. All those kinds of things, but ultimately staying true to the music and not selling out.”