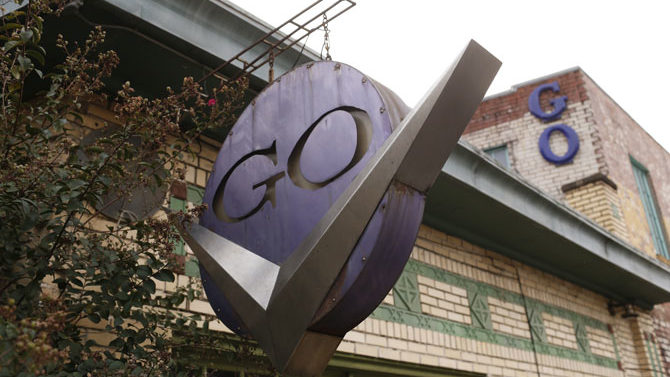 It’s karaoke night at Go Bar, like it has been every Thursday for more than a decade. Dots of light reflecting off the disco ball perforate the otherwise uniformly blue tint cast over the inside of the bar, though most of tonight’s patrons are watching from benches outside. The performers’ talent levels range from pitch perfect to, let’s say, imperfect, and their song selections come from as varied a spectrum. Their diverse attire reflects the the lack of consensus on how much clothing this gonna-get-cold-any-minute time of year requires for a comfortable night out.

Thomas Hedger, a Go Bar co-owner since it opened in 1999, is behind the bar, where he is almost every night. Dr. Fred, the pseudonymous MC (who actually does have a PhD), is in his familiar spot behind a laptop, whence he’s run more than 400 of these shows since he took over hosting duties in 2008.

A plurality of the requests tonight have been David Bowie songs, but even folks singing They Might Be Giants or Johnny Cash seem to be attempting a Bowie impersonation for at least a few measures. Eventually, it’s Dr. Fred’s turn. He shuffles to the stage in slacks and a grey golf shirt and continues the theme with an early ’80s Bowie track.

Maybe it’s easier to be yourself when you can be someone else for a song or two, but Dr. Fred seems comfortable despite being a bit of an outcast here, politically speaking. Athens is a blue oasis in a desert of Georgia red, and Go Bar tends to draw a particularly left-of-center crowd. Dr. Fred, though, is a lifelong Republican and a Donald Trump supporter. “It’s not very easy to find Republicans who are into the music scene in Athens,” he says.

That’s true of this year especially. A recent Monmouth University poll found 70 percent of respondents saying this election has brought out the worst in people. Seven percent said it has cost them a friendship.

Dr. Fred’s relationship with Hedger, an outspoken Hillary Clinton stan, seems to be holding strong. They’ve been friends for years, basically since Dr. Fred started performing karaoke at Go Bar in 2004, and more so when he began hosting four years later. Though their banter and bickering can get a little heated—both are prone to gloating when a new poll puts one’s favored candidate in a good light or a recent gaffe puts the other candidate in a bad one, and neither can resist engaging when the other brings it up—the arguments are mostly quarantined to Facebook comment threads, and never seem to spill over into real life.

The similarity of the two men’s senses of humor—both see electoral politics as mostly absurd—seems to be a firewall for that compartmentalization, and they each concede more common ground than their partisanship typically connotes.

“I don’t think Dr. Fred is one of the deplorables,” Hedger says. “I think he’s fiscally conservative and more socially liberal than he likes to let on. At least he’s a Trump supporter who acknowledges the Earth is more than 6,000 years old.”

“There’s much more agreement on what the problems are than most political people would like to admit,” Dr. Fred says. “I see the same problems that Democrats see. I just don’t see their solutions as being solutions.”

Go Bar has a reputation for being LGBTQ-friendly and generally inclusive of any community in need of a safe space. Hedger does not believe Dr. Fred compromises that status, even if he supports a presidential candidate who, if taken at his word, will from his first day in office work to obliterate the freedom and basic humanity of the sorts of folks who need those safe spaces in the first place.

“We want a diverse clientele with diverse opinions,” Hedger says. “It makes it more interesting. We don’t want to be preaching to the choir every day and night. No one is excluded, even if they’re a Trump supporter. We just laugh at them.”

You’ve no doubt heard people brand this election as the most important ever, but while its ramifications are many and deep, that same apocalyptic rhetoric seems to pop up every four years. For some people, singing “Let’s Dance” to a couple dozen people on a Thursday night is a higher priority.