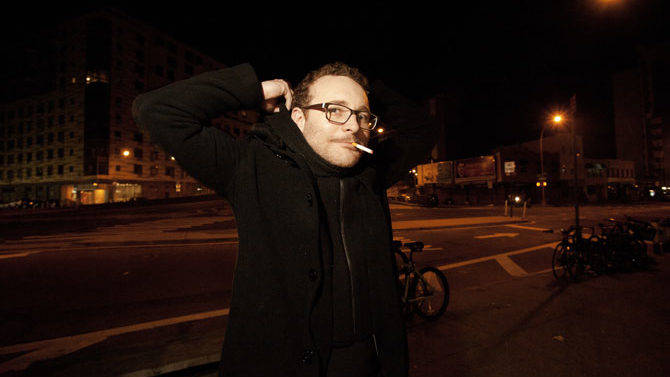 James Adomian is ready to be himself again.

Adomian is stepping back into the world of stand-up comedy after touring the country as an ersatz Bernie Sanders, impersonating the Vermont senator and former Democratic presidential candidate alongside Anthony Atamanuik’s Donald Trump in a series of mock debates. Adomian’s performance in Athens will be just his second stand-up show since the Sanders stuff began about a year ago. (He’s in Asheville, NC the night before.) Though his sets typically include some impressions, he’s looking forward to stepping out of character.

“It’s like playing a different style of music,” Adomian says. “When I’m in character as Bernie Sanders, it’s all Bernie Sanders, so you’re living in a world of facts and numbers and statistics and very progressive ideas. When it’s me doing stand-up, I can do whatever I want. I can talk about my life. I can dance around from impressions to stories to whatever I want to do. I’m a gay performer, so when I’m talking as myself, that comes out, whereas if I’m doing a character, I’m limited to who that person is.”

Not that he seems to mind those limitations. On stage and down a long CV of television, podcast and web-video work, Adomian is no stranger to impressions, which he often takes to a strange place. A Jesse Ventura impression can end up with the former wrestler and Minnesota governor on a road trip with Ice-T. A Paul Giamatti impression can portray the actor as a dyspeptic alt-righter, or his Bernie Sanders rendition can turn the democratic socialist into a “pay pig.” (Look it up.)

When it comes to impressions, Adomian tries to avoid the common ones (no De Niro, no Walken, no Schwarzenegger), but concedes that it’s impossible to be the first one to come up with a new one. “You think you’re the only one to do something, [but] there’s always somebody at a local radio station who’s done anything,” he says.

Some of Adomian’s impressions are of people he doesn’t like, such as the talk-radio personality Tom Leykis, and others are of people he admires, like Sanders. The people he chooses to impersonate tend to have distinctive voices as well as distinctive points of view. They are often celebrities—Adomian’s Gary Busey impression is among his best—but he’ll also go after someone a little more obscure if he’s drawn to him. Take, for example, his impression of Slovenian philosopher Slavoj Å½iÅ¾ek, an iconoclastic firebrand who speaks like his mouth is full of Nutella.

A Å½iÅ¾ek impression might fare a little better in a college town like Athens, but the predicament illustrates a tension at the heart of stand-up comedy. On one hand, Adomian is himself on stage, and he owns his words even when they’re spoken in character. As with any other art form, self-expression is key. But Adomian is also aware that, as a comic, his job is to make people laugh, and he doesn’t get paid for staying true to himself.

Still, he doesn’t necessarily think those two motivations are in conflict with each other. He goes out of his way to play not just different sorts of venues—comedy clubs, but also music venues, empty hotel basements, grand theaters, rowdy bars where nobody is listening—but for different audiences, too. Naturally, some nights go better than others, but he says lighting and acoustics tend to have a larger effect on the response he gets than do the political leanings of his audience.

“People have a way of laughing at things they might not necessarily agree with,” he says. “Sometimes, performers have ways of changing people’s minds in real-time on stage. I don’t have the luxury of usually performing for gay crowds, and I wouldn’t necessarily want to. My favorite kind of audience is when there’s different kinds of people in the room. There’s some effort put into, ‘Here’s my point of view, and I want you to agree with it,’ and there’s part of me that’s ‘I don’t give a fuck if you agree with it or not.’”