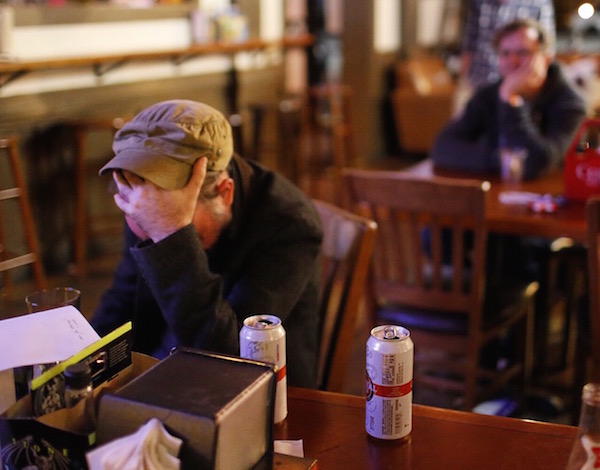 Most of us can empathize with this guy watching the results come in at Hi-Lo.

Most Flagpole readers probably are still processing Donald Trump’s stunning upset, the biggest since at least Harry Truman in 1948. If it’s any small comfort for local Democrats, you did just about everything you could to elect Hillary Clinton.

Still, Trump won Georgia handily, 51-46, which is about the usual margin we’ve come to expect here. I have thoughts on the national race—though I wouldn’t blame you if you don’t care, given the pundits’ record—and we’ll get to those, but first, some more local results:

• Voters opted to continue ESPLOST, a 1 percent sales tax for local school construction, by a 72-28 margin.

• Amendment 1, aka the Opportunity School District, aka the state school takeover, went down in flames 73-27 locally and 60-40 statewide.

• As was the case statewide, a number of Democrats crossed over to vote for Republican Sen. Johnny Isakson. Democrat Jim Barksdale won Clarke County 59-36, but Isakson won re-election 55-41. 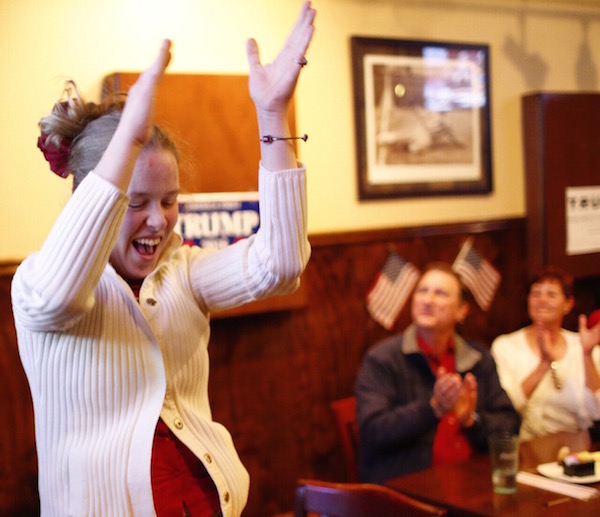 Austen Tullier celebrates Donald Trump’s win in Florida at the Athens GOP’s election-night party at Loco’s on the Eastside.

Now. A lot of talking heads are talking about a white backlash. That’s not exactly what’s happening here. Yes, rural white voters overwhelmingly backed Trump. However, this election was more about President Obama’s base abandoning his chosen successor.

By now you’ve probably seen that overwhelmingly blue “how millennials voted” electoral map floating around social media. Don’t believe it. Millennials turned out in significantly lower numbers this year than in 2012, and Clinton won only 51 percent of the under-30 vote, compared to President Obama’s 60 percent. Clinton won 56 percent of first-time voters; Obama won 69 percent in 2008.

The gender gap grew—not because women were put off by Trump’s misogyny, though, but because men gravitated toward him. Exit polls show that women favored Clinton by 12 points, compared to 11 for Obama four years ago. Men favored Romney by 7 points but Trump by 12.

Nor did minority voters help Clinton. She won 88 percent of the African American vote, seven points lower than Obama. Trump won 29 percent of the Latino vote, two points higher than Mitt Romney. Combined, those voters made up 37 percent of the electorate—the same share as 2004, when John Kerry lost to President George W. Bush.

You can also point the finger at Gary Johnson, Jill Stein and their supporters. In key states like Florida and Pennsylvania, just a fraction of third-party voters would’ve put Clinton over the top. Stein received 51,000 votes in Michigan, where Clinton lost by 13,000, and the story was the same in Wisconsin.

But look, I don’t know what’s going to happen. As was proven last night, none of the pundits or political scientists know anything. Maybe, soon after January 20, 20 million people will lose health care, millions of undocumented immigrants will be rounded up and deported, the U.S. will be at war with Iran and North Korea, abortion and gay marriage will be illegal again and Clinton will be a political prisoner.

Or maybe we’ll get the President Trump who wanted to raise the minimum wage, tax millionaires, renegotiate trade deals to benefit American workers, supports a path to citizenship and was pro-choice his entire life until he decided to run for the Republican nomination. Who knows? No one does—and that’s part of what makes him so scary—but all one can do, other than despair, is try to be optimistic.

After the shellackings of 2010 and 2014 and yesterday’s results, it’s now clear that Democrats have been buoyed only by Obama’s personal popularity and need to seriously recalibrate. The Obama coalition only works for Obama. What do they do, though? Moving to the center will only further put off liberals. But moving to the left won’t win them back a white working class that seems to be mostly concerned with cultural grievances and has told liberals at the ballot box over and over that they don’t want their help.

I can tell you that Democrats definitely need to refocus on state and local elections. For years they’ve focused almost solely on winning and holding the presidency. The bench is woefully thin. Republicans will control at least 34 states next year. Another census is coming up soon, so unless Democrats flip states in 2018 and 2020, Republicans can once again draw new district maps that will consolidate their control of state governments and the U.S. House until 2022.

There’s some hope of that, at least in Georgia. Everyone expected Gwinnett County—the poster child for Georgia’s changing demographics—to flip at some point, and it did yesterday. Far more shocking is that Cobb County—the richest vein of Republican votes in the state—also turned blue.

This election was a reckoning, and another one might be coming soon. Republicans will have complete control of the federal government and the Supreme Court. Yet most of their policies are unpopular. If Trump proves to be as awful as most Democrats (and not a few Republicans) think he will be, look for an enormous backlash in 2018. In the long run, Trump may be the best thing that’s ever happened to Democrats, because all the apocalyptic warnings about what the GOP would do in power are no longer hypothetical.

Local Theater Can Help You Cope in Times of Darkness