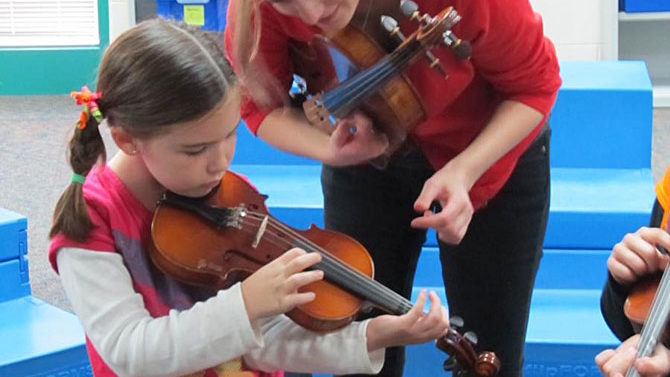 Classically trained musicians are often stereotyped as looking down their noses at pop musicians for being less academic or less committed to fluency. Pop musicians are often thought to make fun of classical musicians for being stuck to the page. An increasing number of Hugh Hodgson School of Music students at UGA are bucking both stereotypes by jumping into the local music scene and popping up in unexpected places throughout the Athens community.

One such student is Evan Tyor, a 2015 HHSOM graduate. Tyor is classically trained in voice and plays guitar, banjo, bass and drums. He grew up playing folk, country and bluegrass in Atlanta and Charleston, SC, and found Athens’ downtown rock scene more familiar than its classical, campus-centric counterpart. Once at UGA, Tyor began playing with other artists with HHSOM ties, including Avery Draut of Wanda, the Skipperdees, Drew Kohl, Pennyboy and Fine Lines.

Tyor also played in an LCD Soundsystem cover band called TLC Soundsystem; Franny, a prog rock band consisting of music students from other schools; and Einschlagen, which he calls a “kinda-punk-rock-garage-kinda” band. Now, Tyor plays in Scooterbabe, a pop-punk group that recently released an acclaimed debut full-length, The Sorrow You’ve Been Toting Around. As his experience indicates, Tyor says he has seen “a fair amount of crossover from the classical world” in the Athens music scene.

This crossover is also exemplified by HHSOM senior Josh Klein, who plays trumpet with local dance-pop group Partials and a new project called Mister Tie Dye, as well as sitting in with other Athens groups that want horns. Klein says his desire to perform in this capacity stems from his middle-school fantasies of performing onstage and having huge crowds cheer for the music—which doesn’t tend to happen in the middle of a symphony.

Initially, Klein fantasized about shredding on guitar or wailing on vocals. Yet he got into the world of rock and roll a little differently. “I ended up being good enough at trumpet to get into the scene I dreamed of,” he says. “I applied the skills I had to my dream and everything else work[ed] itself out.” Sometimes, he found, the special skills that classical students work hard to attain and refine while pursuing their degrees are just what non-classical bands need.

Many others at HHSOM have explored both sides, including pianist Greg Hankins and composer Cody Brookshire. Hankins, the leader of the Whitehall Jazz Collective, says, “I have always worn both hats ever since I became a musician, so I feel comfortable in either arena.” Much of Brookshire’s work occurs within HHSOM, but in the past six years, he has collaborated with a long list of Athens musicians. He finds the Athens scene to be musically diverse, an exciting quality for a composer.

Music students find ways to use their talents beyond the stage, as well. One such way is through the UGA String Project. The community outreach program, directed by HHSOM faculty Skip Taylor and Ruth Monson, is part of the larger network of the American String Project Consortium and sponsored by the American String Teachers Association. Every semester, music education students at HHSOM go to a local elementary school to teach children about strings. In classes separated by instrument and age—not ability—the young students learn from their college-age teachers: posture, correct bowing technique and bow hold, scales and a few songs. At the end of the semester, the students perform a concert for friends and family.

This opportunity provides ample experience to the college students, preparing them for life after graduation. On the flip side, String Project exposes elementary schoolers to early music-education. Whether String Project allows these students to simply enjoy and understand classical music a little more, improves the quality of local middle and high-school orchestras or produces future pop or rock musicians, the program greatly benefits the Athens community.

Another HHSOM-affiliated project is Classical Revolution. Part of a national organization by the same name, Classical Revolution allows for “high-quality chamber music to be played in non-traditional settings.” Run by Maria Kindt, who used to be a UGA music student herself and has been highly active in the Athens scene as a member of Family and Friends and other groups, the Athens chapter has been going strong since September 2015. Starting out at The Foundry, Classical Revolution now meets at Hendershot’s once a month for a three-hour session.

The concert series gives music students an opportunity to showcase what they are learning in school, in the community. Performers do not have to be students, however; any classical musician is welcome. For the wider community, Classical Revolution is a chance to experience classical music at none of the cost it takes to attend a symphony and in a more relatable, relaxed environment.

Above all, this merging of town and gown provides both sides a chance to hear and understand where the other is coming from. That sort of cross-pollination may have been rare in the past, but to many of today’s music students, getting involved outside of the realm of classical is a no-brainer. Hankins says, for him, it was never a question. “I am a musician, therefore I am involved in music.”