Talking Politics With the Drive-By Truckers 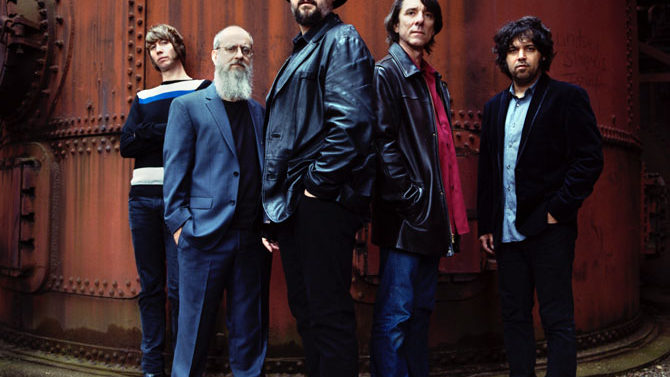 On their new record, American Band, hometown heroes Drive-By Truckers up the ante, blending guitars with scathing commentary about gun culture in the U.S.—a bold move during this divisive election year. The group, which has typically tackled political issues in hindsight (see Southern Rock Opera and The Dirty South), deploys a more direct approach this time by writing about the present. Flagpole spoke with songwriters Patterson Hood and Mike Cooley about the band’s newfound energy after two decades of tearing up the road and the inspiration behind their new album.

Flagpole: American Band is very political, but it feels like it’s addressing some topics that we haven’t really been able to discuss in public for the last few years without the vitriol attached.

Patterson Hood: It’s like that Dixie Chicks documentary, Shut Up and Sing. I mean, people will say that to us. And it’s like, “Well, fuck you.” If we’re not allowed to discuss these things, then who is allowed? Is it only someone with a law degree or someone who holds office that can discuss it? Or, is it just the uncle that reads Drudge Report or Breitbart? Are those the only people that are allowed to discuss politics?

Also, as a Southerner, anytime you see Southerners talking about anything on TV, they’re usually pointing the camera at the biggest idiot in the room. And they say terrible, terrible things. I’d just like it to be known that not all of us feel that way. You know, I’ve got the same accent as that idiot, but I’m not an idiot. And I don’t have the same beliefs as that idiot. I’m tired of that sort of guy being the one that represents my supposed point of view. I don’t want to open my mouth and for people to assume that I’m going to say some ridiculous shit.

Even in the reddest state, if the Trump supporters take Alabama by a 10-point margin, that’s still 40 percent of the populace [who didn’t vote for him], and that’s a substantial number of people who feel the polar opposite of that. But that voice isn’t heard. I’ve been a part of the vocal minority for a long time. And this record just sort of lays it out there.

FP: Trump is sort of the perfect example of someone catering to that supposed Southern ignorance, and he’s from the North. People want to talk about gun violence as if it’s only gun-toting rednecks from the South fanning the flames. The same with police brutality—it’s a national issue. Philando Castile was killed in Minnesota. These are not North versus South problems.

PH: It’s just not. In the liner notes, I talk about the divide between rural and urban. But it goes beyond that, too. I mean, there certainly are people in every city that fall into that demographic. I think the whole rural-urban divide is more plainly lit than North-South or even coastal states versus middle America. You can take Georgia, which is supposedly a red state, but you get to the cities or the college towns, and it’s totally different. I lived for 21 years in Athens, and I saw Athens go for Kerry almost 70 percent. And I’m pretty sure Sanders did pretty comparable to that. [Editor’s note: Sanders won 49 percent of the Democratic primary vote in Athens.]

I live in Portland, OR now, which is one of the most liberal cities in America—probably in the world. But, if you drive in any direction out of town for 10 minutes, you’re gonna see Trump signs. Many of us assume that the South is still so backwards and conservative and the North is sophisticated and progressive. The regionalism of political affiliation is making less and less sense now.

Mike Cooley: It really never was that way. I’ve always said that the Republicans greatly underestimated how well the Southern strategy would play nationwide. And it shouldn’t have come as any surprise. I mean, I kind of feel insulted that they called it the Southern strategy. Obviously, I know why they were bringing the Dixiecrats into the fold. And I sometimes wonder since then, who became what? Who became whom? Did the Dixiecrats really become Republicans, or is it the other way? Especially now that we’re here, in the last several years, it’s sounding a lot more like the Dixiecrats 50 years ago than Republicans. I think they very greatly underestimated the power of the dark side.

FP: What statement did you want to make with an album title like American Band?

PH: We hear people say, “They speak for us.” And often, people are saying really stupid things. I just shudder to think what this election is looking like to people in Europe. It’s been a couple of years, but during the Bush years, we’d go tour Europe. You know, we would hear all sorts of people who were just assuming that, as Americans, we were all somehow in support of what Bush was doing during the occupation of Iraq and various other ridiculous things that were happening. And so it was a “we have a voice, too” sort of statement.

Also, this record is about America right now, at this moment in time. I’ve always said that we want our records to be more timeless than timely. You can listen to an ’80s record and it feels like a product of its time. I always wanted our records to avoid that. In this case, we wanted this to be a reflection of a moment in time. When I wrote some of these songs, like “What It Means,” I really wanted there to be no reason to put them on there. Now, it may be more timely than when I wrote it two years ago. And I’m not happy about that. I’d just as soon the flag not be at half-mast all of the damn time. But, in the last year, while we were making this record, it seemed like every time I saw a flag it was at half-mast.

FP: Is touring during an election cycle a different experience?

MC: The only specific time I remember was 2008. I remember we were out with The Hold Steady when Barack Obama was elected the first time. I didn’t really notice anything different about the touring itself there. I remember that being a significant moment where I was. This fall might be different. Things have really changed [laughs].

American Band is out Sept. 30 via ATO Records.