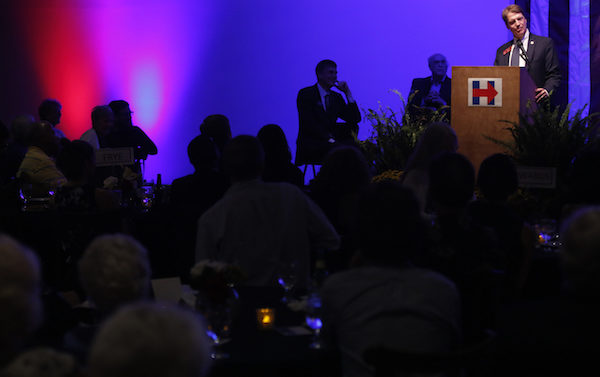 Jim Barksdale, the Democratic nominee for U.S. Senate, attacked Republican incumbent Johnny Isakson as an obstructionist and Trump supporter during a speech prior to a debate-watching party Monday night sponsored by Clarke County Democrats that drew about 200 politicos—including a few big names from Atlanta.

Isakson, who is seeking a third term, has spent the past eight years obstructing President Obama for political gain, Barksdale said.

“This is not acceptable,” he said. “We need to say that’s not the way a representative of the people should act.”

Instead of standing up to the controversial Republican presidential nominee, Barksdale said Isakson has opted to “ride on Donald Trump’s bandwagon of exclusion, his bandwagon of hate, as long as it gets him re-elected.”

Although Trump is within reach for Clinton in Georgia, polls give Isakson a double-digit lead over Barksdale, a relatively unknown businessman who’s never run for office before and recently went through a staff shakeup. Isakson won his previous two Senate races by similar margins.

But Isakson is “not the Johnny Isakson of 20 years ago,” a moderate Republican, said Jason Carter, the Democratic nominee for governor in 2014. For the past eight years, he’s “voted for every terrible thing the Republicans have done,” and now he’s staked his reputation on Trump, Carter said.

Isakson has endorsed Trump, but has also tried to distance himself. Carter accused him of trying to have it both ways.

“I listened to Sen. Sanders when he said we have to get behind Hillary,” Clarkston Mayor Ted Terry said. “The choice couldn’t be clearer, and he’s put that out there many times.”

Nationally, the conventional wisdom is that Democrats can keep the White House and retake control of the Senate without Georgia, said former congressman John Barrow. But he argued that electing Barksdale and putting Georgia’s 16 electoral votes in Clinton’s column would jump-start the party headed into 2018. In two years, Georgia voters will elect a new governor who will help draw new congressional and legislative districts that will in large part determine which party controls the state for the following decade.

The state party is in a better position to win this year than in 2008, Democratic Party of Georgia Chairman Dubose Porter said, with an infrastructure of 12 offices and 40 staffers statewide, coordinated by an operative from the swing state of Ohio.

The key will be turnout, said House Minority Leader Stacey Abrams, the top-ranking elected Democrat in the state.

“Georgia is already a blue state,” Abrams said. “We have enough people to win elections,” but 700,000 of them don’t vote.

Secretary of State Brian Kemp’s recent agreement to add thousands of names back onto voter rolls was a victory for Democrats, Abrams said.

“If we show up, and we show out, we can show the world that Georgia is blue,” she said.

Of course, Trump came under fire, too. Athens Mayor Nancy Denson said she was “offended” by rumors regarding Clinton’s health and challenged any man to spend hours standing in heels.

“I can’t tell you how many strange men come into my business and try to tell me how to run it better,” she said.

Hong, the daughter of Korean immigrants, took issue with Trump’s immigration stance, too. “I wonder where I’d be today if my family had encountered that close-mindedness,” she said.

Porter reminded the audience that Clinton helped bring the children’s insurance program PeachCare to Georgia, and that she’s fought for clean air and water, pay equality and a higher minimum wage.

“You can’t say, nobody in the world can say America is not a great country,” Lett said. “You can’t make America great again. America is great.”