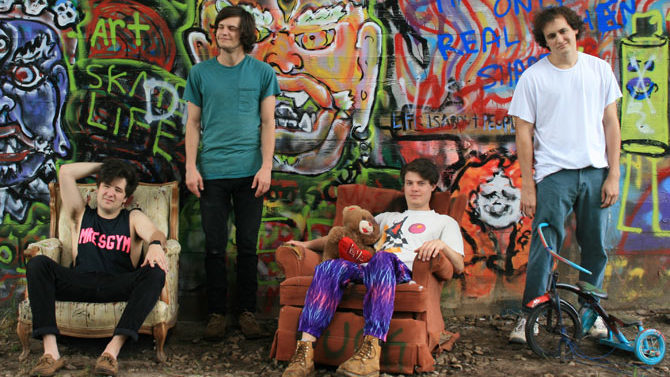 There are plenty of must-see out-of-towners on the 2016 schedule (Black Lips, The Coathangers, The Dexateens and Arrested Development, to name a few), but AthFest has always been first and foremost a celebration of Athens music. And guess what? There’s a whole lot to celebrate this year. Whether you’re a visitor popping in for the weekend or a local in need of a refresher, here are 10 local acts you’d do well to check out during the festival’s two-night Club Crawl. Check out the full AthFest schedule on Flagpole‘s online Calendar.

This female-fronted garage-punk band embraces rage, revolt and revolution in quick, two-minute songs about fighting one’s enemies and being alone on dark nights. After releasing an EP in 2015 titled Parkour, Nihilist Cheerleader continued to play constantly around town until the release of its second EP, Truth or Dare, in January. The group’s charismatic stage presence makes for a great live show; try to resist the urge to yell every chorus at the top of your lungs. [Maria Lewczyk]

With a murderers’-row lineup that includes members of The Glands, Kenosha Kid and Moths, brand new local four-piece Haunted Shed is fronted by the virtuosic, versatile guitarist and songwriter Etienne de Rocher, who also handles keyboards and the occasional bit of harmonica. The group compiles each member’s influences into a whip-smart rock and roll stew that owes equally to contemporary jazz and ’90s indie. [Gabe Vodicka]

Since forming way back in 2012, local foursome Wieuca has evolved from a messy, Pavement-aping slack-rock outfit to one of the coolest and most cohesive bands in town. Blending catchy vocal melodies with half-drunk guitar interplay and razor-sharp rhythms à la Parquet Courts, the group also flirts with anthemic Southern rock and jammy psychedelia. There’s also a healthy dose of irony to keep things fun. New single “Canadian Tuxedo,” from an upcoming full-length, showcases the group’s steady new sound. [GV]

Though it started as a solo project, this twee-pop group now has three members and a fuller sound. While earlier tracks from Justice were minimalist with simple guitar riffs and straightforward vocals, the addition of drums and bass has solidified the band as one of Athens’ must-see acts. The current version of Jianna Justice has released two singles, “Plant Growth” and “Twenty.” They’re whimsical, airy and composed without taking themselves too seriously. If you dig soft female vocalists with lyrics about slushies and early adulthood, Jianna Justice is the candy for that sweet tooth. [ML]

Since making baby steps into the scene a few years ago, The Hernies have undergone a couple of lineup changes and a significant change in sound. Initially, the group’s music straddled the DMZ between shambolic psychedelia and personal storytelling. About a year ago, everything seemed to tighten up overnight, and now the band easily claims “most improved” status. The Hernies are among Athens’ most effective progenitors of guitar-centric indie rock, featuring tightly focused songwriting, entertaining performances and eminently hummable tuneage. [Gordon Lamb]

So many bands populate their hype sheets by saying they “came out of nowhere” and “took [such and such town] by storm.” It’s usually all lies, but Art Contest actually did both of these things. Between this time last year and now, this duo helped usher a solid portion of the local scene back to its early ’80s roots with a sound that said “dance, don’t think”—even if this was unintentional. Art Contest specializes in tightly wound compositions that pivot on unanticipated changes, asymmetrical structures and driving beats. [GL]

Featuring swooning vocals over simple guitar accompaniments, indie-folk ensemble Neighbor Lady is hauntingly beautiful. With a new song called “Consider Me Mean” on the MOEKE Records Summer Singles compilation album, Neighbor Lady is continuing to introduce its sound to the world. The band was also featured on a Backlight Productions music session, which travels to artists’ homes to catch a glimpse of their creative process. Neighbor Lady’s momentum has much to do with the honest, confessional connection the band makes with its audience. [ML]

As a member of the burgeoning Space Dungeon Collective, Athens MC Lingua Franca has helped usher in an exciting new era in local hip hop. She and her cohorts’ retro-leaning style is antithetical to the sharp, futuristic trap sounds coming out of our state’s capital, but it’s no less essential. The recent Hot Corner Hip Hop series at The World Famous has helped bridge the gap between townies and rap heads, and Lingua Franca has been at the center of it all. Her set Saturday is part of the third annual AthFest hip hop showcase at Ciné; camp out awhile and get caught up on a booming local scene. [GV]

One of the most compelling live bands in Athens, Wanda earns that distinction on the strength of bandleader Avery Draut’s graceful vocals and her backing group’s clean, clever playing style. Wanda’s music is beachy but bold, ethereal but somehow earthy. There’s not much going on that’s complicated, but it’s totally captivating nonetheless. A long-awaited debut album is in the works; here’s a chance to grab a sneak peek at what the band has in store. [GV]