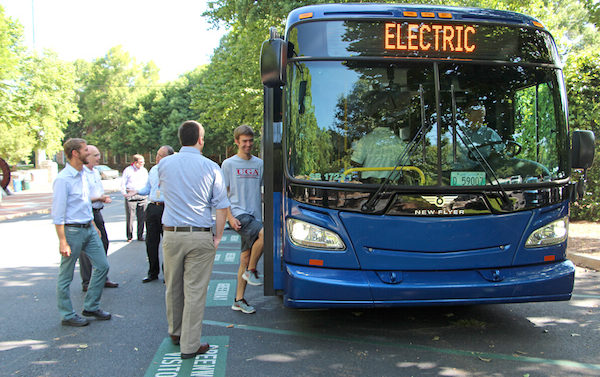 Deal announced the 11 winners of a combined $75 million in grants under the GO! Transit Capital Program.

Athens-Clarke County will use its $6 million grant to replace 10 aging diesel buses with electric hybrids. ACC chose the hybrid option over all-electric because they are less expensive, have greater range and do not require charging equipment.

UGA—which runs the second-busiest transit system in the state behind MARTA, with 11 million annual riders—received $10 million and will provide $5 million in matching funds to replace the oldest 19 of its 59 diesel buses.

The electric buses will save 171,000 gallons of fuel, they are easier to maintain, and drivers and riders gave them positive ratings during demonstrations, according to UGA. The university said it expects the new electric buses to reduce fuel and maintenance costs by 84 percent.

“We are excited about bringing this cutting-edge and sustainable electric bus technology to the University of Georgia and the Athens-Clarke County community,” Don Walter, director of transportation and parking services at UGA, said in a news release. “These buses will enhance research opportunities, greatly reduce emissions and will slow the growth of transportation costs. Most importantly, the new buses will improve the quality of transportation for students, faculty and staff. Because they’re quiet and smooth riding, they tend to increase ridership as they’re such a joy to ride.”

Additional benefits include opportunities to research charging technologies and gather data on charging and usage. The buses’ batteries can also be used to power buildings during emergencies.

While it’s a relatively small sum in the grand scheme things, the $75 million in funding represents a watershed moment in Georgia transportation policy. Other than then the little-known Georgia Regional Transit Authority’s Xpress buses in metro Atlanta, Georgia is one of the few states that doesn’t regularly fund mass transit.

But political antipathy toward transit is starting to shift. The legislature recently allowed Atlanta and DeKalb and Fulton counties to move forward on a half-penny sales tax to expand MARTA, and other communities (including Athens) can vote next year on a 1 percent local sales tax for transportation projects, including rail and buses.

“Today marks the first time that Georgia has made this type of significant investment for transit systems statewide,” Deal said in a news release. “These 11 projects represent major milestones in transportation infrastructure and demonstrate our commitment to improving mobility in every corner of the state. Once completed, these projects will address traffic congestion and support economic development through increased access to jobs.”