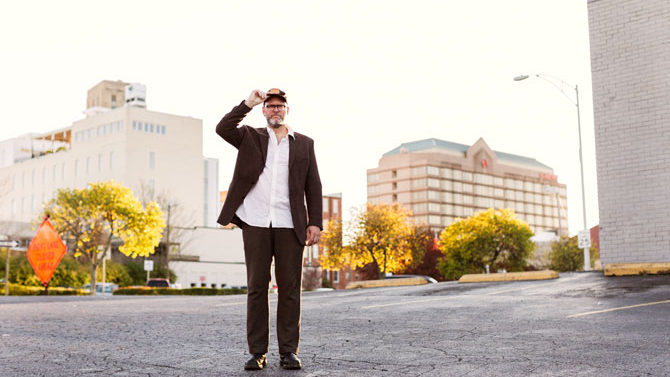 He formed one of the most influential groups in the indie rock canon, Archers of Loaf, and spent the last 15 years recording as Crooked Fingers. Last month, Eric Bachmann released a new full-length under his birth name via Merge. The self-titled collection tackles topics both universal and particular in scope. Flagpole chatted with the Athens-based Bachmann to discuss the end of Crooked Fingers, his move to the Classic City, the best conditions for recording and what he has on the horizon.

Flagpole: What does it mean to end one project and move into another under your own name?

Eric Bachmann: It’s time to change things a bit. When you do this a long time, every 10 years or so you feel compelled to reinvent what you’re doing. If you don’t do it, you become a caricature of what it is that you’re doing. On a more shallow level, it’s just fun to change names. There’s a little bit of a lie in it, because it’s the same idea. But you’re also writing from different perspectives.

For me, Archers of Loaf was this smartass perspective… I didn’t realize it at the time. You don’t really grow out of that, but [I wanted] to do something different with a storytelling element to it—more sincere and telling stories about people… I felt—and, again, this isn’t intentional, this is looking back in hindsight—I would think, “Maybe I want to change it up. I don’t know if I want to be the guy in the corner observing [people] and quietly judging them and writing funny little stories about them. I think want to be more introspective.”

You want to change perspectives, and you don’t really know what you’re going to change oftentimes, but you know that it’s time. And there’s always resistance. People are always going to say, “Oh, that’s bad business. That’s stupid and pretentious. It should just be what it is!” And that’s all true. But at a certain point, you just feel overwhelmed and want to change it up. If I don’t feel like I am being true to myself, it’s time to do something different.

FP: You’ve mentioned that some songs on your new collection may be risky for you if your family hears them. Are these solo songs less fictional?

EB: There’s no doubt that’s true, and I think that’s what I’m trying to say. I don’t think you can hide behind a moniker. If I say my family says batshit crazy things and it’s a band thing, people can say, “Oh, that’s not really Eric Bachmann.” But when it’s you, it’s really you. We’ll see how that goes [laughs].

FP: The idea that you’re responsible for your own songs really kicks in at that point, doesn’t it?

EB: That’s correct. When you’re writing, you might have that feeling, “Oh, I don’t want to say that.” You have to be conscious of what you say. For me, now, I want to do my record that way. I want to take that risk. Again, it’s not intentional, but that’s what happens. Maybe it is intentional, though, because I do remember thinking, “Screw it. I’m going to do this.”That’s why you put yourself on the artwork. Sometimes you put your face on the cover. I don’t want my face on the cover. I don’t want to do that, but it’s an attempt to be direct, to show all of the warts

FP: You recorded the solo record in Asheville, and you have a long history with North Carolina. How important is the notion of place to you when you make a record?

EB: In terms of the process, everything matters. I think I picked Asheville because I’m friends with the folks at Echo Mountain Recording… For this particular record, I knew I had to track piano and drums properly, and that was the best facility that I knew of for the price. It was within 300 miles. My father lives in Asheville, and the guys from Archers of Loaf live there. I have a lot of lifelong friends there, so it’s a very comfortable place for me to go. There’s just a sense of family and friendship there. What do Christians say? There’s a fellowship in Asheville.

So those are reasons to go there, and the city is great. I don’t necessarily go to a place that is comfortable, though. I usually go to a place that I know pretty well and [won’t] be bothered or go to a place where I don’t know anybody. I didn’t go to Asheville and stay with any of those people. I went and stayed in a separate house and there was no one there, really. When we were finished, we all went out and I saw everybody.

FP: You moved to Athens several years ago without much fanfare. What brought you to town

EB: I moved here because I met somebody, and we started dating, and we ended up staying here. She had been here for a long time. We were going to move, but she wound up going to school, so we stayed. I haven’t played here much, either. A lot of that is just economics. I can play here to 17 people, or I can play in Atlanta and those 17 people will come and it’ll be 150 [other] people. It’s not very rewarding to play a place where there’s only a few people coming out. So, a lot of it’s that.

I think the reason why there wasn’t a lot of knowledge of me moving here is that, quite straightforwardly, no one cares. I’m not bummed about that, but people don’t care, and I don’t really draw attention to myself. I think I’ve played here three times—once at the Caledonia, once at the Georgia Theatre and once at the 40 Watt, opening for Superchunk. I just haven’t played here a whole bunch, but that might change with the new record. When I moved here, I joined Neko Case’s band in 2011. So that’s been taking up a lot of my time. Now that I’m doing my new record, I’ll probably be a bit more out and about.

FP: You’ve worked with Merge for years, and you opened for Superchunk the last time they were in town. Could you talk about that history?

EB: I met those guys in 1991. I was a saxophone major at Appalachian State. I wanted to write, but I wasn’t sure if I wanted to write music or stories. I was 20 years old. I started a bunch of crappy bands. I started some good bands. They were starting up around then, and I met them. We had a similar sense of aesthetics.

I would argue that the biggest mistake I made in my life or career—and I certainly wasn’t thinking of it as a career at the time—is when the Archers signed to Alias. Nothing to discount them—I really appreciate the money they spent on marketing us. But at the same time, I didn’t know Mac [McCaughan] and Laura [Ballance] very well at the time. Merge was just getting started. I just assumed that they didn’t want to put out our record. They weren’t making offers, so we just went with where we went.

A year later, we had toured with them a whole bunch, and they were putting out records by the Magnetic Fields and, of course, Superchunk. If we had just waited a year and a half to put out our record—of course, that could have been too late in terms of timing or whatever. We did the re-issues on Merge, but I wish we had done it initially, because it was more aesthetically appropriate to be on that label.

FP: What’s the next step? Is a new project possible, or is the solo record the only thing in your purview right now?

EB: I am going to go on tour. I am leaving to go with Neko Case. I have most of 2016 with her and then I am going to tour on my solo record. I’m already writing new songs. I have a record that I just finished with Jon Rauhouse, Neko Case’s pedal steel player. We’re not going to put that out for a while, because he just made a record, too. That’ll happen maybe in the fall. We’ve considered, but we just don’t know.