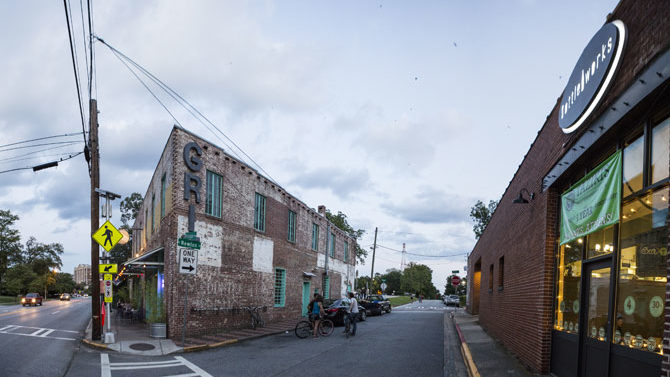 Since the Athens-Clarke County Transportation and Public Works Department, at the Bottleworks owners’ urging, reversed a one-way block of Newton Street from northbound to southbound in 2013, the number of crashes there has risen by 40 percent.

It’s still a small number—only three per year, on average, according to TPW Director David Clark. Most of those crashes involve people waiting to turn left from Prince Avenue onto Newton and getting rear-ended, he said.

TPW is floating a plan to close the block of Newton between Taziki’s and The Grit to create an outdoor cafe (along with three on-street parking spaces and enough room for emergency vehicles). The idea came from UGA professor Jack Crowley’s downtown master plan.

At a public forum Monday that about 30 people attended, Clark said only 300–400 vehicles per day use that block. That traffic would be redirected to Meigs Street or Finley Street, he said. In the case of trucks that may have a hard time negotiating the sharply angled Meigs Street turn, signage would direct them to Finley, he said.

Chase Street may also see changes. While the street is too narrow at 26 feet to add bike lanes between Prince and Boulevard, Clark is proposing a new crosswalk with flashing beacons and a pedestrian refuge in front of Chase Street Elementary. The refuge would be angled to force those crossing to turn their bodies to observe oncoming traffic. It may also need a crossing guard stationed there, Clark said.

Between Boulevard and Rowe Road (just before the Loop), Clark is proposing replacing the center turn lane with two bike lanes. This could create delays for vehicles turning left and ambulances leaving the Loop, as well as lead to an increase in crashes, he said.

Between Rowe Road and Newton Bridge Road, where Chase is 40 feet wide, Clark’s proposal is to convert the corridor from four lanes to two lanes with a center turn lane and bike lanes. At about 12,000 vehicles per day, traffic is well below the threshold for a three-lane road to function.

TPW is accepting public comments through Friday. Maps , a comment form and other documents can be found here.

Clark said he will make a recommendation prior to the ACC Commission’s Apr. 19 meeting, and they are scheduled to vote May 3.

If approved, the Newton block would be closed this summer, and work on Chase would happen this fall, in conjunction with a scheduled repaving.