On Drownin On a Mountaintop, T. Hardy Morris Gets Tough and Twangy 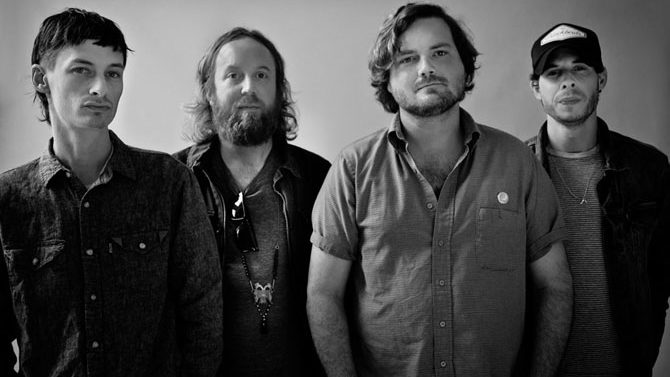 Sitting still isn’t in the cards for T. Hardy Morris. Currently, the Dead Confederate frontman, who is enjoying a second musical life as an acclaimed solo artist, is gearing up for winter dates with former Black Lips member Ian Saint Pé, as well as similarly buzzworthy groups Justin and The Cosmics, Roadkill Ghost Choir and Shakey Graves.

In addition to touring, during stretches when Dead Confederate isn’t playing, Morris stays busy, writing and demoing songs for future solo records. He says he’s gotten used to working outside of the confines of one particular project. “I see myself now as a recording artist more than a band leader,” Morris says from his home in Athens.

Morris’ No. 1 priority at the moment is supporting his latest solo effort, Drownin on a Mountaintop, released this summer on Los Angeles’ Dangerbird Records. The record was helmed by Adam Landry and Justin Collins, the same production team that worked with Morris and his colleagues in the indie supergroup Diamond Rugs, which also features Saint Pé, Deer Tick’s John McCauley and Robbie Crowell, Los Lobos’ Steve Berlin and Brian Dufresne of Six Finger Satellite.

Recorded in Nashville at Landry’s backyard studio, Playground Sound, as well as Chase Park Transduction in Athens, the 11 tracks that comprise Morris’ newest LP are louder and more raucous than those on his previous solo offering, 2013’s Audition Tapes, which was a sparser, spookier effort. In contrast, Drownin showcases riff-heavy twang with plenty of crunchy country guitars. “I had done a couple of songs in the past that dipped my toe in the country-ier side of things, but [I] went a bit more angular and rowdier,” he says of his latest record’s direction.

Tracked quickly to tape and credited to T. Hardy Morris and The Hardknocks, the album features several Athens scene veterans who have known and worked with Morris for years, including Matt “Pistol” Stoessel on pedal steel, Vaughan Lamb on bass and Nick Sterchi on drums. Morris says everyone was in lockstep during the sessions. “You just get in the right room with the right people, and you’re speaking the same language,” he says. “We were looking for the same end result.”

Though Drownin may be a slight aesthetic turn, the response has been encouraging. “I wrote some songs… and they didn’t seem all that strange to me,” he says. “But then I noticed the reaction that it got from other people.” The right sorts of listeners have been taking notice: The album has garnered buzz from national outlets like Consequence of Sound and American Songwriter.

If its production choices make Drownin feel like a unit unto itself, that’s because Morris intentionally steered the songs around similar sounds and a common thread. “I’m in the old model. I’ve always liked albums,” he says. “I don’t think I’ve made but a couple of mixtapes in my life. I guess I wanted to write an album and keep that in mind.”

Although Morris emphasizes that the discussion over the integrity of the album as an art form is a “whole ‘nother rabbit hole,” he says a long-player is simply “the right-sized canvas” for releasing his music.

Still, while he embraces the full-length, his approach to songwriting is decidedly less rigorous. “I just kind of tinker around and if something catches my ear, I go after it,” says Morris. Even with so many outlets available to him, Morris says he doesn’t start off writing for one project or another, adding, “[A song] reveals itself as to what box it should wind up in.”

While Dead Confederate is not as active as in years past, Morris says the band that initially brought him to Athens is still in his field of vision. “It’s more of a springboard than an institution-type band,” Morris says of the grunge-focused group. “And that’s fine—that’s just the nature of what artistic projects do.”

Still, he says new material from the band may very well be on the horizon. “We keep threatening to record a new album, but it’s just a matter of finding the right time frame to do it in,” Morris says. “I like to wear a bunch of different hats, and Dead Confederate is just one of those.”

Having toured with big-name acts from Deer Tick to Drive-By Truckers, Morris says his success, in part, has been built on agreeing to play with whomever will extend an invite. And while there’s nothing solidly planned for 2016, Morris is confident that his schedule will fill up just like it always does.