The Revivalists Bring Big Easy Charm to the Classic City 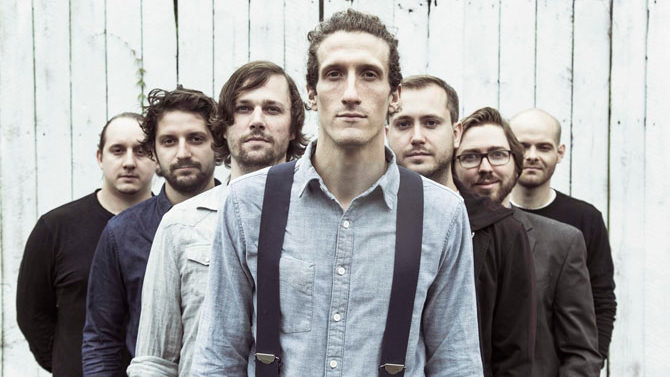 Since the devastation wrought by Hurricane Katrina in 2005, New Orleans has bounced back as an epicenter of Southern culture, with the city’s current music scene gaining considerable national attention. At the top of the crop are The Revivalists, who have garnered substantial steam since their inception in 2007.

Key to their success, The Revivalists aren’t caught up in a commitment to any particular sound. “To us, it’s a Revivalists song if it’s a song that we all believe in. If we love a song, then we’ll play it,” says Rob Ingraham, the group’s saxophonist.

Although the band began as a standard rock four-piece featuring drums, guitar, bass and vocals, the group has expanded to include seven members and now features pedal steel, sax, keys and trumpet—instrumentation that, at least on the surface, is more aligned with the Big Easy.

Ingraham jokes that he and the band’s pedal steel player, Ed Williams, are in the “weird instrument corner” of the band, saying, “We definitely have a pretty wacky instrumentation, but instead of letting that corral us down certain avenues, we use it to give us the freedom to go anywhere we want and do what we feel is best for each of our songs.”

One lesson Ingraham says the band has learned from its hometown is to not be competitive with its creative output and to support others in the community.

“The thing I’ve always said… is that New Orleans doesn’t have a music ‘scene’; it has a community. It’s not a bunch of standoffish hipsters trying to out-cool each other. There’s no ladder to climb. You don’t need to watch your back,” he says.

The Revivalists are on tour in support of their fourth release, July’s Men Amongst Mountains, a record that Ingraham admits is “aesthetically different” from the band’s previous work. That difference, in part, is due to avoiding “studio wizardry” and tracking the large group’s sound in its raw form. Though the process was arduous, it captured the “old-school performance feel” of the band’s live show, says Ingraham.

“Having to listen and immerse ourselves like that made for some really great moments that we simply wouldn’t have captured if we had tracked everything with more isolation,” says Ingraham. “I think that we grew a lot as a band just by committing to that process.”

On Men Amongst Mountains, the band’s growth since its previous record, City of Sound, is obvious. Ingraham says the group is simply exercising its creative freedom.

“I don’t think the goal at the outset was to morph into the seven-headed behemoth you see today. It just kind of happened,” he says. “It goes hand in hand with our creative philosophy, where it was less about, ‘We have to be this or that,’ and more about getting out of our own way and embracing whatever feels natural.”

If tracking a band of this size live seems daunting, touring is an equal challenge for The Revivalists. Still, Ingraham says that while it can be a logistical nightmare, the group finds a way to make it work.

“There are little squabbles here and there, but at the end of the day, we’re all jammed up in each other’s space no matter what happens, so there’s really no choice but to love each other,” he says.

The band continues to gain fans through its “participatory” live show, which features a great deal of audience interaction. Ingraham says that regardless of where the tour stops, folks are willing to listen carefully and allow themselves to be moved by the music.

“There’s a lot of call-and-response and a sense of give and take with the audience,” he says. “That’s something we’ll do whether we’re in New Orleans, Seattle, Dallas or Albany, and, fortunately for us, people tend to respond to it wherever we go. Good people are good people, and we’ve been blessed with a lot of good people all over the country who like to come watch us do our thing.”