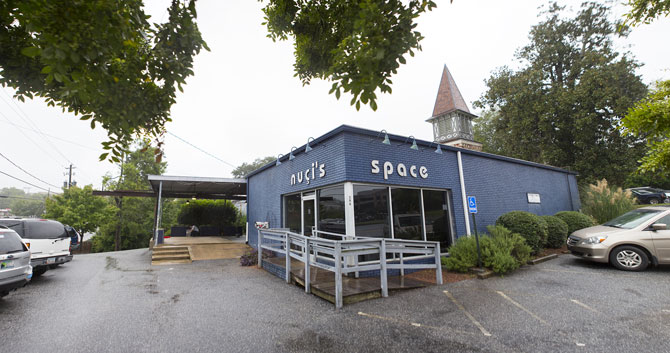 The Athens music community is used to rallying around its bands, venues and festivals. Nuçi’s Space, a less visible but no less important fixture on the local scene, will get the chance to celebrate its longstanding influence with a 15th anniversary open house party on Friday, Oct. 9 at the nonprofit’s Oconee Street headquarters.

In addition to a silent auction featuring refreshments, the event will include live music by 2015 Athens Business Rocks grand finale champions Mother Tucker and the Knockouts, as well as a ceremony honoring the organization’s volunteers and donors.

Founded by Linda Phillips after the suicide of her son, Athens musician Nuçi Phillips, the organization provides subsidized mental and physical health care services to local musicians. Executive Director Bob Sleppy says the nonprofit “has provided access to mental health care to over 2,000 musicians and subsidized over 25,000 therapy appointments at a cost of over $1 million” since its inception. Given Athens’ relatively small size and that its music community is especially vibrant, Sleppy is quick to emphasize that these are “significant” numbers.

Along the way, many high-profile locals have stepped up to help. Sleppy cites Patterson Hood of Drive-By Truckers and his wife, Rebecca Hood; R.E.M. advisor Bertis Downs; and Ellie MacKnight from Widespread Panic’s management team as “just a few examples of the people who have helped [the] organization thrive” over its decade and a half of existence.

“We’ve been fortunate to have built friendships with these bands and their employees, many who have served as board members or volunteered during various events over the years,” says Sleppy.

One perennial Nuçi’s Space-sponsored event that has gained considerable attention since its inception is Camp Amped, a summer camp devoted to teaching young Athenians music and performance skills with an emphasis on physical and mental well-being at its core. Now in its ninth year, the program, which features established Athens musicians as counselors, has become key to supporting Athens’ creative youth and identifying emerging talent in the local scene.

More recently, Nuçi’s Space widened its focus by becoming involved in the preservation of one of Athens music’s historical landmarks: the St. Mary’s steeple next door, the location of one of R.E.M.’s first shows. Although the organization “does not have any plans or a desire to play a significant role in preserving other landmarks in the future,” Sleppy says the opportunity to preserve the landmark was a project worth its time and effort.

Thanks to donations from people in Athens and outside the community, Nuçi’s Space has become the steeple’s “long-term steward,” says Sleppy, adding that the project was about more than preservation; it also gave the center “the opportunity to reach a large audience of new donors, raise funds for our core programs and services and strengthen the long-term stability of the organization.”

While Nuçi’s Space celebrates another milestone, Volunteer Coordinator Dave Chamberlin underscores the need for continued community involvement. He stresses that in addition to occasional, event-based opportunities, where people can devote their time for an afternoon or weekend, anyone interested in volunteering regularly should contact Nuçi’s Space about how they can help. Chamberlin also says those with specialized skills, such as instrument repair or IT support, can lend their time and knowledge to the organization, too.

Although Nuçi’s Space has had a busy first 15 years, it shows no sign of slowing down. Sleepy says fulfilling its core mission to provide mental and physical health screenings for musicians will remain a priority in the years to come. Taking stock of what the nonprofit has been able to accomplish thus far, Sleppy puts it bluntly. “The past 15 years have been amazing.”