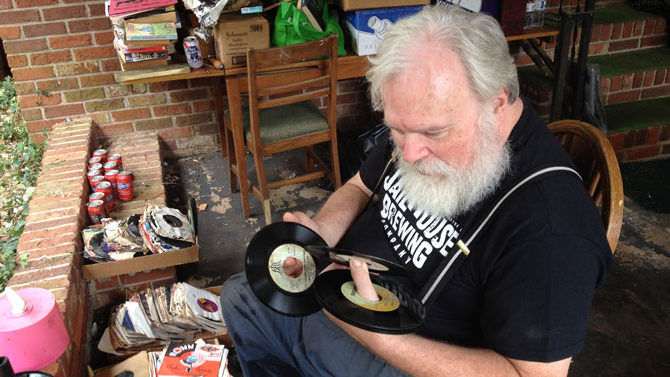 Well-known local writer, DJ, record collector and beer connoisseur William Orten “Ort” Carlton will go to trial Monday in Athens-Clarke County Municipal Court on charges of having a bunch of crap in his yard.

Ort will face a probation-revocation hearing stemming from citations he received for violating local quality-of-life ordinances last October. He spent a night in jail last month after Judge Leslie Spornberger Jones ruled that he hadn’t done enough to clean up his property in the ensuing months, in spite of several extensions.

“Our main goal is compliance,” County Attorney Bill Berryman said after a brief hearing this afternoon to set a trial date. “We don’t want to punish them [people who are cited by the Community Protection Division]. We want them to fix it.”

Before and since his brief incarceration, friends have been helping the 66-year-old—who suffers from a heart condition and a bad back—clean up his Homewood Hills property, removing dilapidated sheds, a junked car and piles of other stuff that had accumulated in the back yard and carport.

“We’re certainly mindful of each individual’s resources and means,” said assistant county attorney Carrol Perrin (no relation to the Perrins who live on Ort’s street).

Spornberger will have to decide if he’s made enough progress to avoid going back to jail for violating probation again.

At the same time, Ort will be arraigned on a separate set of citations he received Sept. 10. He’s being represented by Bill Overend in both cases.

Perrin said the defense hasn’t reached out about a plea bargain, but they’re willing to listen.

Drunken Mayhem on the Georgia-Alabama Weekend