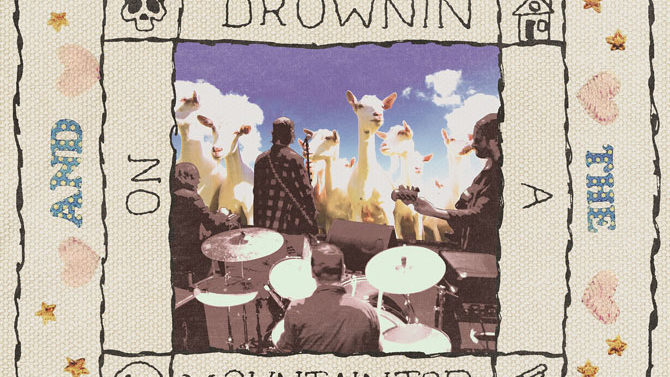 Ain’t it crazy? We’re already at the halfway point of 2015. But rather than dwell on the crushing weight of time, we choose to celebrate its many musical fruits. The year’s first six months have given us an abundance of sweet, juicy local recordings. Below, we revisit some of the sounds that have kept us sated.

Deep State has made a name for itself with melodically savvy punk songwriting and a high-energy live show. The group’s debut full-length, Nice, takes the bite and blister of 2014’s Bein’ Mean EP and hardens it; the guitars are more pointed, and singer Taylor Chmura’s disdain for stasis is sharper than before. His distinct voice—that of the fed-up 20-something—is heard more loudly and clearly across a full album, where he and his talented bandmates have the time and space and confidence to profess their frustrations. [Andy Barton]

Dictator: Shoulda Had a Verse

With Shoulda Had a Verse, Dictator officially claims the title of king of Classic City hip hop while (not so) gently suggesting that the rap capital to our west won’t be the only hotspot in the state for long. As its title suggests, Dictator’s first mixtape of 2015 is an outright challenge to those who would doubt the eventuality of Athens hip hop. [Gabe Vodicka]

Una Tuesday may skip along with sloppy strings and stuttery drums, but don’t write it off as twee. El Hollín speaks for the neglected misfits of Athens, the downtrodden who hide in their musty homes and find bliss in a cat’s fur. An off-kilter mix of accordion–laced ballads and frantic sing-alongs, Una Tuesday has a ramshackle charm that encourages everyone and anyone to follow in its wake. [Lee Adcock]

A little fuzz can go a long way. In 2014, Fake Flowers released Opaque Pop, a decent if unmemorable jangle-pop EP. Almost a year later, Wonder Wave flipped the script, pushing Fake Flowers into shoegaze and dream-pop territory. Though the basic pop song structure is the same, the extra layers of noise and vocal distortion add a unique sense of character. With this hard left turn into a new sound, Fake Flowers has realized the potential that the band’s first EP only hinted at. [Nathan Kerce]

Futo: I Wish I Had Been Born as the Rain that Forms Rivers that Carve Out Canyons

Patrick Brick’s lo-fi recordings provide an insightful look into the songwriter’s brain and bedroom. The songs on his latest release as Futo are no exception. On his second full-length, Brick grapples with more somber subject matter, oscillating between electronic and acoustic instrumentation. I Wish I Had Been Born… finds Brick’s chillwave influences intersecting more than ever with his more confessional singer-songwriter leanings. [AB]

The Goons: No Art

When a band’s got it together, it’s a glorious thing. For No Art, The Goons penned some of the catchiest pop tunes of the year so far, from the Television-ish “Bella” to the meaty mod-rocker “Morning Glory.” Most of these songs are capable of lodging themselves in a listener’s head for days. No Art has risen to the top mostly because it’s just good, clean fun. [LA]

A January release date threatens to bury even a great record under the next 11 months of music. That hasn’t been the case for Grand Vapids’ debut, Guarantees. The 10-song collection of twangy, shoegazing alt-rock finds longtime collaborators Austin Harris and McKendrick Bearden taking fear and loss and transforming them into hazy, sprawling testaments of sound. With both straightforward standouts like “Adequate” and “Tuned,” as well as beautifully arranged pieces like “No Memory” and the album’s title track, Grand Vapids follows in the footsteps of Deerhunter and Dead Confederate as one of the Peach State’s most promising rock bands. [AB]

You could stop and ask yourself if you need five more scuzzy, hummable, Hüsker Dü-ish songs in your iTunes library. Or you could just turn up your speakers, smile and hum away like it’s 1995. The battered anthem “Soul of Clay” lifts the weight off your shoulders; “It’s Relative” throws it off with a smirk and a snarl. Cut the Chord makes the cut because Hunger Anthem won’t let a good man (or woman) down. [LA]

Mind Brains is new; Mind Brains is old; Mind Brains is astonishing. The group’s debut is the kind of frenzied and kinetic psych-pop dream that only Elephant 6 could provide. With members of the Olivia Tremor Control, Music Tapes and of Montreal all contributing to this big, beautiful mess, the legacy of some of Athens’ most influential bands is present on every track. The grand experimentation of “Whistle Tips” shares the stage with the catchy pop of “Body Horror,” and somehow it all feels right. [NK]

T. Hardy Morris & the Hardknocks: Drownin On a Mountaintop

Rather than follow up 2013’s Audition Tapes with another collection of stark, subdued folk, Dead Confederate frontman T. Hardy Morris took a page from his other band and beefed up his confessional tunes with a layer of crunchy distortion. Drownin On a Mountaintop is a strange but sure-footed mash-up of grunge bombast (check out the beginning of “Likes of Me” for a rather unsubtle “Milk It” homage) and honky tonk swagger. Throughout, Morris fully embraces his ‘90s rock obsession, while Matt Stoessel’s pedal steel keeps things grounded in the barroom-Americana tradition. [GV]

The central concept of System Delight is an artificial love story in which a computer spawns two separate programs that quickly become self-aware and begin to feel complicated emotions toward one another as they discover what it’s like to be alive. Even if you’re not taken by the record’s out-there story or sexually suggestive aesthetic, System Delight is still a delightful and easygoing collection of future-bass sounds from one of Athens’ brightest up-and-coming artists. [NK]