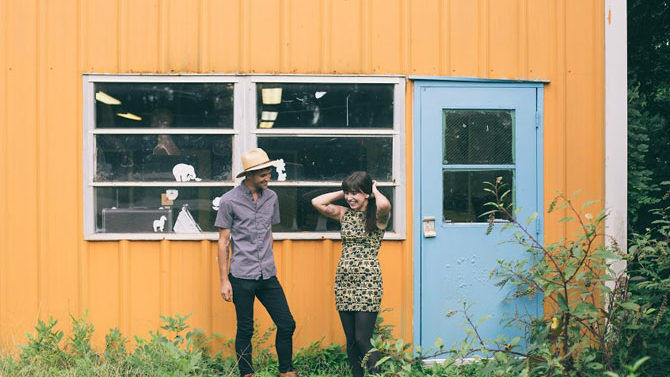 Overall, artists and musicians have little to complain about in towns like Athens. But, according to k i d s frontman Jared Collins and longtime scene vet Kimberly Drew, that doesn’t mean there isn’t room for improvement. Along with the generous contributions of others, the duo has recently taken their planned multi-use venue, Noun Factory, to the next level, turning what was initially envisioned as a DIY playground into something more fully realized.

“We want to make it a welcoming environment for other people to come in and explore what they do,” says Drew. As Collins and Drew see it, Athens doesn’t have a space conducive to “immersive performances” at the present time, performances with a non-traditional bent and a focus on mixed media. Away from the hustle and bustle of downtown, the former preschool at 145 Ruth Drive seemed like the perfect location to set up shop.

Those not intimately connected to the local DIY scene might be surprised to learn that this is not Noun Factory’s first rodeo. Collins and Drew hosted events in an apartment at the Chase Street warehouses before deciding to move the operation to its new location.

If a metal band wants to spit blood on the walls, we’ll paint them white and say, ‘Yes’.

Noun Factory is designed to help artists do what they do best: make art. That might mean a place to record or a space for collaboration; Noun Factory’s proprietors are open to what may come. Imposing limits on the space would be counterintuitive to its mission, they say.

To wit, Collins and Drew hope Noun Factory can accommodate events and endeavors off the traditional arts radar. Drew noted that the Athens Fencing Club plans to use the space to teach locals the esoteric sport. Others have expressed interest in hosting low-cost seminars on film history and theory, complete with screenings of canonical works.

Noun Factory will host a celebration of its impending opening at the 40 Watt Club on Aug. 29, where local bands Monsoon, Bronze Brain, Oak House and Tongues will perform. Although proceeds from the event will help Noun Factory raise money to improve the venue’s budget for sound equipment, Drew emphasizes that the new venture is not a nonprofit and should not be confused as such.

“Our goal is to be 100 percent legitimate and keep the same ethos of something like [a DIY space],” she says. Along with musician and partner Jacob Deel (Muuy Biien, Cottonmouth), the pair has filed paperwork to operate as an LLC, complete with all the permits required for a multi-use venue.

The 40 Watt concert will coincide with the release of a limited-edition cassette compilation, But What Does It Sound Like?, that will be available for purchase at the show, as well as Low Yo Yo Stuff and Noun Factory. The cassette features nine songs from local artists affiliated with Noun Factory since its inception (some of whom will be performing during the 40 Watt showcase). The songs on the compilation were recorded live in the new space by Southern Shelter’s Sloan Simpson.

Given the outpouring of support that Noun Factory has received thus far, Collins and Drew are excited to launch the venue as soon as possible. Barring any bureaucratic delays, they hope to be fully operational by mid-September and have already begun booking bands and art installations for future dates.

Whatever is in the cards, above all, Collins and Drew see potential to “fill a gap” for the music and arts communities in town.

“It’s a place [that exists] out of necessity for Athens,” adds Collins. “Most venues can’t do [what we plan to do], and it’s not because they don’t want to. It’s because they can’t accommodate it… If a metal band wants to spit blood on the walls, we’ll paint them white and say, ‘Yes’.”