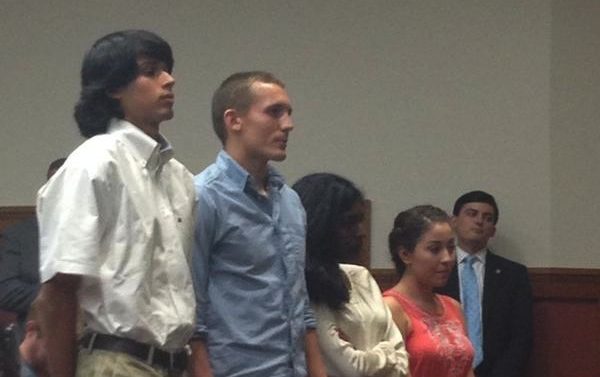 Last night, Flagpole broke news about four University of Georgia students who challenged Gov. Nathan Deal at a College Republicans meeting about the state ban on undocumented students attending UGA. We obtained video of the confrontation this morning.

The video opens with Carver Goodhue, who is white, asking Deal, “why do you deprive undocumented immigrants who’ve lived here all their lives the right to come here and attend school with us?” The last few words should have tipped Deal off that Goodhue is a UGA student and, thus, a legal U.S. resident.

“It is really something that can only be dealt with by the federal government at the congressional level, dealing with DREAM Act children, which I presume that maybe you are,” Deal replies. The DREAM Act is a bill that would allow undocumented young people who attend college a path to citizenship.

There is some back-and-forth with Goodhue and Kevin Ruiz, another member of the UGA Undocumented Student Alliance (a somewhat misleadingly named organization that includes both UGA students and undocumented young people who’d like to go to UGA but can’t).

“What I’m saying is there’s a fundamental problem that can only be solved at the congressional level, and that is to deal with children—and I presume you probably fit the description—who were brought here…” Deal trails off, but the end of the sentence is obviously something like, “to the U.S. by their parents.”

Miranda: “I don’t know why you thought I was undocumented. Is it because I look Hispanic?”

Deal: “You made the statement. You stood up, so I apologize. I apologize if I insulted you. I did not intend to.”