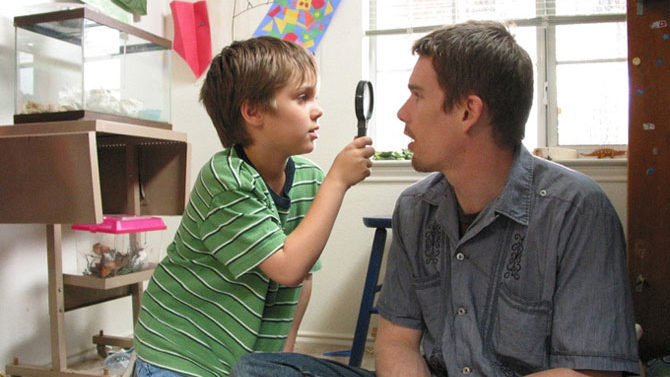 BOYHOOD (R) Boyhood is more than the once-in-a-lifetime conceptual tour de force that it certainly is. Filmmaker Richard Linklater has delivered a coming-of-age epic. Star Ellar Coltrane was seven years old when Linklater started filming Boyhood in 2002 and 19 at the end of the 12-year shoot. His performance, much like this film, is a feat that will be hard to ever replicate. The 165-minute film captures the greatest hits of growing up. Mason Jr. has an older sister, Samantha (the also wonderful Lorelai Linklater), a struggling single mother (Patricia Arquette), and an absentee dad (Ethan Hawke) who still has some growing up of his own to do. Where so many coming-of-age stories find themselves stuck in syrupy nostalgia, Boyhood resembles more of a documentary; Michael Apted’s 7 Up films are the most appropriate peers for Boyhood. Years can be denoted by the soundtrack. No central narrative frame outside of Mason’s life drives the story. He does not want to see a dead body, knock up his girlfriend, steal his parent’s car, et cetera. He simply grows up. He gets bullied. He is disappointed by his parents. He falls in love. He gets his heart broken. He graduates. The story is so familiar one might worry it would bore at nearly three hours, but the core performances—Hawke delivers a knockout—make the time fly by like the years. Linklater does allow his bent for overly philosophical dialogue drive Mason’s high school years, but by then, the audience understands that is who Mason is. The film remains forever true to Mason. The film’s perfection of concept and execution will probably haunt Linklater through at least his next feature. Topping Boyhood, especially after it garners a truckload of awards and tops many a year-end list, will be difficult. One thing is for certain; Linklater may be unpredictable and hard to pin down, but it’s a sure bet he’ll again cook up something with which to wow audiences.

WHEN THE GAME STANDS TALL (PG) Football must almost be here if an inspirational gridiron flick is being released in theaters. When the Game Stands Tall tells the (inspired) story of the De La Salle Spartans and their record 151-game-winning streak. Coach Bob Ladouceur (James Caviezel, as blandly stalwart as ever) built a winning program based on the values of Chicken Soup for the Soul. The movie dramatizes the loss of the winning streak via the death of a recently graduated star and the health problems of Coach Ladouceur. If you watched the film version of Friday Night Lights, you’ve pretty much seen When the Game Stands Tall. An abusive football dad (Clancy “The Kurgan” Brown) badgers his star running back son (Alexander Ludwig); the climactic game is against a team seemingly composed of giants. The football scenes are fun, even if the melodrama gets a bit churchy. Interestingly, the movie is only subtly religious, a move that might alienate some of the big church crowds to which this movie is being sold. Judging from the closing credits, which borrows scenes of the real Ladouceur from a duo of docs, the extraordinary real story would have been more motivating than this ordinary fictionalized version.