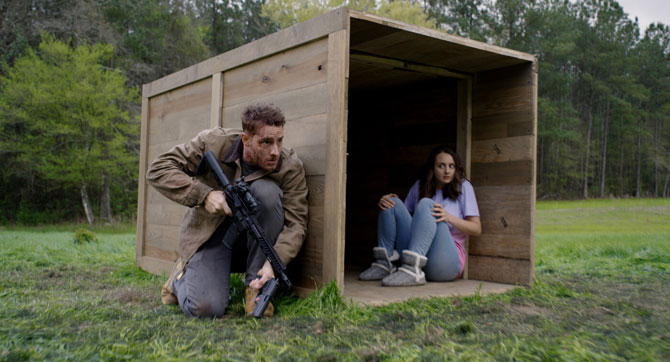 No new wide releases until Apr. 10 sounds pretty crazy, huh? That means no return to A Quiet Place Part II any time soon. The 12th Annual Athens Jewish Film Festival for Mar. 21-25 is canceled, including the opening night gala and film, Fiddler: Miracle of Miracles. CinÃ© canceled the rest of the screenings, which included The Keeper, A Bag of Marbles, Mr. & Mrs. Adelman, The Second Time Around, The Tobacconist, Echo, Holy Lands and A Fortunate Man. Age of Assassins, presented by Pachinko Pop Cinema at Flicker, is canceled for Mar. 19. The Morton has canceled the Banff Mountain Film Festival on Mar. 18 and the Ripple Effect Blue Carpet Premiere on Mar. 22.  So, are Emma, The Hunt or Bloodshot worth breaking quarantine? (Briefly, the answers are probably, maybe and definitely not.)

EMMA (PG) Emma, the most popular Jane Austen novelâ€”no one ever guesses when asked to name a novel by Jane Austenâ€”concerns a privileged young lady named Emma Woodhouse (Anya Taylor-Joy), who has convinced herself that she is a preternaturally gifted matchmaker. Naturally, this misconception couples with unnecessarily obfuscated communication to create narrative complications that would leave a sitcom writersâ€™ room green with envy. Taylor-Joyâ€™s sweet energy cannot eradicate the bitter traces of a mean girl that fuels Austenâ€™s matchmaker. It is Emmaâ€™s very privilege that allows her to be a matchmaker and also believe she is good at it. The film, written by Eleanor Catton and directed by Autumn de Wilde, a music video veteran making her feature debut, has the modern sensibilities of Greta Gerwigâ€™s Little Women but seems more interested in critiquing the privileged Emma than that film did the March sisters. This latest version of Austenâ€™s novel is quite playful and amiably spirited even if Emmaâ€™s suitors, the Darcy-an George Knightley (Johnny Flynn, who resembles Charlie Hunnam to a point of distraction) and probably caddish Frank Churchill (Callum Turner), might not be up to the task of winning her, or Harriet Smith (Mia Goth), for that matter.

THE HUNT (R) The Hunt is smarter than you would think it to be but never as smart as it thinks itself to be. The Blumhouse-produced satire written by Nick Cuse and Damon Lindelof grows out of the manhunt proposed in â€œThe Most Dangerous Game.â€ Here, the twist is that liberal elites are hunting some conservative deplorables, and the result comes off like restrained Eli Roth filled with familiar faces like Hilary Swank, Emma Roberts, Ike Barinholtz, Betty Gilpin, Ethan Suplee and Glenn â€œDennis Reynoldsâ€ Howerton. Gilpin, best known (to me) for Nurse Jackie, proves ready for higher profile work; she is highly believable as a tough-as-nails heroine, even if her accent is squeaky. The Hunt amusingly, violently makes some political points, while offering little insight into our divided country. Our great politi-cultural divide could use some skewering; letâ€™s hope The Hunt is more of a good start rather than the last word.

BLOODSHOT (PG-13) In 1989, former Marvel editor-in-chief Jim Shooter co-founded Valiant Comics; in 1992, the company introduced Bloodshot, a former soldier (originally he was a mob hitman) given a healing factor thanks to a billion nanites injected into this blood. A more generically 90s, heroic origin could exist, but Bloodshotâ€™s beginnings are up there. Enter Vin Diesel as former Marine Ray Garrison, who is the cinematic Bloodshot. Now you can add generic-looking to Bloodshotâ€™s list. At least the comic character had distinctively white skin (think God of Warâ€™s Kratos) and a red circle on his chest. Movie Bloodshot just looks like Vin Diesel, who, for what itâ€™s worth, does not phone in his vengeance-fueled portrayal. In this era of great comic book movies, Bloodshot comes off more like a weak, cinematic adaptation of a videogame. This snoozefest does as much to bust the comic book movie boom as Valiant, Image, and more helped burst the 90s comic book bubble. (The big boys deserve their share of the blame, too.) It certainly is a far worse start for the Valiant Cinematic Universe (really?!) than Batman v. Superman was for the DCEU.