Invisible and On Fire 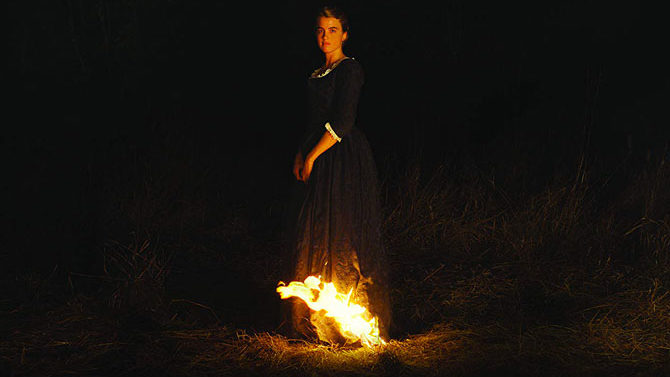 Let the spring movie onslaught begin! Disney and Pixar signal the ever-earlier beginning to the blockbuster season with their first Best Animated Feature Film competitor, Onward. Set in a world that meshes suburbia with high fantasy, Onward sets two elf brothers, voiced by the ubiquitous Tom Holland and Chris Pratt, on a mission to find magic again. Ben Affleck seeks redemption, both cinematic and hardwood, in The Way Back from his Accountant director, Gavin O’Connor. Finally, the new version of Jane Austen’s Emma., starring Anya Taylor-Joy and the feature debut of music video director Autumn de Wilde, probably goes wide this week. Maybe it will find its way to Ciné, where Portrait of a Lady on Fire (more later), The Lodge and The Assistant are showing through March 5. On March 10, the Science on Screen Film Series returns with the migratory beekeepers documentary, The Pollinators, which is accompanied by a reception featuring honey samples and cocktails. Flicker shows 80s favorite, The Lost Boys on March 4, though the real draw may be saxophonist Tim Capello, best known for his performance of “I Still Believe” featured in the film. On March 9, Flicker’s Showdown at the Equator presents 1983’s Holy Flame of the Martial World, which features the tasty combination of vengeance and martial arts. On March 9, the Oglethorpe Library hosts another Seniors’ Monday Matinee with a movie TBA. Beechwood’s Flashback Cinema offers more classic movies on the big screen; this week, North by Northwest makes it second and final appearance on March 4 before Jimmy Two Times goes to “get the papers, get the papers” in Goodfellas on March 8.

THE INVISIBLE MAN (R) After the high profile failure of The Mummy, with which Universal intended to introduce the Dark Universe, an interconnected series featuring its stable of classic monsters – Dracula, Frankenstein, Wolfman, et al –  Leigh Whannell’s version of H.G. Wells’s The Invisible Man provides an uncommonly good example of how to reboot a horror icon amid low critical and audience expectations. What Whannell, the writer who started Saw, for better or worse, makes invisible is the semi-tragic nature of Wells’ Griffin. In the new film, Adrian Griffin (Oliver Jackson-Cohen when he is occasionally visible) is an abusive, narcissistic, tech millionaire (billionaire?); Elisabeth Moss stars as Cecilia, his victim. After she escapes their life in the glass fortress in which he has imprisoned her, it is reported Adrian commits suicide. However, Cecilia rightly suspects her genius boyfriend has figured out a way to become an invisible stalker, terrorizing her in the temporary home she shares with cop James (Aldis Hodge), and his daughter, Sydney (Storm Reid). Whannell does everything he can to make Adrian’s torture of Cecilia viscerally terrifying for the viewer as well. It uses invisibility in ingeniously terrifying ways. Despite how much I enjoy horror movies, I rarely find them to be scary; The Invisible Man is an uncomfortably tense exception. Often, it is the waiting that gets you in this Invisible Man. Like Cecilia, you know Adrian is there; you just do not know where. That the film is grounded by its tale of abuse, which one could argue is its most easily assailable weakness, only intensifies the terror, and Moss feeds off the energy provided by trapped, powerful, female characters like June/Offred in Hulu’s The Handmaid’s Tale. The film also stands apart from the bulk of its slasher kin—because ultimately it is a low-body-count slasher—by redeeming its protagonist’s sanity rather than denigrating mental illness by using it as a crutch to explain the killer’s motive. Did I mention it was actually scary?

PORTRAIT OF A LADY ON FIRE (R) Portrait of a Lady on Fire was a popular end-of-the-year pick on multiple top 10 lists, and the reasons are several and clear. Celine Sciamma wrote and directed a film that simultaneously feels adapted from an acclaimed literary work—it is not—and wholly of the time in which it was created. The brief affair between a painter, Marianne (Noemie Merlant), and her subject, Heloise (Adele Haenel), who will soon be marrying a man she has never met, is fierily intense, but in the quiet way of period dramas. What speaks loudest in Portrait of a Lady on Fire is its imagery. Sciamma and cinematographer Claire Mathon have shot an utterly gorgeous film that may be more attention-grabbing than breathtaking. Do not be surprised if your rapt focus on the seaside landscapes or thoughtfully lit interiors leads you to miss a subtitle or two. Nearly every scene could be a work of art hanging in a gallery like the title work. Two-plus-hour, subtitled period romances are a hard sell, but those who see this Portrait will behold one of 2019’s most painterly pictures.