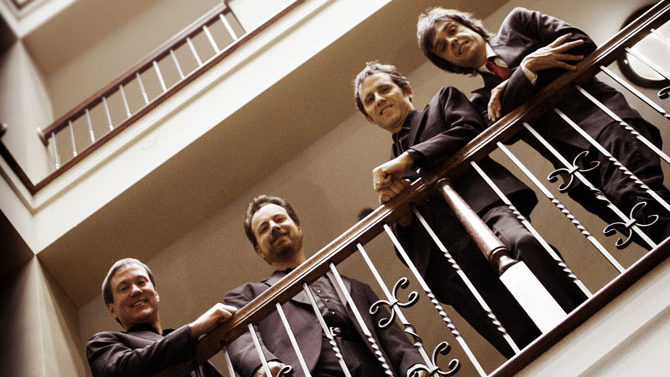 This year marks the 50th anniversary of Beatlemania, the famous arrival of those four British gents to America—an event that had an earth-shattering impact on popular music. It’s no surprise, then, that the occasion has inspired fans around the world to celebrate the anniversary with due diligence.

“From [Beatles] fans, the interest has always been consistent. [Those] people aren’t particularly concerned with it being the 50th anniversary,” says Michael Wegner of local Beatles tribute band Abbey Road Live. “That said, [the anniversary] is getting more people, more venues, more events interested in having Beatles music featured.”

Along with bandmates Dave Domizi, Andrew Hanmer and Chris McKay, Wegner has spent over a decade paying homage to the world’s most well-known rock group. The foursome has garnered rave reviews from outlets around the country, with U.S. News and World Report chiming in that Abbey Road Live is one of “the world’s premier Beatles cover bands.”

Indeed, consult Abbey Road Live’s schedule and you’ll find it’s definitely not your average regional cover act. With performances all over the United States, the band has garnered something of a national following.

“It’s a great experience, first of all,” says Wegner. “It’s nice to have the touring experience that a lot of Athens bands wish they could have. Playing Beatles music, we get a lot of opportunities to get booked and to get paid. It makes it a lot more possible for us [to tour].

“Since we do travel a lot,” he continues, “we go back to the same cities and we actually have fans that come back and see us. It took me a while to get used to [having] fans. I never really expected that to happen.”

The golden anniversary makes Abbey Road Live the obvious choice for headlining this year’s Marigold Festival, just down the road in Winterville, but it’s not the only act that will grace the stage. This year’s lineup also includes other area heavy-hitters, including Shonna Tucker & Eye Candy, Betsy Franck, Jim White, The Welfare Liners, Scott Low and the Southern Bouillon, Red Oak Southern String Band and March. The all-day event will take place on Saturday, May 17 at Pittard Park.

Although many fans might expect a grandiose celebration of the milestone anniversary, Wegner says his group doesn’t have a whole lot of tricks up its sleeve for Saturday’s show other than covering the whole so-called “Red Album,” a greatest hits collection of songs from 1962–1964.

In addition to the festival, however, Abbey Road Live is rehearsing for a rare “strings and horns” gig at the Georgia Theatre on June 6. Wegner promises the set will include “more complicated material from the later years” and that the performance will be “a little more ambitious than your average Beatles [cover] band.”

Perhaps most importantly, Wegner says that his group has made “at least a semi-conscious” decision not to sound like a carbon copy of the Beatles. “We really try to put ourselves into it and not just go through the motions,” he says. “We don’t use the exact [same] amps. We don’t re-create, per se.”

Nevertheless, Wegner says Abbey Road Live is able to “satisfy the purists”—a demographic he notes is almost always in attendance. And his own love of the Fab Four ensures that Abbey Road Live’s set will never be less than faithful.

“We’ve been listening to these songs since we were kids, and they’re stuck in our heads,” says Wegner. “The Beatles didn’t really have too many clunkers.”

WHAT: Winterville Marigold Festival
WHERE: Pittard Park
WHEN: Saturday, May 17, 6 a.m.–9 p.m.
HOW MUCH: FREE!