I arrived just in time to catch the last 30 minutes of The Whigs pound out a raucous set on the Ponce de Leon stage. “The Particular,” from their new record, Modern Creation, sounded especially sweet. It may have been mid-afternoon when the band rounded out its set, but a couple thousand fans doing the Tomahawk Chop in unison made it feel like a typical show at the 40 Watt. After the set, I caught up with the band to discuss their recent performance on “The Late Show with David Letterman.” Regarding the host’s complimentary remarks about Athens, the group expressed humility. “We try to be good ambassadors to our hometown,” said Tim Deaux. Julian Dorio agreed: “We may be in Nashville now, but if Letterman says we’re from Athens, we’ll take it.” [DM]

I didn’t do a thorough investigation, but I’m willing to bet Charles Bradley was the oldest performer at Shaky Knees this year. Lucky for those posted up in front of the Ponce de Leon Stage, he was also one of the more impressive acts on the first day. Bradley and his band, The Extraordinares, don’t simply recall the iconic ’60s and ’70s soul acts; Bradley has a groove that is undeniably his own. [DM]

Dropkick Murphys broke through with “I’m Shipping Up to Boston,” the emphatic, Celtic-tinged tune that scored The Departed and has been co-opted by many a production since. The group’s rowdy, hooliganish steez is largely unchanged since its scrappy Warped Tour days, though it’s become a decidedly more professional outfit; the band’s heretical take on “Amazing Grace,” complete with screeching bagpipes, cut through the muggy festival air with an odd sort of, well, grace. [GV]

Man Man brought their usual blend of freak-rock and performance art to the Boulevard Stage. One might think the rain would have deterred fans from giving Man Man their due, but a number of devotees stuck it out… After contemplating taking shelter upon seeing ominous clouds overhead, I caught a radio-friendly set by Spoon. The Austin band is purportedly working on new material, but there were only crowd-pleasing sing-alongs to note. “Got Nuffin” from the band’s last LP, Transference, and others from Ga Ga Ga Ga Ga had thousands bouncing up and down to Britt Daniel’s catchy choruses. [DM]

I’ve caught The National at several smaller venues over the past decade, but the band is an entirely different beast in front of tens of thousands. The group manages to remain powerful, but it’s obvious that they’re more in their element when a capable sound engineer can dial them into a particular room. Nevertheless, armed with their impressive video art rig from the Trouble Will Find Me tour, the band stunned both sonically and visually. If you’ve seen The National live before, you know their tricks. You can expect singer Matt Berninger to go out into the crowd during “Mr. November.” You can expect the Dessner twins to hold their axes high in the air while the band fades out on a song. The group’s perennial set closer, “Vanderlyle Crybaby Geeks,” from the underrated High Violet, is usually performed acoustically without amplification or the help of a PA. In an setting like Shaky Knees, that was impossible, but the crowd did their best to assist Berninger with the chorus. [DM]

By the time Athens’ Packway Handle Band took the Boulevard stage at 1:15 p.m., a sizeable crowd had assembled. Packway has always defied “traditional” bluegrass, but the songs from their forthcoming record, co-produced and co-written with fellow Athenian Jim White, wades even further away from an adherence to a classic sound. With the band’s Rattletrap (an apparatus including a few cymbals, a snare, a cajon and other sundry percussive items) manned by mandolin player Michael Paynter, it’s hard to say the new material is “bluegrass” at all. [DM]

A few quickies: Do you know Band of Skulls? I didn’t. Or, at least, I didn’t think I did. When the group kicked off “Light of the Morning,” I instantly recognized it as That Song From That Car Commercial… Portugal. The Man joins a growing list of Bands With Three-Word Names That Make My Teeth Hurt (see also: Foster the People, Young the Giant, Cage the Elephant—the latter of whom played Shaky Knees Friday), and their blankly “indie,” MGMT-aping electro-pop left me ice-cold… For his set, Conor Oberst was backed by the fellas in Dawes, and the music came off appropriately SoCal-smooth. Oberst premiered a couple tracks from his upcoming LP, Upside Down Mountain, but it was the Bright Eyes classics—”We Are Nowhere and It’s Now”; “Bowl of Oranges”—that got the crowd going. [GV] 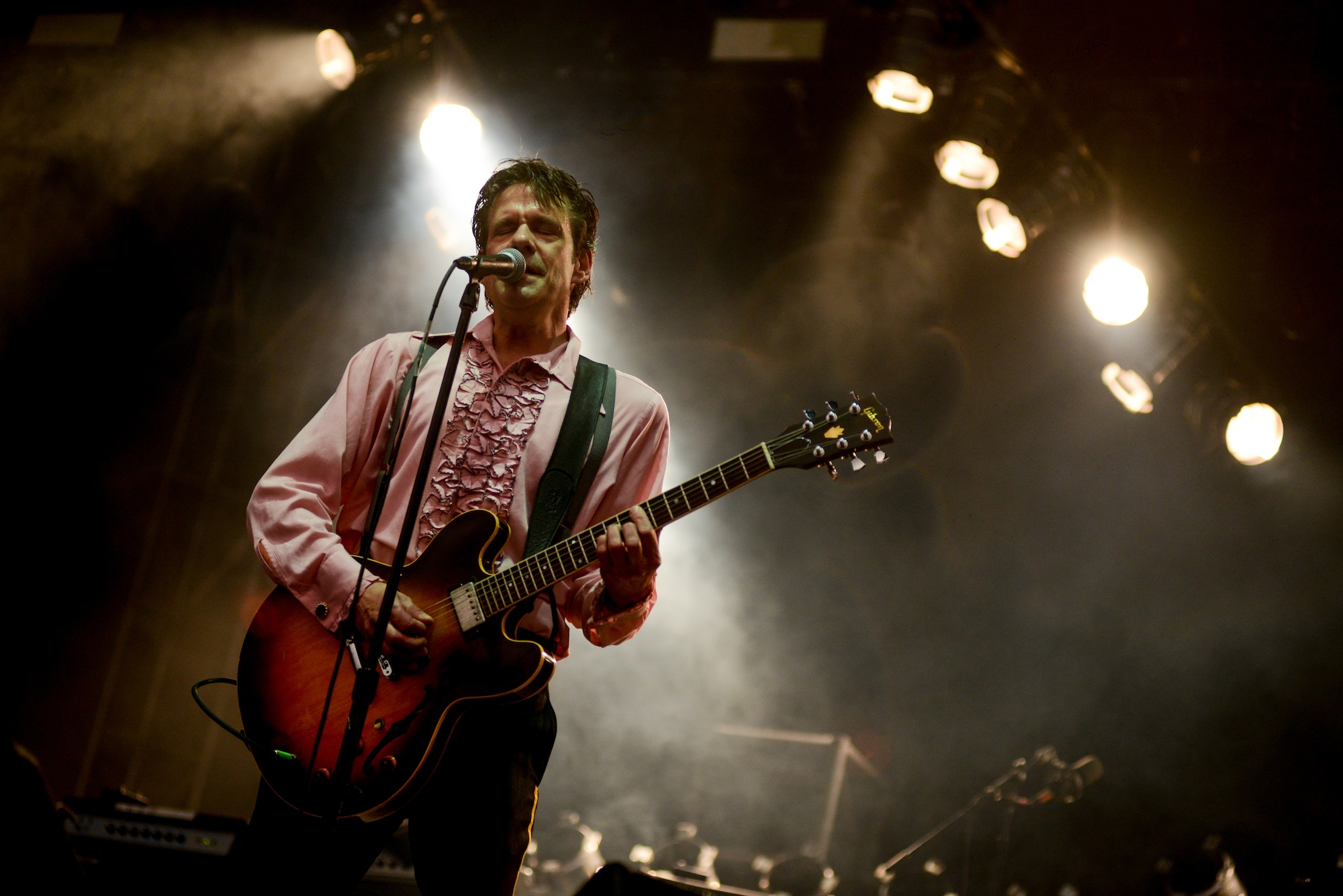 Atlantic Station in 2014 may not have been Minneapolis’ First Ave. in 1988, but The Replacements‘ Paul Westerberg and Tommy Stinson (joined by Josh Freese on drums and Dave Minehan and Green Day’s Billie Joe Armstrong on guitar) put on a spectacle that was well worth the wait. Songs like “I Will Dare” and “Alex Chilton” have become staples for a new, younger set of fans over the last decade or two, so it was little surprise that the rain-shortened set featured far more singles than deep cuts. Thousands of people drunkenly screamed the chorus to “Bastards of Young.” The Replacements are in the running for most exciting reunion act in recent memory. Here’s hoping the band has a club tour in the works. [DM]

The crowd swelled and the rain quieted as Modest Mouse prepared to take the stage. When they finally did, Isaac Brock and company were joined by several extra cast members, including a violinist, which made—or, rather, should have made—for a dense and rewarding sonic experience. Unfortunately, something was off, sound-wise. Opener “Dark Center of the Universe,” from the group’s masterpiece The Moon & Antarctica, seemed to waft from the stage and instantly float away, leaving behind a few disembodied vocals and half-felt kick-drum thuds. Maybe it was where I was positioned in the crowd—although I had been similarly positioned for other sets throughout the day and a few others backed me up in my bitchin’—but the stage sound marred an excellent setlist that included several other Moon & Antarctica jams as well as early-period standout “Dramamine.” [GV]

Deer Tick has been a consistent powerhouse in indie rock in recent years, and their mid-day appearance at Shaky Knees was the first time I’ve been able to catch them since they released their very underrated Negativity. Frontman John McCauley wore a cotton skirt. I don’t really blame him; the heat made me rethink my decision to wear jeans. The band’s full-frontal rock assault made McCauley’s fashion choices merely an afterthought. Right off the bat, the band launched into “The Curtain,” a rocker from their latest album that drove the increasingly sweaty crowd wild. [DM]

After catching the first few songs in Jason Isbell’s set (including a festival-friendly rendition of “Outfit” for the Drive-By Truckers fans present), I made my way to the other end of the lot to catch Blitzen Trapper crank out covers of Joe Walsh’s “Rocky Mountain Way” and Led Zeppelin’s “Ramble On” sandwiched between their own staples of “Love the Way You Walk Away” and “Furr.” Although I will admit that while I wasn’t thrilled with its latest album, VII, the band’s live show consistently pleases. [DM] 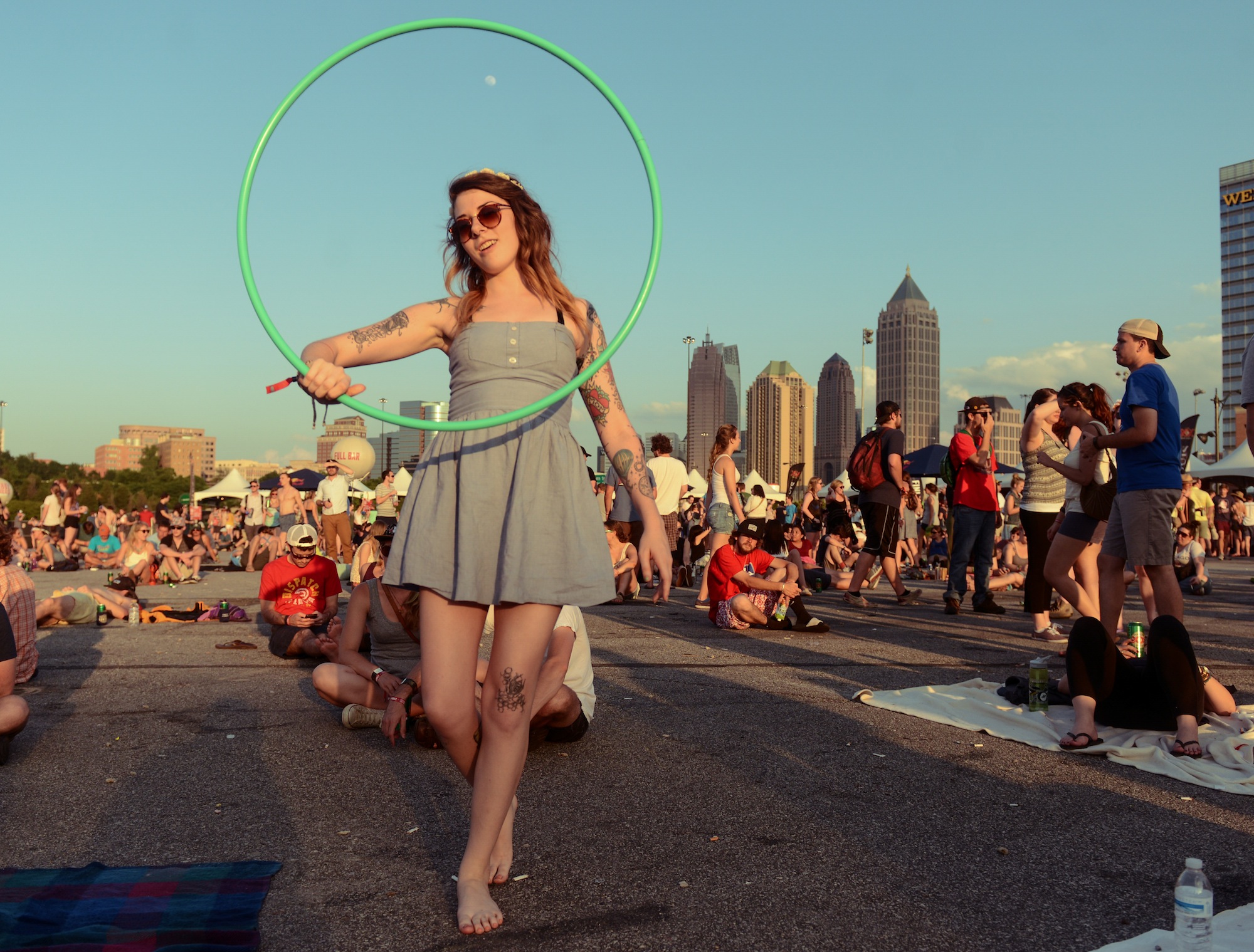 I have been a rabid fan of The Hold Steady since Stay Positive, so I stayed put on that end of the parking lot to catch Craig Finn and company serve up their pseudo-secular sermons to the most excited crowd I had been a part of all weekend. The band ripped through a mix of songs from their back catalog in addition to more rock-heavy tunes from Teeth Dreams. The new single, “Spinners,” is a special kind of earworm, and it fit comfortably next to older favorites like “Stuck Between Stations” and “Same Kooks.“ Steve Selvidge, the band’s new guitarist, earned his keep by blasting into solo after solo, stopping only to give fellow shredder Tad Kuebler his due. Finn spared the crowd his “There’s so much joy in what we do!” monologue, but his erratic dance moves and ear-to-ear grin made his sentiments clear. [DM]

I don’t own a single Violent Femmes record, but I will be damned if I didn’t know almost every song from the band’s catchy set. I also witnessed a woman on the side of the stage grooving her ass off to “American Music.” I didn’t stick around for much of the Alabama Shakes‘ closing set, so the Femmes’ hits were about as perfect of a cap to the weekend as I could imagine. [DM]

Athens, Meet Your Next Congressman (Or Woman)