Strumming and Drumming with Family and Friends 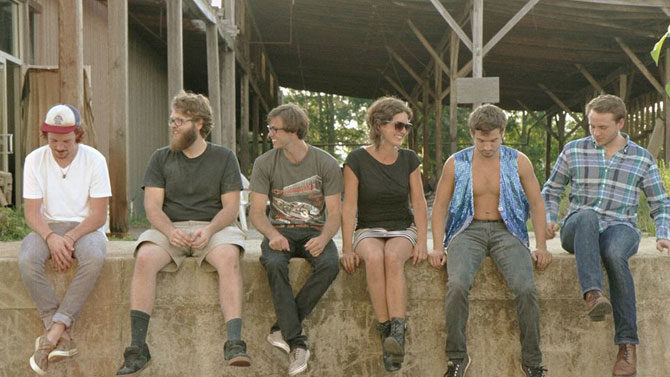 If you’re tapped into popular music in the least bit, you already know that folk-influenced rock is all the rage these days (paging Mumford and/or Sons). Mike MacDonald, guitarist and vocalist for local band Family and Friends, is fine with that, as long as you know that there’s no gimmick to his band beyond having a good time and spreading the word about its music. There are no ulterior motives here, just solid songs chock-full of sincerity.

The buzzed-about and relatively young band might just now be getting its feet wet with regular shows around town—a debut EP is on the way—but band members are proud and humbled by what they’ve accomplished thus far. Family and Friends’ show last month at the Georgia Theatre, where it opened for bluegrass hotshots Packway Handle Band, brought out folks in droves.

“We don’t have a PR team—it’s all been word of mouth so far,” says David “Tuna” Fortuna, the band’s bass player. “We haven’t had something to give people at the end of a show. So [the fans have] been doing the footwork. It’s pretty exciting.”

“For lack of a better word, we’re blessed,” agrees Ryan Houchens, one of the band’s two percussionists. “We’ve worked really hard, but I didn’t expect that response.”

Indeed, Family and Friends’ hard work has already paid off. The Theatre appearance wasn’t its only big recent opening gig; the group also warmed the stage for Seattle quartet Ivan & Alyosha at Atlanta’s Masquerade this summer. And locally, the band has been picking up steam around town for quite some time, winning over new audiences at each show and securing a weekly residency at Green Room in July.

It’s hard to measure exactly what effect such a residency might have on an up-and-coming band, but for Family and Friends, playing out in Athens on a regular basis has certainly had its positive effects.

“To have people singing [along with] parts of songs is humbling, to say the least… It makes it even more powerful,” says MacDonald, who likens seeing audiences sing along without even having a record to draw on to the forming of an “oral tradition.”

The band has distinguished itself from the rest of the folk-rock scene in one key way. Whereas many acoustic-based bands might revolt at the thought of having two percussionists, Family and Friends decided to bring another drummer, Jamie Rios, into the fold. Violist Maria Kindt and guitarist JP McKenzie round out the six-piece band.

“We wanted the live experience to be something people came back to,” says MacDonald of the range of the instruments involved. The idea of having both drummers stand up while performing was inspired by a desire to keep both the band and its audience on their toes. Houchens recalls being in the drum corps in his high school’s marching band and being told that sitting down zaps the energy of a performer. What began as a pragmatic need to conserve practice space by positioning the drummers close together became a consistent thing when Family and Friends’ audiences confirmed it was holding their attention.

Most bands might take the opportunity to play a set of covers for a Halloween show, but Family and Friends is looking forward to honing some of the originals that will wind up on the group’s debut EP, which it will record this month at Glow in the Dark Studios in Atlanta.

Band members agree that there’s something of an “eccentric cohesion” among the songs they’ve picked to record; Fortuna looks forward to the release, given that it will be something of a “grand opening” for the band.

Although Family and Friends has planned a few surprises for the Halloween gig at Green Room, members are hesitant to reveal too much. Anything could happen, it seems.

“Let’s just say I’ve been on Pinterest.” says MacDonald, eliciting laughs from his bandmates—no doubt a family of friends.

WHO: Sam Sniper, Family and Friends, Charlie and the Foxtrots
WHERE: Green Room
WHEN: Thursday, Oct. 31, 9 p.m.
HOW MUCH: FREE!