Cusses Rock Past the Pain 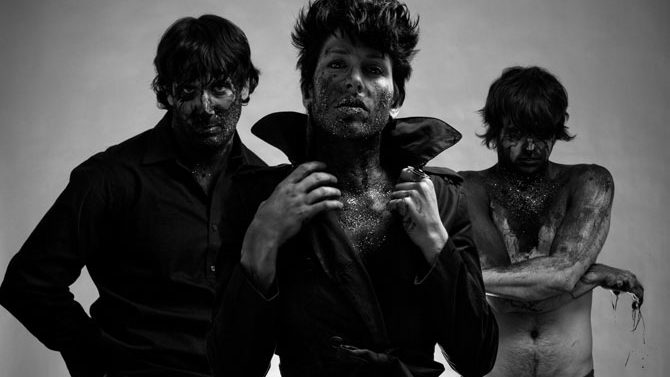 The band’s story starts at the Savannah School of Art and Design, where Bond, Lackey and Harder were like-minded classmates. Lackey and Harder had played together years ago in a punk rock band, before Lackey and Bond moved to Los Angeles together.

“We came back to Savannah soon after that,” Bond says of their brief stint in L.A. “Brian and Bryan started playing with each other again, just for old times’ sake, and they needed a singer. They asked me to join in, but I dragged my feet, because Brian is my boyfriend, and I didn’t want to be in a band with my boyfriend and ruin things. I wanted them to have their guy time.”

After she finally agreed to sit in with them, the band naturally came together. “We came up with a mess of songs within the first practice,” Bond says. “We knew that we had really great chemistry right away.”

Being the lead singer in a loud rock band was a new experience for Bond, although she’d previously performed in formal choirs and collaborated with fellow musicians.

“It was sort of new. I’d learned to play the saxophone, and done a little choir work here and there,” she says. “I used to live in New Orleans, where I sang for tips and stuff. I had not done anything to this extreme—nothing with a full-time band.”

“I love mixing up genres, because it attracts all different types of people,” Bond says. “We sometimes earn new fans we didn’t expect. You’ve got to take those opportunities to reach different people. The kids in Savannah are all pretty open to different styles… There’s a great community that’s very supportive.”

Lyrically, Cusses songs tend to touch on Bond’s personal life experiences: dramatic ups and downs, triumphs and failures. This mood enhances the dynamics of the music. There’s also a hint of perseverance and positivity where one might least expect it.

“For me, I think the first record was really about kind of getting through my past,” Bond says. “Getting through it in a positive format. I know some of the lyrics are a little dark, but I want people to know that no matter how bad things have been, or what you’re going through, you can always get through it. It’s all about your perception and reaction.”

And Bond says the band’s intense live show is a chance for catharsis.

“I do sort of put myself into a little trance,” Bond says. “Sometimes I’m choking back some very deep emotions, but I feel very relieved by the end of each show. I’m thankful that I have this band and this outlet for that. It’s a very positive way to get through your things.”

More and more people are taking notice of the music. Last month, Cusses completed an ambitious Kickstarter campaign to fund their next studio sessions at Echo Mountain in Asheville, NC and their first tour of the UK and Europe, planned for later in the fall. Ultimately, the band raised over $37,000.

“Near the end, we really had no idea if this was going to make it, but the last few days really blew us away,” says Bond. “It was a very humbling experience to see what friends and once-strangers will do for music.”

Meanwhile, Cusses will continue to tour across the Southeast this summer and fall. The band looks forward to returning to Athens this week for a fifth show in the Classic City.

“Athens is tough and brilliant at the same time,” says Bond. “Every Athens musician knows it. We’ve made longtime friends here with Manray, Twin Tigers, Caledonia owner Bryant [Williamson] and many others. Everyone here is nothing short of beautiful.”