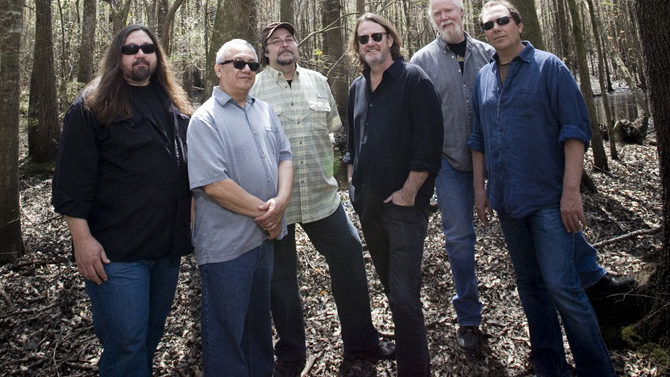 As one of the longest-running, hardest-working rock groups to ever come out of Athens, Widespread Panic knows a thing or two about pushing ahead with an optimistic, open-minded attitude. This week marks 30 years since the skillful, versatile combo performed its first proper show in downtown Athens.

“That was a wild time along that part of downtown,” says Bell. “There was a seafood restaurant called Steamers in that big warehouse building along Thomas Street, and there was a disco with a weird scene next door. The spot where the Mad Hatter Ballroom used to stand—right where the Classic Center is now—has great historic significance for Widespread Panic’s musical upbringing.”

For older fans who go back with Bell and his bandmates to their earliest days at the old Uptown Lounge, Rockfish Palace and Georgia Theatre in the late 1980s and early ’90s, this weekend’s shows are a major homecoming event. Younger “spreadheads” who caught on to the band’s groove-based blend of rock, blues and roots music later on are certainly psyched for the sold-out two-night stint, too.

“Throughout the years, we’ve had to make adjustments, whether it’s when JoJo [Hermann] joined the band in 1992 or after Mikey passed away [in 2002],” says Bell. “But we’re a go-with-the-flow combo anyway. Typically, without trying to direct things too much, we just see what we have, and that’s what we work with.”

Since breaking onto the national touring scene in the early ‘90s, Panic has been a champ of the so-called “jam band circuit.” With the early lineup additions of Hermann on piano and keys and Domingo “Sunny” Ortiz on percussion, the band explored an impressively vast variety of genres, tending to draw more from Allmans-esque Southern rock, ’70s funk and SoCal boogie than the psychedelic/Grateful Dead/hippie-rock side of things.

Panic’s penchant for musical exploration and onstage improvisation influenced the Athens scene as much as its high-level work ethic and sense of inclusion and collaboration. The group’s impact on the local music community can still be felt.

“I’m not as immersed in the scene as I was when I lived there, but it still seems very healthy to me,” Bell says. “Back in the mid ’80s when I started playing around, solo and with friends, there was a sense of helpfulness among musicians and club owners alike. You could walk into a bar and put up a flyer for a gig at another bar, no problem. And almost all of the musicians worked in restaurants together, so there was that built-in social aspect, too. It seems like there’s still a lot of that going on in Athens.”

While the band’s main office remains downtown, and Ortiz and Nance still live in the Athens area, the rest of the guys are scattered across the Southeast. Bell and his wife split their time between western North Carolina and northeast Georgia. Hermann is headquartered near Nashville, TN. Schools currently resides in California. Guitarist Jimmy Herring, a co-founding member of Col. Bruce Hampton and the Aquarium Rescue Unit who joined Panic in 2006, lives and works in the Atlanta area.

“For years, we all lived together under the same roof for… a long enough time,” Bell says with a laugh. “It was fun, but we were glad to get our places when it became economically feasible.”

Young timekeeper Duane Trucks signed on in 2014 to fill in for Nance, who opted to go on hiatus for personal reasons. Last year, Panic invited Trucks to perform on a new studio effort, Street Dogs. Longtime producer and Athens resident John Keane joined the band to oversee the sessions at Echo Mountain Studios in Asheville, NC. Compared to some of the slicker audio mixes on previous studio releases, Street Dogs works more from a raw and roomy “live” sound by design.

“There were a number of elements involved as we approached recording this new album,” Bell says. “We figured recording at Keane’s studio in Athens would provide too many distractions and visitors, so we wanted to go some place where we could focus, be comfortable and be anchored in a fertile social environment… We’ve always recorded live in some way, and this time, we were interested in capturing the live performance and working from that.

“We wanted to get away from many of the pitfalls of the sort of assembly-line approach to making records,” Bell adds. “All the songs were in different stages of familiarity to us. Some songs were written very quickly in the studio, while others had been taking shape for quite a while.”

In an amicable transition over the last few months, Panic has welcomed original drummer Nance solidly back into the lineup. He will be on the drum kit for all of the 2016 tour dates.

“I look forward to being together on stage, when the communication is at its peak and everyone is intuitively in synch with each other,” Bell says. “It’s similar to when you partied with your buddies back in the old days; you were in a different realm, but you were all on the same page. Musically, when all that comes together, things open up and time slows down. You’re able to do more things collectively. It’s a realm in which you can tell everyone is listening and communicating very well. Those were the magical moments that we really grooved upon.”