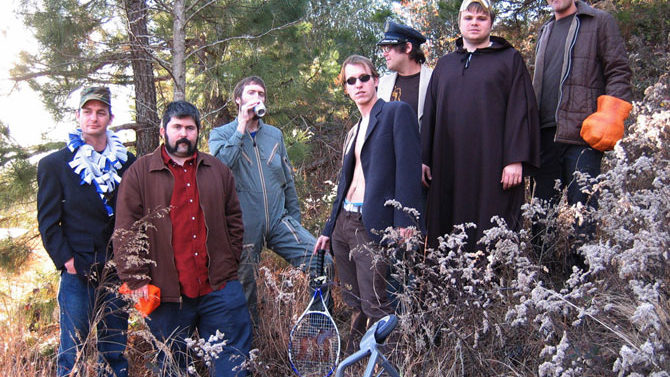 It’s amazing what some bands can accomplish while on hiatus. In the case of Georgia-based indie collective Je Suis France, things have been surprisingly more prolific in the years after the group disbanded than in its hot and heavy Athens heydey during the late 1990s and early 2000s.

As is the case with many college-town bands, the members of Je Suis France scattered across the country to pursue job and artistic opportunities and start families. Somehow, they stayed connected. This Friday at the Caledonia, most of the core members will reconvene to perform a set of old fan favorites, as well as a fresh pile of recently composed tunes. Billed as “Je Suis France’s 20th Birthday Jam,” the event celebrates the 20th anniversary of the band’s first-ever show in Athens. It’s also the band’s first gig in Athens since what it remembers as a “muddy affair” at The World Famous in March 2014.

“We added ringers throughout the 2000s to replace those of us who moved out of Georgia, and that made us sound better than we probably actually were, but we’ve always been less of a band than just friends hanging out,” says guitarist, organist and co-founder Garrett Ryan “The Darkness” Martin, who’s currently based in Atlanta. “And that hasn’t changed.”

The France lineup has indeed changed over the years, revolving around a solid core of guitarist-songwriters. For the Birthday Jam, the roster will feature Martin on organ and guitar, DJ “OJ” Hammond and Jon Croxton on guitar and bass, Sean “SA” Rawls on guitar and synth, Jeff Griggs on drums and bass, Ryan “Ice” Bergeron on bass and Ken Henslee on keys and percussion.

Based in Los Angeles, later-era guitarist Chris “Crog” Rogers can’t make the trip to Georgia this time around, although Martin says, “He’ll be there in spirit—and also in hologram form.” Also missing will be drummer Jeremy Wheatley, who coincidentally has another show in Athens on Friday.

Listening to the France’s early catalog, it’s mostly wild hits with only a few downright misses. Some tracks seem expertly produced, while others come off as hastily documented with the lowest of lo-fi gear, which usually works fine for the band’s style. Throughout its career, the band drew from various styles of underground rock, from the strummy drones of the Velvet Underground, the brutal thump of The Monks and the jangly mischief of Camper Van Beethoven to the compact and terse styles of Wire and Minutemen and the poppier sides of indie-rock contemporaries like Built to Spill, Pavement and Sebadoh.

The same stylings rear up on the group’s most recent releases, the 24-song Let’s Give ’em Something to Talk About compilation, from 2011, and its 2013 follow-up, Coleslaw III Drymouth. It’s still a jumble of straightforward pop-rock interrupted by disjointed pieces of psychedelic experimentation and the perhaps-accidental sounds of swirling guitars, drums and shouted harmonies.

“We definitely haven’t gotten better at our instruments,” says Hammond, who’s also based in Atlanta. “One thing that has never changed is that this band has always been about not caring what people think and making each other laugh. Early on, I remember people thinking that all we did was have inside jokes on stage, but really it was us just trying to make the next guy laugh. The songs may have gotten better as an added bonus.”

“We pretty much all write stuff on our own and then help polish them off together as much as possible,” Martin says. “Sean’s doing stuff on his own, and Jeff’s done some work with Ken. Normally, we record final versions of stuff at Ken’s house, but he’s building a new studio at the moment. We’ve also recorded a lot of stuff at a cabin in north Georgia in 2015, and some of that will be on these records due for release this fall and winter.”

The band has already finished up basic tracks for a forthcoming EP titled Darkstard, reportedly a twist on the Grateful Dead’s “Dark Star.”

“The songs sound great, and the France fire has absolutely been reignited,” says Hammond. “Lots of positive vibes going.

“We’ve always tried to straddle the line of what is a good idea and what is a really dumb, bad one,” Hammond adds. “Most will say we’re usually about 50/50 on those decisions, but in our mind, they’re all pure gold. A perfect example is that time we made an EP called Mind Zappa, where we printed out all these tabs to a bunch of Frank Zappa songs and just imagined how they should sound. Then we recorded and released them. Did we ever listen to the original Zappa songs for guidance? Of course not. Who would be dumb enough to do that?”