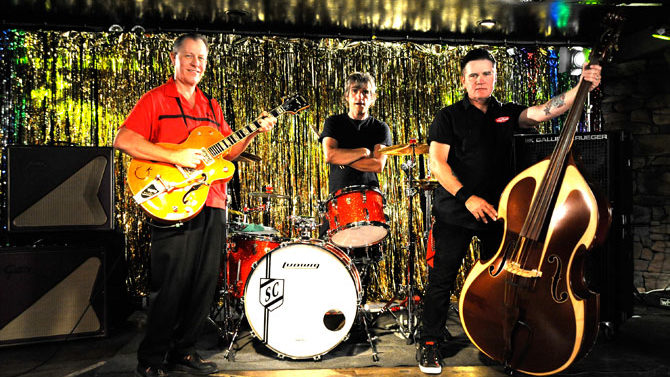 Whether wild and crazed or melodic and downright sweet-tempered, veteran Texas trio Reverend Horton Heat delivers twisted riffs, hot chops and big beats with an unflinching willingness to rock out. Led by singer and guitarist Jim “Reverend Horton Heat” Heath, the band has outlived many of its retro-rock contemporaries and shows no signs of slowing down.

“We were lucky that we’ve been able to do just whatever we wanted to do,” says Heath, speaking from his home in Dallas on the eve of the band’s current tour. “We’ve always kind of flown under the radar and done our own thing that was different from most of what was going on elsewhere. It’s been a hell of a trip.”

An impressively proficient guitarist and frontman with a yelping howl, Heath formed Reverend Horton Heat in the mid-1980s. The band made its first splash in the alternative rock scene in 1991, when Heath and his trio hooked up with the Sub Pop label. The psychobilly and garage-rock leanings of the ’91 album Smoke ‘Em If You Got ‘Em and 1993’s follow-up The Full-Custom Gospel Sounds of the Reverend Horton Heat earned acclaim from fans and critics alike.

Along with original bassist Jimbo Wallace and longtime drummer Scott Churilla, Heath is back on the road in support of the band’s latest studio release, a 13-song collection titled Rev, released by Victory Records in January 2014. Their 11th studio album is a carefully executed set of riff-driven rockers and ballads deeply rooted in the raw, aggressive rock and roll sound of Reverend Horton Heat’s earlier material.

“Our previous studio album, Laughin’ & Cryin’ with the Reverend Horton Heat, leaned really far into country,” says Heath. “Me and Jimbo got to talking before we put Rev together, saying to each other, ‘You know, we just need to be rockin’.’ Every album we make has a country song or two, and I love that, but I think Rev gets back to the rock sound that we’d developed in the mid-‘90s.”

From the breakneck speed and heavy swing beats of rockers “Longest Gonest Man” and “Never Gonna Stop” to the Johnny Cash-style storytelling ballad “Hardscrabble Woman,” Heath and his crew apply their own twists and reworkings to early-era rock riffs and rhythms.

“We did want to make it more hard-hitting,” says Heath. “I loved rockabilly and all of its high energy back in the late ’80s and early ’90s, but I wanted to come up with my own thing. I wrote my own rockabilly songs, and I wanted to get more turned up and aggressive. That’s what led up to the big sound in the mid-‘90s, and that’s kind of like what happened as we put Rev together.”

“As kind of a surprise for this tour, we’ll have Unknown Hinson sitting in with us mid-set,” says Heath. “We’ve learned five or six of his songs, so that’ll be a cool new thing. It’s not him with his band; it’s Hinson doing a show with us. The original rock and roll shows were like that, when acts would back each other up with little sets.

Fans can expect a new album from Reverend Horton Heat sometime in the near future, but the band is glad to take its time putting things together.

“I’m not sure when the next original album will come down the pike. I know it will come, though,” says Heath. “I’m so busy all the time with little projects with other musicians and gigs with the band, it’s hard to say when we’ll get back into it, but I already have some ideas. I love being in my studio. I noodle around and jam around all the time. But putting the time and effort into making a new album—that’s serious, Jack.”