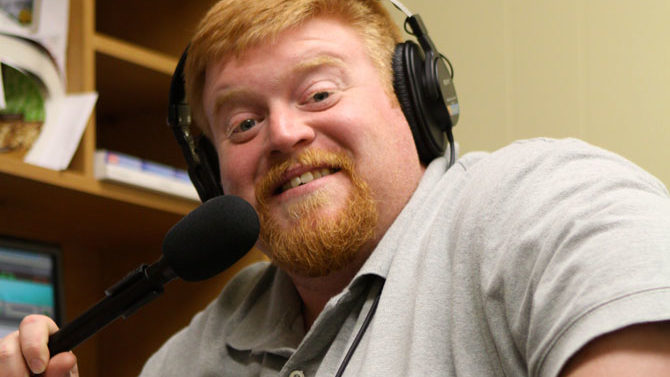 If you’re one to scan the dial in five o’clock traffic, you’ve likely noticed that a new radio station has cropped up in the last year, one that presents programming unlike any other station in town: EZFM, the only oldies/easy listening station in Athens (at 88.1) and Lake Oconee (89.9). Its slogan? “Music to Your Years.”

EZFM, a commercial-free 501(c)(3) that relies on listener donations and sponsorships to stay on the air, was founded in June 2012 by James Hutto, a heavyset man in his early 30s who jokes, unfairly, that he has “a face for radio.” He projects a calm and confident air that puts others at ease. Red-headed, with a quick smile and arrestingly blue eyes, he leans forward in his office chair in conversation, fully engaged, sometimes studying his fingers when he’s lost in thought.

Hutto began his career in radio in 1992, at the age of 12. His father was a radio man and worked with the likes of Marlin Taylor, who went on to help found XM Radio. At the time, he was working for 88.9 WMSL in Athens.

“They had interns, and a bunch of people didn’t show up. And they had some shifts at night they needed filled,” Hutto says of his first gig in the radio business. “I went in and did like a six-hour shift… it was carts and reel-to-reel machines and some CDs, that kinda thing.”

Hutto has rarely stepped away from the mic since. He worked with WMSL through junior high and high school, before dropping out in 1997 and joining Southern Broadcasting, which managed such local stations as Rock 103.7. He bounced between companies in the Athens area for a few years before relocating to Atlanta to work for Clear Channel, a move that eventually caused him to walk away from radio altogether. (“I saw a lot of ugliness at the corporate level,” he explains.)

After stepping away for a few years, during which time he married and started a family, Hutto decided to return both to his hometown and to the industry he loved. He returned to WMSL as programming director in 2006 and stayed on until last year, when he hatched the idea for EZFM.

At the time, 88.1 was a foundering station specializing in Christian programming. Hutto was consulting with the station on technical issues, and one day, he says, its owner asked him, “If you had the opportunity, what would you format this with? How would you change the station?” Drawing from the example of his father, the programmer for one of the standard-bearers of easy listening radio, Atlanta’s WPCH, Hutto proposed EZFM.

“The end game was always to take care of… the older generation, because they’re not really serviced,” Hutto says, noting that technology and consumer culture have largely left that market behind. “Those are the people who helped define who we are. They are the generation that helped stabilize this country through wars. And I felt like their needs weren’t being met.”

In the age of smartphones and Spotify, many younger people take for granted that they have access to virtually all media, from anywhere, at any time. But their parents’ and grandparents’ generations often don’t have that luxury, having either not adopted or been assimilated into the culture of the digital age. A favorite song is not necessarily just a click away. With his station, Hutto has created access where there was none before.

“A lot of our transportation vehicles listen to the station, and several people who came into the office recommended that we sponsor them,” says Kadee Holt of the Athens Community Council on Aging. “We’re serving the same demographic.”

But it’s not only older folks who have taken notice. Hutto reports that he also has a strong fanbase among college students, and he regularly gets phone calls from listeners moved to tears by hearing songs from their youth.

“There’s some song this woman [requests] all the time—Vic Damone. She loves that guy. Calls up and says, ‘Thank you so much for playing Vic Damone. My mom used to always listen to him when we were doing laundry. And it just reminds me of that smell and being at home.’ That’s what we do. That’s why we say ‘Music to Your Years.’ This is the soundtrack of your whole entire life.”

Above all, Hutto is a believer in the family aspect of radio. “I got to learn from someone who really believes in this as a craft,” he says. “My most memorable times in my life were watching my old man do his thing and being good at it. We go out to remotes, and my kids get to grow up around radio. They get a kick out of it—and they love wearing the [EZFM] t-shirts.”

As Hutto prepares to head out from the station this particular afternoon, a well groomed man in his 50s wanders into ABC Printing, the West Broad Street building from which EZFM broadcasts. Tapping lightly on the door, he enters.

“I’m with the pastors over at Beech Haven [Baptist Church],” he says, beaming and reaching out to shake Hutto’s hand. “Just wanted to say I listen all the time!”

The smile on Hutto’s face could not be wider. He’s practicing his craft, and the people love it.