Speaking the Language of Jazz With Louis Romanos 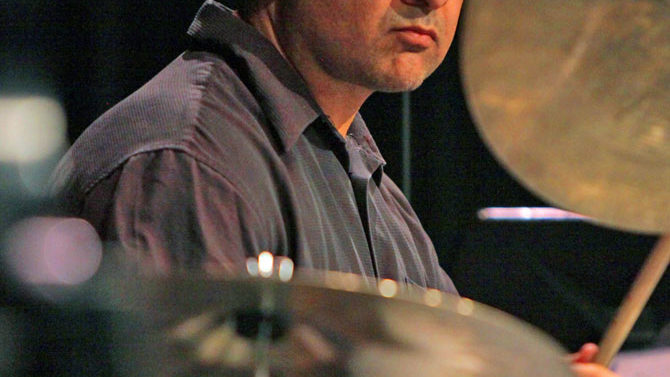 “There are some people who like it, but you can’t support yourself making jazz here,” he says.

More’s the pity, because the Louis Romanos Quartet—where Romanos is joined by guitarist Dan Sumner, trumpet player Alex Noppe and bassist Neal Starkey—are an accomplished bunch making music that is by turns textural and melodic, simmering and rhythmic.

Instead, Romanos spends much of the year on the road, performing at concerts and clinics. Soon, however, Athens will finally have a chance to enjoy his craft. The quartet is preparing for a release show for a brand new album, Take Me There, Mar. 22 at Hendershot’s.

The venue is an apt choice, given owner Seth Hendershot’s stated intention that it be “a listening room.” “Listening” is a word that comes up often when Romanos talks about what his quartet does.

“We’re all having a conversation, and everyone is listening,” he says. “My model is organic. I want to hear them and be listened to and heard by them… That just takes a certain personality. I purposefully surround myself with people who know how to listen, but aren’t timid.”

“Conversation” is a well established jazz metaphor, especially for those who, like the LRQ, incorporate improvisation into their playing. But Romanos frames it in a new way.

“When somebody plays something through a horn, he is playing vocabulary that he’s learned, that’s in the lexicon and the culture. I’m responding to it creatively within the same paradigm,” he says.

That sonic vocabulary, according to Romanos, who frequently plays around Europe as well as the U.S., can even have an accent. While the lexicon is the same across cultures, different peoples speak jazz differently, he says.

I purposefully surround myself with people who know how to listen, but aren’t timid.

“The Germans’ take on it is to take it apart and look at it even more and be more intellectual. They’ll ask me to break up the swing even more and make it more interesting. ‘Grooving is boring! Make it more cerebral!’ It’s very funny.”

Romanos is originally from New Orleans—like so many artists, he left after Katrina—but his own musical accent doesn’t often echo the type of jazz his hometown is known for.

“For me, the New Orleans connection is the preeminence of groove, and that everyone is part of it… I’m drawing a lot on Latin and Cuban culture, and then some Mid-East for rhythms and harmonic content,” he says.

Philosophy is another of Romanos’ interests. In fact, he is a scholar of it, as well as of music—one pursuit hinges on groove, while the other is arguably about as groovin’ as the click of a metronome. But Romanos sees an affinity between the two.

“Philosophy is the deconstruction of thinking and thought, and the reconstruction of it, as well,” he says. “Music is a language. It’s a thought. It’s thinking with sound. If you go to music school… there’s a lot of, ‘That’s correct. No, that’s incorrect.’ You can get stilted in the thinking of, ‘I can’t play that scale over that chord, because it’s going to sound bad.’

“If you let go of all that, and study why something is considered correct or incorrect, you can free yourself of those limitations and start creating with thought forms that are more intrinsic to you.”

Like a new philosophy, music has the power to transform; never is that truer than when sitting in a room with people making music and really listening to them.

“If [music] only ever awakened one idea in you, it could change your entire path,” Romanos says. “That’s powerful. And it’s very quiet. It’s an invisible way to work.”