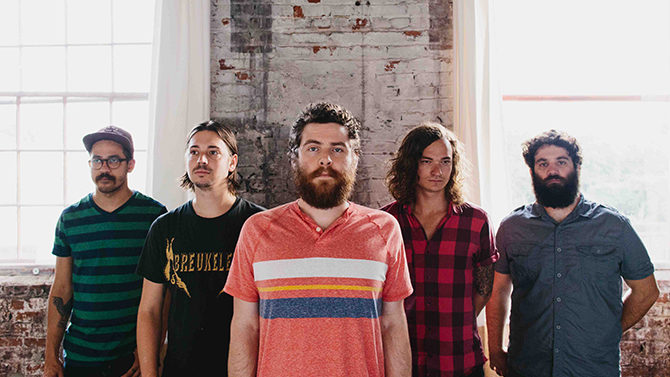 We’re in the midst of an EDM-crazed zeitgeist, where synthetic sounds dominate airwaves and record grooves. But it’s not for everyone. So when, after wrapping up the tour for their last album, Simple Math, Atlanta rock band Manchester Orchestra found itself without a label, its members decided to make the kind of album they wanted to hear.

“I think there isn’t enough guitar music, so maybe we can be the band that rolls that ball down the hill,” says frontman Andy Hull. “There’s lots of bands playing really cool grunge and rock music. It’s just not what’s being focused or highlighted by the main press. There’s still people coming to our shows who are really interested in [rock music]… We’re one of those bands that’s always a little against the wave of what’s supremely popular at the time.”

While it’s tough to entertain the idea of rock and roll as outsider art, Hull does have a point: Rock has diminished, at least in the mainstream. Cope—released earlier this year via Concord subsidiary Loma Vista and the band’s own label, Favorite Gentlemen—is Manchester Orchestra’s contribution to the counter-electrosurgency.

While not quite as heavy-hitting as the band would perhaps like to believe—Hull has thrown around the word “brutal” in interviews to describe the album—it is a rough-and-tumble collection of loud, densely arranged rock songs, glazed in acrid adult frustrations. Hull’s lyrics, which at times feel overwrought, also occasionally offer rich imagery coupled with a gut-punch of sentiment, like when he sings on “Top Notch,” the searing opening track, “We all believed in ghosts/ Until you walked into a wall.”

Manchester Orchestra’s brand of emo-tinged rock, like that of sonic brethren like Brand New, with whom the group has toured in the past, chooses catharsis over escapism.

“This will be, like, the ear-bleedingly loud rock show,” Hull says of the group’s Aug. 6 performance at the Georgia Theatre. “It’s been the most fun album we’ve played live.”

That fun arises in part from the fact that the band—Hull, guitarist Robert McDowell, keyboardist/percussionist Chris Freeman, bassist Andy Prince and drummer Tim Very—recorded Cope while all “standing in the same room playing,” a departure from their usual methods.

In fact, most of the process was a departure—from a former record label, from an established way of working, from a former member (bassist Jonathan Corley left after Simple Math) and from the big, orchestral sound Manchester Orchestra had put forth on its last album. The band members even got together, bought a house in Atlanta and gutted it to build the studio in which Cope was recorded.

All that upheaval surely had something to do with the record’s title. And, from the looks of the band’s “Letterman” appearance in March, Hull and company still connect viscerally with the feelings behind the songs. Amid a near-seizure-inducing light show, Freeman lurked over the edge of his keyboards; head-banging, Prince and McDowell wore halos of flipping hair; and Hull gave a foot-stomping, voice-cracking performance of Cope’s title track—which, while not the strongest track from the record, shows quite well in the live context.

The clip is barely over four minutes long, but it gives a good sense of why the group has developed a reputation for leave-it-all-on-the-floor shows, and supports Hull’s argument that this is probably its best record yet to witness live.

There are other signs that Manchester Orchestra feels it has something special in Cope. When reached for this interview, Hull has just left the studio, where he and the rest of the band are retooling Cope’s tracks for a re-imagining of the album, titled Hope.

“It’s all really stripped down… versions of the [songs],” says Hull. “Later this year, we’ll do a tour behind it. When we were writing the album, we found that these songs really worked in this kind of pretty, stripped down way, as well. It was always our intention to explore this counterpoint of these songs.

“I’ve gone back on some lyrics and rewritten some stuff,” he continues. “I spent a lot of time on the melody and the way the songs flowed and the lyrics. [Cope is] a very fast record. When I listen to it now, after working on a calmer version, some of that stuff gets lost and is over really fast. When we added breadth to the songs, they were able to expand.”

As exciting as all this is—having a record he’s proud of, touring behind it and digging deep into songs he enjoys playing—Hull has one big distraction: a new baby girl, who’ll be approaching her onemonthiversary the week of the group’s Athens show. With Hope on the way and a very good excuse to write quiet music now, perhaps we’ll see Manchester Orchestra mellow soon. Still, given the band’s output thus far, we wouldn’t expect any lullabies.

Burglar Has Terrible Taste in Liquor