The New Faces of EDM in Athens 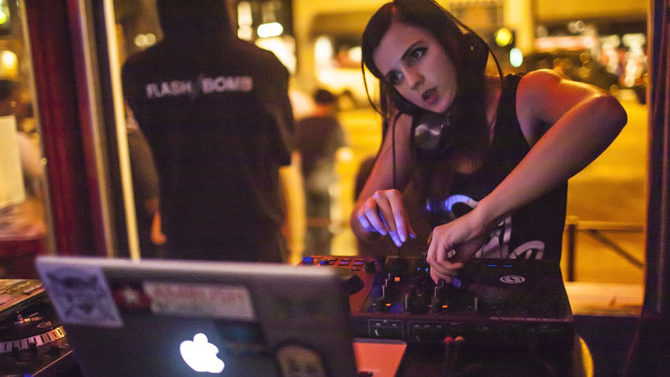 For every time, there is a musical zeitgeist. The early ’90s brought us grunge. A decade later, boy and girl bands ruled the airwaves. The last few years have seen the rise of electronic dance music, or EDM, a sonic trend that’s permeated everything from Top 40 to major music festivals.

The genre is gaining prominence in the local scene, too, thanks largely to its adoption by the students—particularly, those of the Greek variety—on UGA’s campus. Charmed by EDM’s flexibility (its defining characteristics—percussive beats, high energy, nonstop motion—can be wedded with virtually any other genre) and recognizing the potential to turn a profit, local musicians with leanings toward hip hop, DJing, house music and more have begun to dabble in the more straightforward party-centric style.

Recently, a proper scene has started to emerge, centered around venues like New Earth Athens, Green Room, Barcode and Cutter’s Pub, as well as newer spots like The Flight Deck. As the scene has grown, like-minded musicians and DJs have crystallized into groups, putting on shows and scheming up ways to make a name for themselves beyond Athens.

Chaotic Entertainment (formerly Smash House Entertainment) is one such group. It started in summer 2013, when Ian Paulin, aka Mob Knarly, started DJing pool parties at The Lodge apartment complex on North Avenue. From there, he was joined by former Future Ape Tapes member Brian Walker, aka Luke Highwalker, Ryan Harris, aka Flashbomb, and others, growing from poolside to proper downtown venues, starting with the upstairs space at Cutter’s Pub.

By virtue of its versatility, EDM can be difficult to define. Walker characterizes it as “music that’s not completely based on lyrics. It can be something like Skrillex to Daft Punk to Avicii. It’s in everything. Katy Perry’s ‘Dark Horse’ is trap [an aggressive style that originated in Southern hip hop]. Ellie Goulding is the pop side of it.”

When you hit up an EDM show, it can be tough to know what you’re going to get. But the two main crews in town—Chaotic and CrushTeam, with its leaders Andy Harrington, Will Weber, Robbie Beck and Tyler Glenn—do break down along some stylistic lines.

“My DJs are a lot more grimy [than the Pretty Lights school of EDM],” says Trampus Anglin, a DJ and business manager of sorts for Chaotic. At 36, he’s one of the oldest people in the crew. “There are so many genres: trance, deep house, space—which sounds like Transformers making love.”

But trap, it seems, is the sound of the moment. “Trap is really big here,” Anglin says. Its popularity is a mixed bag, according to Harris, a lanky 25-year-old with petite gauges in his ears, who says it inspired lesser talents to get in the game.

Athens was steez! Now, everyone is a producer.

“I’ve always been the mixer with iPods, doing weird music and hype music. I got taught by Tyler Glenn,” he says. “2011 is when the new age of dubstep and trap came in. Trap changed everything. I feel like the quality of DJs has faded. Athens was steez! Now, everyone is a producer.”

Harris, however, understands his role not only as a “button-pusher,” queuing up songs, but also as an entertainer. This year, he was invited to the Counterpoint Music Festival outside Rome, GA, to DJ the “silent disco,” where attendees listened to the set via headphones.

Where Chaotic’s scene has sprouted up around a standing Thursday night engagement at The Flight Deck, apartment complex pool parties and occasional raves at Barcode, CrushTeam’s parties often center around New Earth, Green Room and the Georgia Theatre.

CrushTeam’s Glenn, aka Trogdor, is something of a local EDM godfather, a player whose name is checked by nearly everyone interviewed for this story. But it’s Harrington, aka Andy Bruh, Weber, aka Stellashores, and Beck, aka Robbie Dude, who seem to be most prolific.

The CrushTeam crew, to hear the Chaotic boys (and girl—there is one female DJ, Lauren Hunter, or Tigrlily, in the crew), “do more hip hop-style DJing, with a lot of scratching. Their DJ shows are also more lyrics-based and song-driven.”

Glenn’s DJ style also showcases a cheeky sense of humor. The first track listed on his SoundCloud is Pyramid Scheme’s dubstep remix of Enya’s “Only Time,” which is both surprisingly well-suited to the clacking percussion of EDM and funny, when the anticipation of the dropped beat is finally satisfied.

Harrington confirms CrushTeam’s hip hop leanings. “I love bass-heavy music,” he says. “Hip hop-influenced stuff. [There’s] lots of hip hop in my DJing set. [I’m] trying to bridge the gap between a jam-band sound and a dubstep/electronic sound, driven [by] a fat 808 and crunk melodies.”

Like Chaotic’s regular Thursday night engagement, CrushTeam has figured out the value of having a predictable schedule fans can rely on, synced up with other student-driven events. This fall, the crew will put on regular gameday shows at Green Room. Harrington also says CrushTeam has plans to incorporate live bands into their shows, something Rock and Dee Elrod, the owners of The Flight Deck, are also looking to do.

“I’d like to get to the point where we can mix it up, have bands come play from 8–12, get the people in here and then, when the bands head out, have DJs play,” Rock Elrod tells Flagpole.

With demand for EDM still growing, Chaotic and CrushTeam have their eyes on writing more original music and pushing the local scene forward. Ultimately, success could mean gigs at festivals around the Southeast and beyond, and with followings growing in the bigger Atlanta market, both crews seem poised to seize upon their momentum.

Making it to those festivals might be a challenge for the average UGA student or working Athenian. Luckily for local ravers, the beat goes on right here in town.

WHAT: Rave Night
WHERE: The Flight Deck
WHEN: Every Thursday, 10 p.m.
HOW MUCH: FREE!