The Righteous Anger of Lee Bains III & The Glory Fires 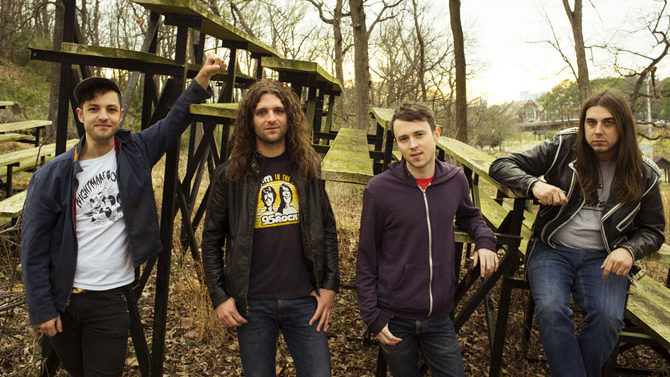 In late summer 2014, as America faced questions of inequality following the shooting of Michael Brown in Ferguson, MO, Lee Bains III & the Glory Fires were touring behind Dereconstructed, a fireball of a Southern rock record with its sights set squarely on racism’s shameful legacy in the South. Released in May, Dereconstructed, the band’s debut on its new label, Sub Pop, unpacks a lifetime of righteous indignation, questions the Southern identity and rejects hate born out of a youth spent in a state that was once a center of racial hatred, Alabama.

“I think part of the reason I felt so strongly about writing the songs was that I knew those tensions were only going to boil over,” songwriter Bains says. “When I started writing the record in 2011, the Arab Spring was going on, and the Occupy protests. Those were sort of uncovering some of those latent issues that I had been thinking about. So, I wanted to bring those issues and those tensions to bear on my own experience in the South.”

Boil over those tensions did, making Dereconstructed—which features indictments of everything from the tactics of Bull Connor, the Birmingham police chief responsible for the use of fire hoses and attack dogs against civil rights protesters in 1963, to modern bombings of abortion clinics—particularly timely.

“I think that having this record out and playing in St. Louis a couple of weeks after Mike Brown was murdered is a sort of grim vindication of the motives behind these songs and what I was trying to do,” says Bains.

Dereconstructed is sometimes puzzling; the choice to deliver Bains’ thoughtful, intelligent, compassionate sentiments through the medium of what Pitchfork called “bloozy rawk” is an interesting one. Then again, the record is about roots, and Bains’ are entangled with those of his previous group, the fiery Dexateens, as well as bands like Lynyrd Skynyrd, who play no small role in the lives of many young men growing up in the former Confederacy.

It’s no wonder that Bains often gets mixed up with the party-rockin’ side of Southern music. “I certainly don’t identify with the shit-kickin’ or whiskey-swillin’ qualifiers that are sometimes thrown around,” he says.

Having this record out and playing in St. Louis a couple of weeks after Mike Brown was murdered is a sort of grim vindication of the motives behind these songs.

Still, the Glory Fires’ music, often driven by righteous anger and colored with Biblical language, is an impassioned good time, regardless of how you feel about the topics underlying the lyrics. But as Bains points out, the progenitors of Southern rock often took on the social issues of their time in subtle ways.

“I think that Lynyrd Skynyrd and some of those bands did a lot to challenge the notions of young white people who had gone to school in segregated schools. I think that they probably challenged some of their standing ideas about the war in Vietnam, and they did that on their own terms, within the communities and the culture where these kids lived. I find that to be pretty inspiring.”

Bains also bucks Southern-rock stereotypes by penning dense, at times verbose lyrics like “Senior year, you could go deaf from all the talk of terrorists and Muslim fundamentalists/ And I thought it strange in a town where so-called believers blew up women’s clinics we had the gall to act so offended.” Dereconstructed’s hardcore pacing and art-rock literacy find a way to cram it all in, but it seems a shame that those carefully written words speed by in such a hurry.

When all’s said and done, Bains is simply trying to suss out the complicated issue of what it means—to him—to be a Southerner.

“If you want to know what the South is, you’re going to have to ask every Southerner, because they are all going to have a different answer. [My goal] was to reclaim my Southernness and to do so on my own terms,” he says.

That this reclamation wound up dovetailing with a growing national conversation about our past—and our future—regarding issues like race relations, wage inequality and women’s rights, makes the Glory Fires particularly interesting to engage with now.

If that’s all too heady for your tastes, don’t worry. Dereconstructed may not have been fueled by whiskey-swillin’, but it’s still damn fine music to sip a Southern Comfort to.