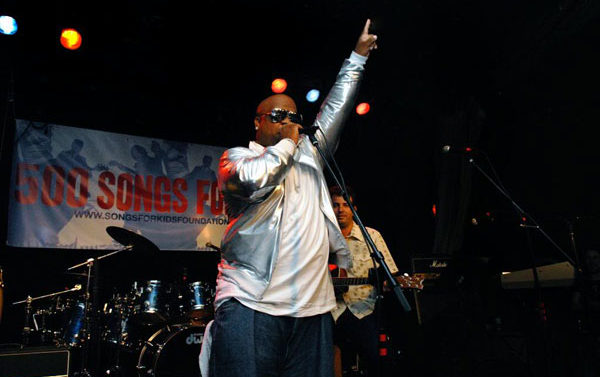 “Kids don’t have any motives. They don’t care how hip you think you are,” he says. “They’re smarter than you are. They know when you’re genuine.”

And when Rifkind, who also manages The Whigs, brings his musician friends into children’s wards in hospitals across the state to jam with the kids, he knows it has nothing to do with how talented he is and everything to do with how he can use music to help sick children continue to connect with the outside world.

“It’s not so much a performance as an interaction,” he says. “We record with the kids. We go bedside and record songs with them and they get a CD…You can see a light switch go on, and they realize they can do something musical, too.”

It’s a rare and special connection that inspires the participating musicians as much as the patients. “You could honestly have the worst day ever, leave the hospital and not be having the worst day,” Rifkind says. “The kids are amazing.”

And what better way to raise money for a worthwhile cause than with an equally amazing benefit event?

500 Songs for Kids, the biggest music charity event in Georgia history, serves just that purpose. Now in its fourth year, the 10-day extravaganza features 500 musical acts recruited from across the region, each playing a cover song associated with the annual theme. This year it’s the “500 Greatest Era-Defining Songs of All Time.”

Rifkind and a few friends sat down to hammer out the set list, with R.E.M.’s “It’s the End of the World as We Know It (And I Feel Fine)” coming in at number 500 and Nirvana’s “Smells Like Teen Spirit” coming in as the single greatest era-defining song at number one on a list Rifkind promises is “as nerdy as possible.” Several Athens bands are on the bill this year, from past performers like Dead Confederate with their take on Neil Young’s “Rockin’ in the Free World” to newer acts such as Reptar performing New Order’s “Bizarre Love Triangle.”

Reptar’s Andrew McFarland says his band originally agreed to participate in 500 Songs for Kids as a favor to Rifkind, but became more interested after learning more about the foundation’s goals.

“I guess it just feels really nice to expand music, which is this huge thing that everyone gets so wrapped up in, to benefit these kids who don’t have a chance to get wrapped up in anything,” he says. “And if anyone has ever worked with kids, they know that kids think anything you do is the coolest thing on the face of the planet, which just makes everyone involved feel amazing.”

McFarland’s upbeat attitude is a large part of what Rifkind looks for when selecting bands to perform in hospitals and at the event.

The event has also served as a breeding ground for new collaborations. Athens’ own Supercluster actually formed as a live band at a previous 500 Songs event.

“Supercluster came together to play live at 500 Songs for Kids very soon after our team was assembled,” says singer Vanessa Briscoe Hay. “Josh Rifkind called to ask if Pylon was available. I said ‘no, but I have a new recording project.’ I talked to the other members, and they wanted to help out. This was our first live show, and we performed ‘Maggie Mae.’ We played the next one, too, and performed ‘Gloria.’ Last year we weren’t unable to perform, but we’ll be back this year… My daughter Victoria attends Camp Sunshine, which is one of the special needs kids’ camps that is benefited by 500 Songs for Kids. Needless to say, the charity is close to my heart.”

Other local bands who first hear about Songs for Kids through the massive fundraiser go on to volunteer their time with the program as well.

“[The Songs for Kids Foundation] had us go into hospitals and entertain kids a few times,” says Dead Confederate bassist Brantley Senn. “I was blown away by how many kids love Hannah Montana. She’s huge… So yes, we know how to play Hannah Montana. Please don’t request it though. Or, do.”

Surprising covers like this are actually a big part of the draw and charm of the 500 Songs event as well. Often times it’s the bands that are most surprised by their own potential and versatility.

“They might not know they can do a song, but we have a good sense about bands,” says Rifkind. “We had Modern Skirts do ‘Fight the Power’ by Public Enemy.”

If you think that seems… unconventional, just wait ’till the boys tackle “Like a Virgin” this year. Other local highlights include Futurebirds taking on Smokey Robinson, The Orkids putting their electropop to good use with a cover of “The Sign” by Ace of Base, the always soulful Kyshona Armstrong perfectly paired with Marvin Gaye’s “Mercy, Mercy Me,” Five-Eight rocking and rolling all night with KISS, and a surprise cover by Andy LeMaster and Maria Taylor!

Even if you can’t make it for the whole 10 days, it’ll be worth the drive any night to catch a glimpse of this incredibly ambitious and entertaining affair.

The Heart of a Good Song