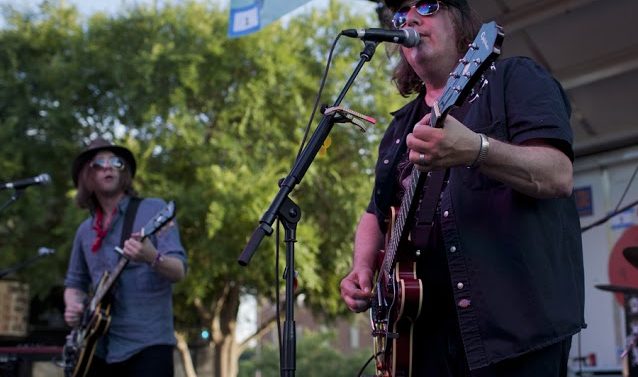 There may not be a better up-the-gut rock band in Athens than Five Eight. Having been around for two-plus decades, the band remains as tight as ever, offering chunky riffs behind Mike Mantione’s manic songwriting. After blasting out of the gate with “Magnetic Fields,” from Five Eight’s eponymously titled album, the band roared through a few songs from their forthcoming release. “Palace Estates” sounded especially refined, due in no small part to the guitar chops of Sean Dunn and the low end being held down by bassist Dan Horowitz.

Consummate wordsmith Jack Logan joined the band at the halfway point for a collaborative effort on a few songs, offering assistance on a new tune called “Keep on Truckin’” about the chore of selling merchandise while on tour. Betsy Franck joined the band and Logan for an inspired but charmingly clumsy rendition of the Stones’ “Gimme Shelter” to close out the set. Drummer Patrick “Tigger” Ferguson was calling for Mantione to get his guitar right during the song, but it only slightly seemed to distract the crowd. It was a reverent cover, all told.

Judging from the number of gigs he’s played in town over the past year, it would seem that Kevn Kinney of Drivin’ N Cryin’ still has a soft spot in his heart for Athens. Midway through DNC’s set, Kinney thanked Five Eight, dedicating two songs to them for their longstanding service to the Athens music community. Kinney also took to scorning Athens for allowing all of the new multi-story buildings to crop up since the last time he was in town. He made a clear call for the everyman and everywoman of Athens to be vocal about their beliefs in order to preserve downtown Athens’ unique character.

After a searing performance of “Honeysuckle Blue,” with lead guitar harmonies that sounded a little like an alt-country version of Iron Maiden, Kinney graciously turned the limelight over to guitarist Aaron Lee Tasjan, who sang a song from his own recent solo release. Following “Turn” from DNC’s recent release, Songs for the Turntable, the band returned for an encore. Singer-songwriter Angie Aparo joined the group for the tail end of the set, inserting the wind-down to “Let it Be” into “Honeysuckle Blue” and staying on the mic for “Straight to Hell.”

Athens Power Rankings for the Week of June 23