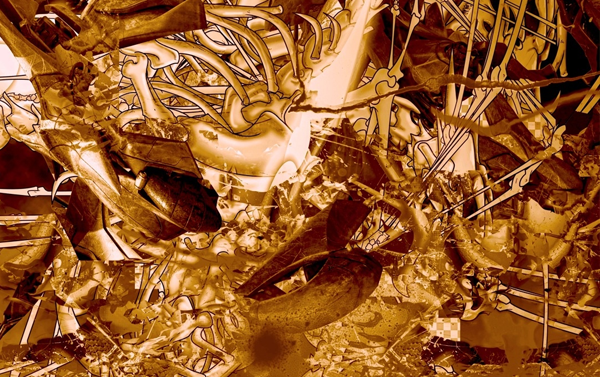 With the semi-regular feature .ext e n s i o n, Will Cash reaches deep into the Internet to map electronic sight and sound.

In part three, the stylistic threads between artists are a little more stretched while the cultural ones run a little tighter. These artists bring a powerful and refreshing sense of international queer culture to their work. That said, the content isn’t niche or constrained by that quality. The tracks released by these men are elite examples of the genres they work in and most of them are forging entirely new hybrids of their own. Here you’ll find some of the most creative variations on dancehall, ballroom, vogue, house, rap, cumbia and anything in between.

REEZLAH DEEJAH. Ragga blend master and Boston expat Rizzla is one of my favorite working musicians. He exhibits a localized understanding of international subgenres and injects his high-tempo swerve to the mix. Coining the descriptor Kunq (cunt/crunk/queer/punk), along with his partner in crime Blk.Adonis, his tracks swirl the light with the dark in an irresistible blend of rap divas with soca, hardstyle, house and bounce. Expect big tings from this Fade to Mind artist and more from us about him in the future.

SoCal superfreak Ashland Mines has been there and done it. Mines is worthily heralded as one of the most creative working deejays. His style paves the way for dark, unsettling circumstances to find a more natural place on the dancefloor. Not only is he master of these crossfaded juxtapositions, he is also a curator, organizer, promoter, visual artist and cultural philosopher of the most experimental persuasion. His CV contains an extensive list of collaborators, including Ryan Trecartin, and projects like the internationally infamous club night, Wildness. “I make environments for humans—fish tanks where fishes can be happy and well-fed.”

The geographical history of J’Kerian Morgan does a lot to describe his sound. He was raised in Houston and currently resides in Berlin. His tracks have an enigmatic and engaging quality that emanates from their dark, propulsive and relentless rhythm. Alternately confusing and entrancing (more voodoo, less bliss), he blurs the line between hooks and abstraction. “I love playing with people’s emotions at the club. I want people to go from wanting to murder me to wanting to pay my bills. Like multiple times in a night.”

Elijah Crampton, the beloved subject of our only interview thus far, is E+E. This amorphous project incorporates Latin rhythm, minimalist keyboard composition, pop or pop-style vocals and an aggressive, highly detailed commercial sample texture. The tracks have a spiritual concern for beauty and a knack for casually astonishing you once you’ve entered their space. This music beckons you to stand in the middle of its dys/utopic electrical storm, and you’ll find yourself entering without even realizing.

MikeQ is the most prominent ballroom DJ right now with good reason. His hands are all over the world, even working with Missy. It’s hard to hear a ball set without catching some of his Jersey slant in the mix. Mike consistently produces large, deep-throbbing constructions using only the essentials. The space he leaves in between creates an irresistible swing that can stay fresh, on repeat all night.

More #Kunq indefinables. False Witness also imbues a heavy Latin flair to his tracks and mixes, but unlike e+e, he stays closer to the dance. “Island Industrial” is his most recent label’s descriptor of blends including hardstyle, dembow, dancehall, rave, urbano and house.

This NY-based collective of artists—designers, dancers, performers—uses its Soundcloud to post aggressive, intentionally negligent, queer-rap overdubs of popular tracks. MC Dosha Devastation artfully flips the content of tracks by people like Chris Brown or Future into dark, graphic, sexy anthems—accenting and commenting on the original tracks that are stomped underfoot. Bel-Ami, a role-reversal of DJ Khaled’s “Take It To the Head,” offers the linguistic satisfaction of sticking one right in Breezy’s mouth.

Beek is a rising, recent addition to MikeQ’s Qween Beat crew. The semi-mysterious producer uses his own voice and a Jersey twist to elevate his ballroom beats into their own unique space. Tracks like “Feel It” and especially “Higher (Blow Ya Smoke)” have an unfamiliar yet irresistable swing to their gait. Beek’s is a disorienting and engaging take on vogue house.

Sugur Shane seems to have been around the ball scene a little longer. He hails from Philly. Shane’s productions stay a little closer to a vogue sound that most people will be familiar with, but they are still fresh and evolving. His work with the inimitable Divoli S’vere is essential.

Nothing needs to be said about the strength and versatility of Michael Quattlebaum. This is radical, androgynous, ghetto-punk rap that shapeshifts with artful authenticity.

Ruby the RabbitFoot: New as Dew