Behind the Scene: Cartter Fontaine 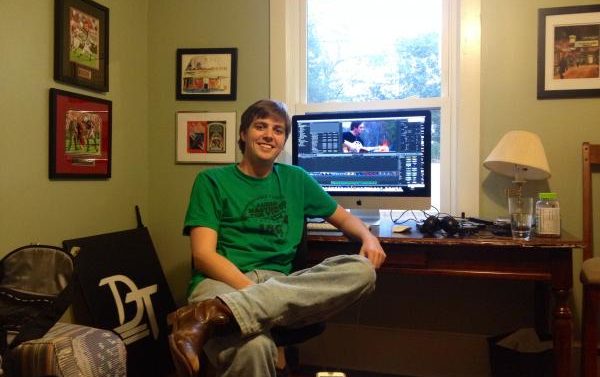 [Editor’s note: Yesterday, we previewed our new web series. Today, we’re kicking things off by featuring one of the folks who will be assisting us in our new endeavor.]

Who he is: Cartter Fontaine

What he does: President of Dirtty Toe Productions

Flagpole: Tell us a little about Dirtty Toe and how it got started.

Cartter Fontaine: I was living with Sam Birdsong and Kelly Smith when I started doing video stuff, and they got on board because we were just having fun. Sam helps more on the business side. Kelly helps more on the video and editing side. Andrew Levy is also involved with business development, going out into the community and meeting prospective clients. Now, we have an intern from the UGA Music Business program, Rance Nix.

We’ve been shooting video stuff around town for about two years. About a year ago, we really turned a corner. We could do this as a hobby and do it for free all we want, but this is an actual need that people have, so we said, “Let’s turn this into a real business.”

What brought you to Athens?

My dad went [to UGA]. My brother went here. I’ve visited Athens since I was a year old, so I’ve always loved the place. It pretty much wasn’t a question that I was going to move here when I went to college. I got into college, moved here and never left.

Can you talk a little bit about your training with video production?

It’s pretty much all been hands-on, trial by fire. It started as a hobby—making video on trips. At that point, I was interning with Create Athens. I started a project, which was creating two- to three-minute videos with different creative folks around town. And I just kept learning along the way… Now, I feel comfortable enough to say that I have a sound knowledge of it.

The most badass thing I’ve shot was with Deadwood Guitars, which was about 15 minutes of footage, following the tree being cut down to the guitar to being built. The day they were chopping up the wood with Billy Bridges, who runs the saw mill… the guy running the chainsaw had sawdust flying everywhere. That’s when I said, “This is addicting.”

The goofiest thing? We’ve been doing some things with the guys over at Dawg Gone Good BBQ. That crew is crazy. They’re funny, and they are so much fun to be around. Hanging out there at 2 a.m. sober, with a camera, watching everyone, is so much fun.

What is it about Athens that impresses you the most?

The most impressive thing about this town is how easy it is to be impressed. We could be filming for one band and then the opening band will blow you away. There’s so much great music around. We’ve done work with AthFest for the past two years, and we filmed at every venue and the outdoor stages. Going around to 13 different venues with a camera and just enjoying the diversity of the music out there—that’s been the most impressive thing, I think. The way that it is sustaining itself.

Do you have advice for bands looking to commission videos?

My best advice would be to find some of your favorite bands in town and check out their Facebook pages and see what they are up to, in terms of video. There are plenty of people around town that love to pick up a camera and work with bands. That’s how we get jobs with bands. It’s just as simple as finding bands that have had that sort of work done and reaching out to them.

What makes a band successful?

You’ve got to have a good personality onstage. Obviously, the music is important. But being comfortable on stage and engaging with the crowd is also important. Athens has so many bands with such good music, but it’s easy for bands get lost in the shuffle. I think standing out in terms of personality and engaging people really makes a difference.

Check back in two weeks for another edition of Behind the Scene.

UPDATE: Trucks May Be Detouring Through Athens During the Ice Storm