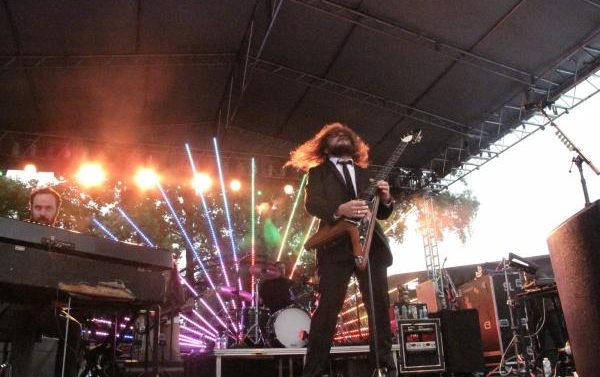 Before I stepped into the mud among several thousand committed fans, I was a little disappointed that the inaugural Shaky Knees festival was being so torrentially rained on. Driving into Atlanta was, of course, especially hellish in the slosh of stop-and-go traffic. Wearing my most substantial rain gear and excited for a weekend of shows by some of my favorite artists, I was determined not to be a poor sport.  That seemed the general sentiment of the crowd members, who were playfully skating through the thick mud and doing rain dances.

Aside from a few indoor VIP shows, the festival performances were divided between three stages in Atlanta’s Historic Fourth Ward Park and the Masquerade Music Park.  I feared that, like most things in Atlanta, it would be difficult to navigate from one place to another.  But the movement from one stage to another was easy, even with the added obstacle of slippery surfaces.

The early afternoon shows set the precedent for a day of superior performances.  Roadkill Ghost Choir, whose sound is chilling and eerie, played in keeping with the weather, and Moon Taxi picked up the tempo for fans whose spirits couldn’t be dampened.  Lucero played their many songs meant for drinking as the festival attendees put on their beer jackets.  These shows were fun, but two acts that followed made standing in the rain feel worthwhile.

The sun should never shine while Gary Clark Jr. plays the blues.  The man was so smooth in his every motion, smiling modestly as he took the stage and looked out at a crowd clad in ponchos, garbage bags and soggy jeans.  His guitar playing was expressive of such raw emotion, that it was only right that we listen in the cold, pouring rain.  I would like to think that Robert Petway intended “Catfish Blues” to be played for people submerged in some kind of wet misery, and Gary Clark Jr.’s rendition came at the climax of his set.  His playing was so sensual that it sent the crowd into frenzy.  People bobbed their wet hoods and made out with whoever would let them.  And it was all the better for the rain.

Jim James took the stage next.  Whatever religious conclusions James has arrived at have carried into his presence onstage.  His performance was otherworldly.  He opened his eyes wide and motioned with his open palms and spread fingers as his pure and powerful voice echoed over the park.  He thrashed his voluminous hair and hopped across the stage in a strange contrast to the other accompanying musicians, who were completely stationary.  At one point, he walked to the back of the stage to rest his hand on a large gold figurine of an indistinguishable animal.  He then carried on with a saxophone performance.

By this point, I had learned which pieces of my own ensemble were not, in fact, waterproof.  Worried for the equipment that was in my bag that was getting soaked through, I left after Jim James.  Sunday, I returned, fully prepared to endure another day of great music in the pouring rain.

Next up: Kurt Vile, Dr. Dog, The Lumineers and more.