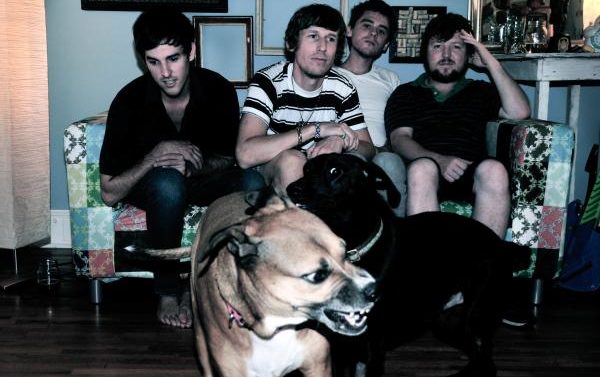 After a final handful of shows, local pop heroes Modern Skirts will hang it up—for good, they say. Flagpole chatted with the band’s guitarist and pianist JoJo Glidewell about what he’ll take away from the band’s 10-year run.

Flagpole: What’s first on the agenda now that done with Modern Skirts?

JoJo Glidewell: I’ve been working with of Montreal for about a year now… I’m guitar tech-ing, and then they dress me up, and I’ve been playing with them a little bit recently. So it’s this like kind of getting to do everything sort of job and they’re great to tour with, and I’ve been enjoying that a lot.  Also, I’m in a cowboy choir that just started this week.

FP: Do you feel free from the responsibility of Modern Skirts?

JG: I was talking with a friend of mine who also used to be in a band that just broke up a little while ago and we were just talking about how we don’t want to be responsible for anything right now. After years and years of being responsible, it’s nice to do something with a band where it’s like, “I just have to do this,” and then everything else gets taken care of by somebody else.

FP: Is it a break instead of a break up?

JG: I don’t think so. I mean, I really don’t want to [get back together], out of principle. I don’t want to be one of those bands that’s like, “We’re breaking up,” and then a year later it’s like, “Reunion album!” you know? It just seems like you’re [being] disingenuous for publicity… I don’t want to be like 60 years old and playing Modern Skirts songs.

FP: Do you think that you’ll move out of Athens?

JG: I don’t think so. If there was some reason to, maybe. I talked forever about moving to New Orleans, and I used to want to move to New York, but I think that’s like an early-20s type thing. I love going up there for weeks at a time, but I don’t have any interest in moving up there. Athens is fine. If I ever stopped touring, I would probably move. But it’s magical here, and if you get out every few months and go see the world, and come home—it’s like the best place to come [home] to.

“I don’t want to be like 60 years old and playing Modern Skirts songs.”

JG: Not totally different, but it’s like everybody’s in a great mood, and everybody is having a great time. If something goes wrong, and you’re on the road for months and months, it gets to the point where somebody misses a note, and you’re like, “What are you doing?” And now it’s just like, hmph, whatever.  So, it’s cool.

FP: What will be your fondest memory?

JG: There are a lot of them. I remember the first time we heard our first record finished, and it was like, I’ve always heard from people—I don’t have any kids, but I’ve always heard from a lot of people that when you see your kid for the first time, it catches you off guard, the emotional response that you have to it, and I definitely feel that… It was that same kind of thing of like, we’d been mixing the record, and it was like, alright, let’s listen to the whole thing, and we put it on, and we all just stood there. It was us and our manager at the time, and it was so intense and crazy. Just to be like, that’s it; that’s us. That doesn’t feel like us; it doesn’t feel real. It was such a headfuck, in a great way, but it was crazy. That will be there forever.

FP: Did you end on amiable terms with each other?

JG: It’s so amicable between us. I think a lot of people were concerned about that. It’s been sort of gradual.  Outside of the band, our social lives have demerged to a greater extent. It’s definitely different than it used to be, but it happened so gradually that we’ve all been doing our own thing for a while now, and we get together still to play shows. It’s funny, but it is nice that we’re still making an effort to see each other, because that will have to be done once we’re not practicing or playing together anymore. We’re brothers after everything we’ve been through.

FP: What have you learned from the experience?

JG: I think that it’s taught us a lot… How is it that you can hate somebody and still love them? We all know that really well. It’s funny, because in that token, people that tour all the time are notoriously hard to be in relationships with, but I feel like we’re so good at it, because we have to do it with so many people. When you’re on tour, you can’t get away from people for very long. You have to learn how to take your space and give other people their space and make that work.

FP: So now you’re all well equipped for marriage?

JG: When you say it that way, it makes me feel really uncomfortable. But I guess that’s what I’m getting at. I’m way better at interpersonal relationships than I was before the band. It teaches you a lot about how to get along with people in close quarters.

FP: What is the ultimate sentiment that you’re walking away with?

JG: I think overall, I don’t know, I just feel really grateful. I think sometimes when you’re in the thick of everything that maybe you don’t appreciate things as much as you should, but I do. And even at this point, looking back on it I’m grateful even for the criticism that we got; I’m thankful for the people that made us have tough skin. I’m super grateful for everything that happened really, as a whole.