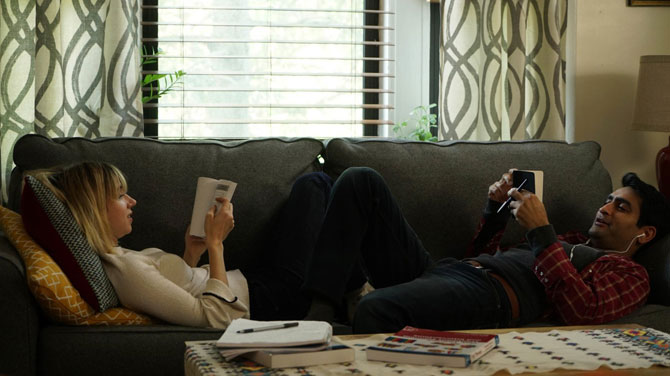 Summer’s biggest surprise and best treat may wind up being this cracklingly brilliant romantic comedy depicting the troubled courtship of comic Kumail Nanjiani (played by the real-life Nanjiani) and his wife-cum-co-writer, Emily V. Gordon (Zoe Kazan). After they date briefly and then break up, Emily comes down with a mysterious illness that leaves her in a coma, leaving Kumail to struggle with his reawakened feelings for her, as well as her sweet, troubled parents, Beth and Terry Gardner (Holly Hunter and Ray Romano).

Nanjiani and Gordon’s script lands its jokes with tear-inducing accuracy, and Nanjiani unexpectedly anchors the dramatic bits like a young, Pakistani Tom Hanks. Though Emily disappears for the middle chunk of the movie, Kazan has the right blend of brains and cute quirks to keep Zooey Deschanel up at night. Somehow, even in the only a producing capacity, Judd Apatow manages to let things go a bit too long, but that wee bit of criticism is all I can muster for the indisputable highwater mark of Michael Showalter’s brief directing career. (The “The State” alum showed promise with The Baxter and Hello, My Name Is Doris).

The Big Sick will dominate many a year-end best-of list, so you might as well see it now; it will probably be one less Best Picture nominee you will have to watch come February.