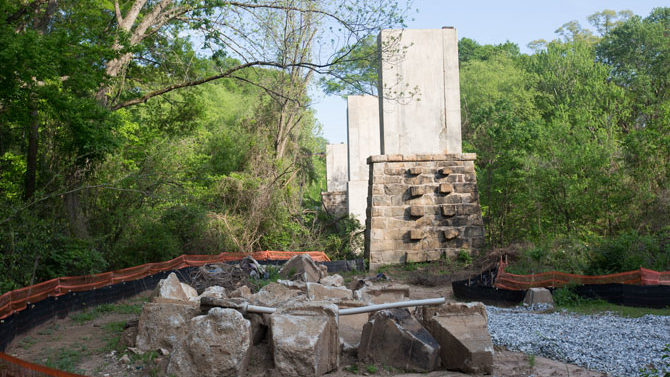 “I’ve gotten old” since Firefly Trail was conceived 17 years ago, Dorothy O’Niell told the Athens-Clarke County Mayor and Commission last week, and she’s not the only one. The rails-to-trails project along the abandoned Georgia Railroad parallel to Oconee/Oak Street has been through three mayors—soon to be a fourth—and 28 commissioners, O’Niell noted. Harry Sims is the only current commissioner who was around in 2000.

It looks like Athenians might have to wait a little longer. As a vote on a final project list for a November transportation sales tax referendum looms Aug. 1, commissioners are considering cutting Firefly Trail—again. The group promoting it applied for $24 million, which a citizens advisory committee cut down to $17 million. Now, the commission may cut even further, to a little under $12 million.

The first mile of the trail—between Dudley Park and the Loop—is under construction now. But whether it can be completed all the way out to Winterville, say, within Sims’ lifetime is an open question.

“There is a great need for the trail right now,” said Mark Ralston, chairman of Firefly Trail, Inc., a nonprofit that’s working to extend the trail through Oglethorpe and Greene counties, noting that two cyclists have been killed and another seriously injured while riding near the future trail’s route. It can be finished to the Clarke County line for $11.6 million, Ralston said, but only using a “least cost” surface like crushed stone.

Vice Chairwoman Mary Hunnicutt Cook told commissioners she’s afraid $11.6 million would only be enough to complete the trail to Hancock Industrial Road—a manufacturing area in the middle of nowhere—which won’t draw tourists or be a true transportation alternative, she said.

O’Niell, meanwhile, wanted to make sure that a pedestrian bridge over Trail Creek (to replace the half-demolished Murmur trestle) would be prioritized, so that users won’t be forced to bike down into Dudley Park and back up again. “This bridge will be… the nexus of our own Spaghetti Junction of greenways,” she said.

It’s true: Dudley Park is where it all comes together. That’s where Firefly Trail will intersect with the North Oconee River Greenway. Plans call for an underpass at Oconee Street connecting Firefly Trail and the existing portion of the Greenway with the next phase, which broke ground in May and will run south through the University of Georgia campus to College Station Road. Spurs will connect the park-and-ride lot at Oconee Street and the Loop to both Firefly Trail and the Greenway, another connection point.

But the Greenway, too, is facing a potential T-SPLOST cut. The Oconee Rivers Greenway Commission initially asked for $12 million. The citizens advisory committee recommended $12 million, which commissioners are considering dropping to $10 million. Greenway Commission Chairman Nat Kuykendall told commissioners he’s “disappointed,” but “we can do a lot with $10 million.”

With all the talk lately about how those living outside the Loop don’t get their fair share, these are two projects that will benefit primarily people living in “the county” (pre-unification). They will enable Eastsiders and Winterville residents to commute by bike to jobs downtown and on campus, and the Lexington Road corridor will reap most of the economic development benefits of Firefly Trail.

“It’s always felt isolated from Athens,” Winterville resident Timothy Pierce-Tomlin said of his hometown. “If you didn’t have a car, you felt stuck.”

Projects benefiting cars would be left untouched under the project list proposed by Commissioner Mike Hamby at a work session earlier this month—including $25 million for road repaving, which many have argued should be included in the general fund. There’s nothing “special”—as in “Special Purpose Local Option Sales Tax”—about routine road maintenance.

Nonetheless, roads have a few fans on the commission. “This will benefit more people than any other project on the list,” by funding 260 repaving projects, Commissioner Jerry NeSmith said.

But if they cut walking and biking projects while leaving roads untouched, commissioners risk losing crucial votes—as well as a rebellion from the citizens who drew up the list and will be responsible for selling it to the community. “This list is not as balanced as when we presented it to you,” said Lauren Blais, a member of the CAC. “It’s up to the citizens advisory committee to promote this list, and we really need to feel excited about it.”

The Hamby Plan is not set in (crushed) stone yet. It got a little pushback at the July 18 meeting. “We need to hold to what our citizens advisory committee brought before us,” Commissioner Jared Bailey said.

Commissioner Kelly Girtz held out hope that, if T-SPLOST pays for right-of-way acquisition and the at-grade crossing, there will be enough money left over from SPLOST 2011 to pave the trail, because the new jail came in under budget.

What would the money cut from Firefly Trail and the Greenway fund? Much-needed pedestrian safety improvements along West Broad Street—which really ought to be GDOT’s job, but whatever—as well as a new Tallassee Road bridge and a roundabout at the Milledge Avenue-Whitehall Road intersection. Worthy projects, sure, but then again, no one has shown up at a meeting to ask for them. Why fund them at the expense of two popular and potentially transformative projects?

The commission is holding one last work session to discuss the project list today, Tuesday, July 25. The final vote is Tuesday, Aug. 1.