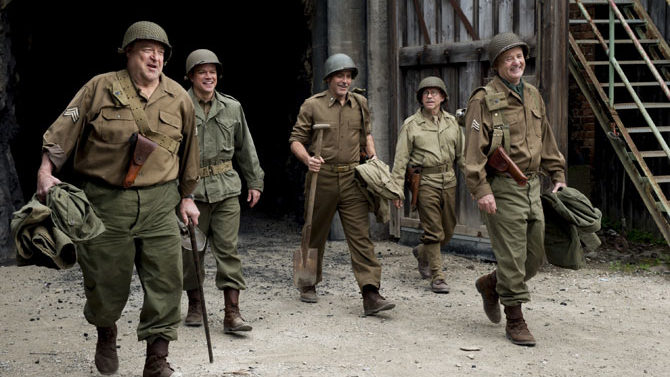 THE MONUMENTS MEN (PG-13) When Steven Spielberg’s Saving Private Ryan and Terrence Malick’s The Thin Red Line were both released in 1998, the approach major Hollywood filmmakers took to visualizing World War II changed drastically. The violence of the war became immediate, visceral and unlike anything we had seen before on film. That trend lasted for a good decade and then some, but when Quentin Tarantino detonated his cinematic bombshell that was Inglourious Basterds (2009), realism ended and the fantasy of warfare usurped all.

Director/actor/co-screenwriter George Clooney (writing along with screenwriter Grant Heslov),  crawls back decades stylistically in The Monuments Men, a war drama about how the U.S. armed forces sent a crew of art historians and scholars to reclaim some of the most prized works of art from the Nazis. The movie is based on the 2009 book of the same name by Robert M. Edsel, The Monuments Men: Allied Heroes, Nazi Thieves and the Greatest Treasure Hunt in History. It’s a compelling, exciting and fascinating story, and a great departure from any preconceived view of the war.

Clooney, always a perfunctory director, does not take total control of the material, though. Despite a stellar cast of solid character actors including Bill Murray, John Goodman, Bob Balaban and Hugh Bonneville, and the star power of Matt Damon and Cate Blanchett, The Monuments Men feels underwhelming at times. There’s something refreshing about Clooney reaching back to directors like J. Lee Thompson (The Guns of Navarone), John Sturges (The Great Escape), John Frankenheimer (The Train) and Robert Aldrich (The Dirty Dozen), but there’s a timidity to the direction that is disappointing considering the subject matter. Clooney yearns to channel a war drama with the classic attention of Howard Hawks, but he overall lacks Hawks’ ability to capture moments of genuine humanity.

Murray and Balaban earn the best moments, playing characters at odds with one another but forced into this unique situation. It’s dry comedic fodder, but their scenes together chime with low-key energy. The Monuments Men is not a bad movie by any means. It’s thoroughly enjoyable and a respite from the current trend in American commercial cinema to construct reality as a cartoon, but Clooney nevertheless seems unable to get a handle on the material. He earnestly strives for higher meaning but consistently lands face first in the battleground of pretension. Where’s John Wayne when you need him?