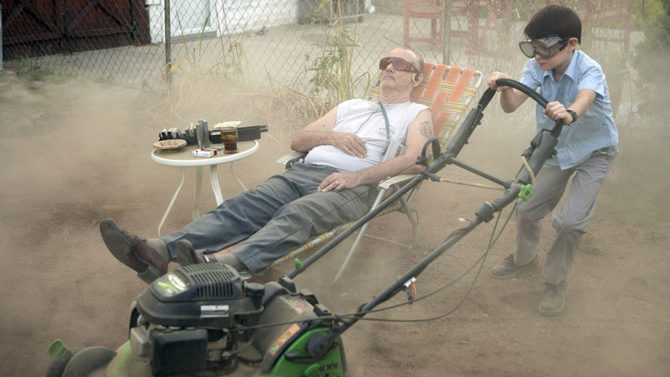 There’s nothing in St. Vincent that you haven’t seen in movies or television numerous times before. Old, grouchy bastard named Vincent, this time around played by Bill Murray, spends his days and nights mostly boozing, gambling, chain-smoking and attempting to hide from loan sharks. He also likes to while away the time with a pregnant Russian prostitute (Naomi Watts), who genuinely seems to care for him. But Vincent’s life takes a dramatic turn when single mom Maggie (Melissa McCarthy) and her 12-year-old son Oliver (Jaeden Lieberher) move in next door. Vincent and Oliver become friends. The grizzled old man teaches the wide-eyed boy about alcohol, gambling, strippers and standing up for yourself. The boy teaches the old guy about trust and responsibility.

First-time writer/director Theodore Melfi is not interested in overturning clichés or undermining stereotypes. But St. Vincent does have  something very special going for it: Bill Murray. It’s been years since Murray has made a full-on comedy, so his return is great to watch. The deadpan delivery, wise eyes and bad attitude are on full display throughout the movie. But what Murray also brings to the role is his old sense of silliness. He has been better in much better movies (Lost in Translation, Broken Flowers, Groundhog Day), but he delivers the goods here.

McCarthy, downplaying her over-the-top screen persona in movies such as Bridesmaids and Tammy, is refreshing, though underwhelming. The completely thankless role, however, unfortunately goes to Watts. She’s good in it (check out that accent!), but her character is a clichéd one, proof that Hollywood doesn’t have a clue what to do with actresses in their 40s and older. It’s a shame. Young Lieberher and the always dependable Irish comedic actor Chris O’Dowd (who plays a helpful, kind-hearted priest) fare much better.

St. Vincent lacks originality. But it is reliably funny and entertaining in its unambitious way. Sometimes, especially if Bill Murray is involved, that’s enough.