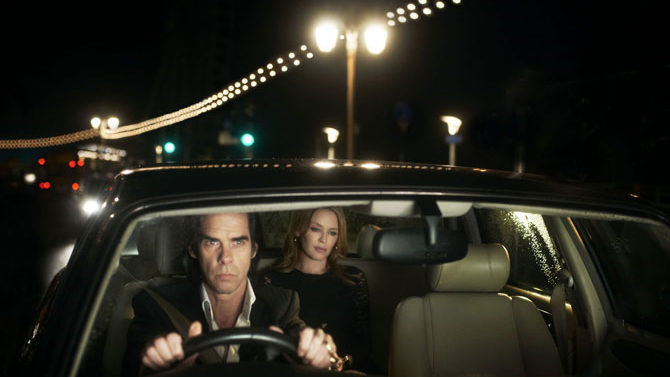 This unconventional documentary of Australian-born rock crooner/songwriter Nick Cave may alienate fans looking for something a little more straightforward, i.e. a traditional linear portrait of an artist with plenty of salacious road dog tales, bouts with debauchery and booze/drugs and plenty of performance clips. What stories of drugs there are in 20,000 Days on Earth, directed by first-timers Iain Forsyth and Jane Pollard, are mentioned briskly and dropped. Sex is also flirted with and then discarded in Cave’s conversation with British psychoanalyst Darian Leader. Instead, the filmmakers are more concerned with recreating Cave’s life in Brighton, England, in all its mundane, mythic and artistic details: one day in the life of an artist.

We observe Cave’s waking moments, watch him drive from appointment to appointment, work in his study, rehearse with his band the Bad Seeds in the studio during the recording of his last album Push the Sky Away and drive around by himself or with a few friends (actor Ray Winstone, longtime co-collaborator/ex-bandmate Blixa Bargeld and pop star Kylie Minogue), who suddenly appear like ghosts and disappear just as quickly. Which is appropriate, considering that Cave, in his voice-over, talks eloquently and perceptively about memory and how it relates to his life and work. “Memory is what we are,” Cave says. “The sole reason to be alive is your memory.”

The best moments and the most revelatory are the quieter ones. Forsyth and Pollard recreate Cave going through his archives and sharing a lunch of fried eels at the house of bandmate Warren Ellis. Ellis giddily gossips about a terrifying encounter with the late Nina Simone and watching an old Jerry Lee Lewis still raising hell on stage. At the archives, Cave looks at old schoolboy pictures and stills of a volatile performance by his old band The Birthday Party. Both are intimate moments, scraping away the mythic artifice of Cave’s work and simply showing a middle-aged rocker being human and reflecting on what that exactly means.